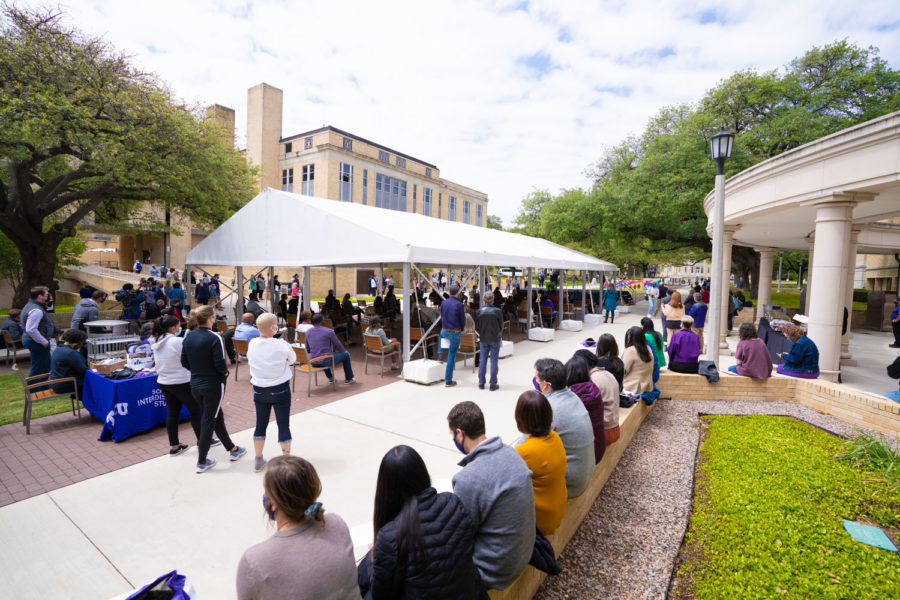 TCU will place signs addressing its history with slavery, racism and the confederacy on campus and plans to feature the history of students of color at the university more prominently during admission tours.

These were just two of the several plans for action outlined at the first Reconciliation Day on Wednesday.

The day was a culmination of the Race and Reconciliation Initiative’s (RRI) nearly yearlong academic effort to examine TCU’s history.

The RRI committee released their findings and action plan at the event, which occurred behind the Founders Statue.

The committee, composed of 30 members, has been active for the past nine months doing work to help reconcile TCU’s history with racism, slavery, and the Confederacy. 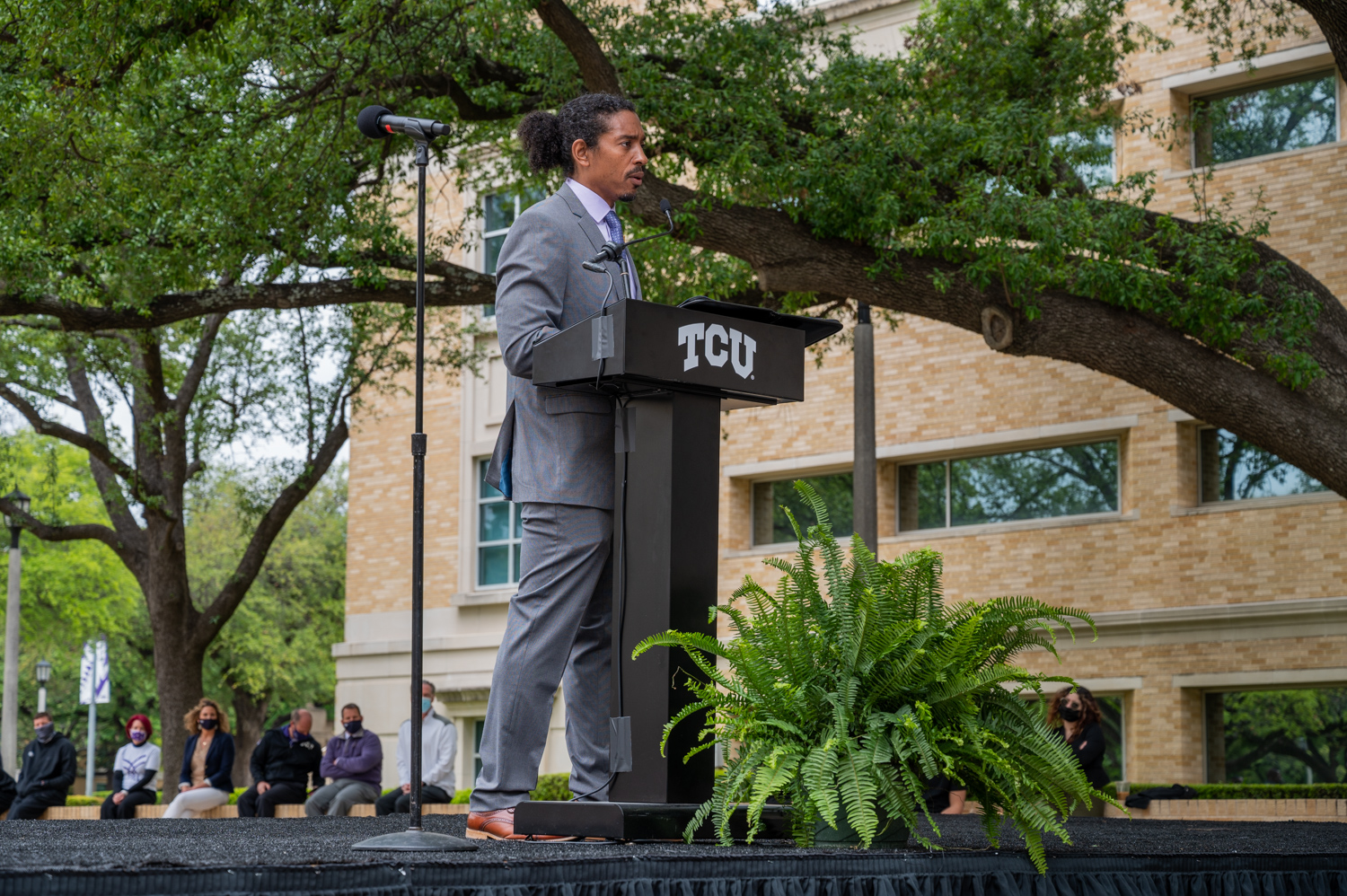 “We have an opportunity to use our history as a compass to guide us forward,” said Dr. Frederick Gooding Jr., chair of the Race and Reconciliation Initiative. “Reconciliation is not only for RRI. This truly must be everybody’s cause if we want to become the TCU that we want to be. Nobody can do everything, but everyone can do something.”

The event was divided into an hour of contemplation and an hour of commemoration. The commemoration portion included the presentation of research findings, recommendations for how to proceed, and the announcement of changes to come in the years ahead.

A first-year survey report was released shortly before reconciliation day began and detailed what the committee found out about TCU’s history.

The committee had separate task forces to develop recommendations for how the university should utilize the research. These task forces included slavery, confederacy, segregation, desegregation, voice, good neighbor and repair. 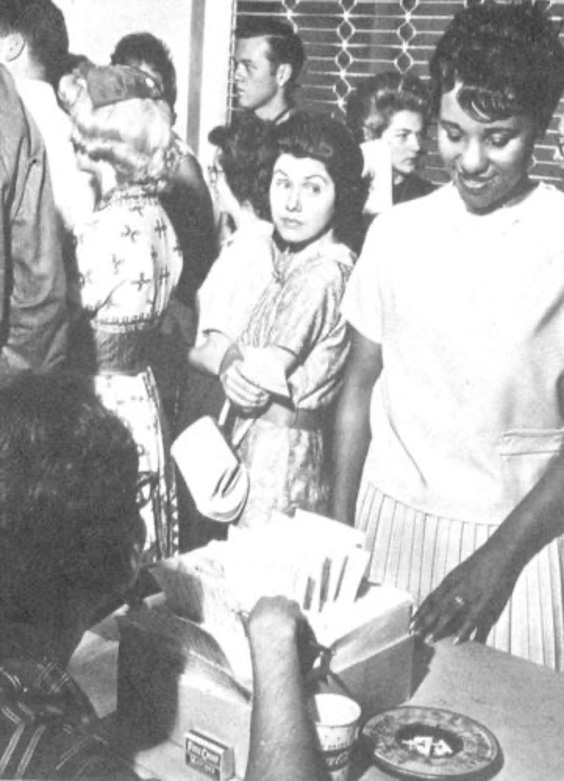 Allene Jones registers for classes at TCU in 1962, graduating the next year, after entering the nursing program as a senior. (TCU Yearbook, 1963)

The report stated that TCU’s founders did not own slaves, but their fathers did, which the university said exposed them to slavery and racism.

The founders did fight for the Confederate Army in the Civil War, claiming that they fought against “invaders from the North.”

The report also detailed evidence of the first Black students who had partial access to TCU. During World War 2, TCU provided background training for military officers, soldiers and pilots that included some Black members.

The university did not fully integrate until 1964 when the first class of Black undergraduates enrolled.

TCU was the second to last school in the Southwest Conference to integrate and all of the members of the first Black class left after just a year. 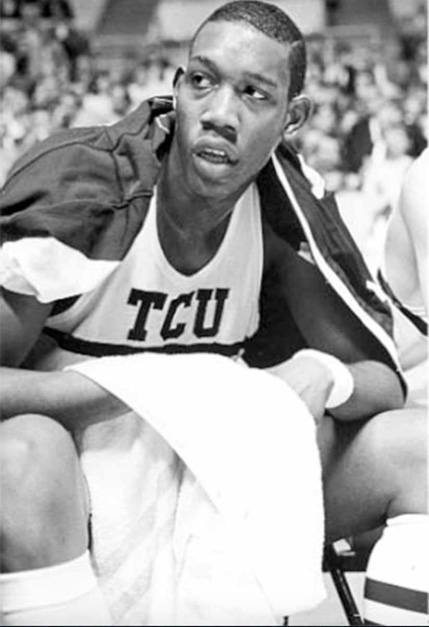 First black athlete to be honored

Reconciliation Day also included an announcement of a new statue.

Athletic Director Jeremiah Donati announced that a statue of Dr. James Cash will be erected in front of Schollmaier Arena.

“Dr. Cash was really one of our biggest and brightest stars here at TCU, and when we set out to acknowledge those former student-athletes and their efforts, we thought it would be fitting to erect a statue of him,” Donati said.

Cash needed police escorts when he played some out-of-state games for the Horned Frogs, according to the RRI’s report.

Reconciliation Day concluded with more plans for actions in the years ahead.

In addition to new signage and a new statue on campus, the RRI committee outlined more actions they want to be taken.

“The unity cord initiative, an idea introduced by Dr. G., is a single graduation cord worn by the class of 2021 that serves as a physical reminder of all we have been through and that which is yet to come,” Shiring said. “It is my sincerest hope that this initiative will continue to bring further healing reconciliation and unification for the Horned Frog family.”

The committee stressed that their work was not done, as this was just the first year of the initiative.

“Broad, cultural change takes time and a willingness to walk in your truth,” Gooding said.

All of the committee recommendations as well as the full historical findings can be found here.