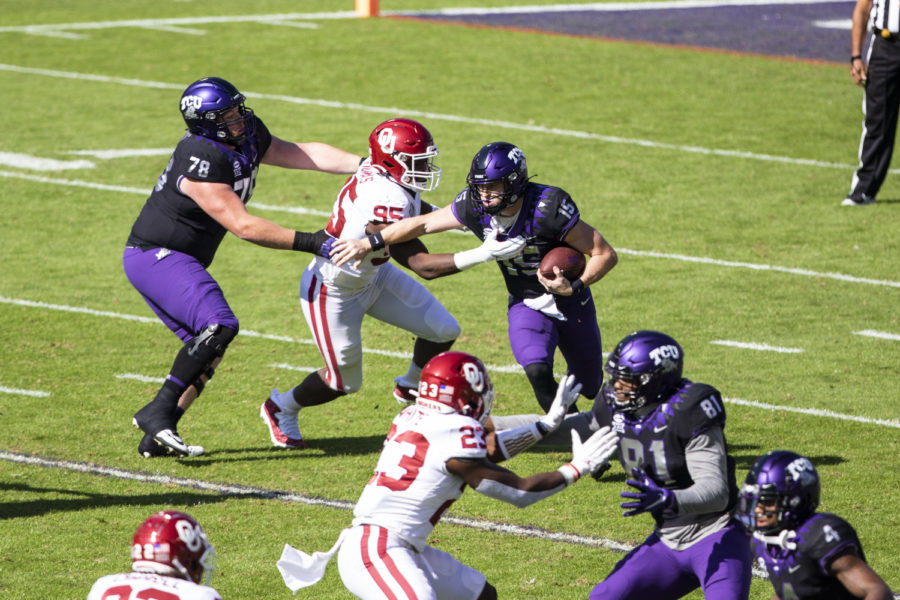 TCU quarterback Max Duggan is pressured in the pocket against Oklahoma on October 24, 2020. (Heesoo Yang/Staff Photographer)

Anyone who has spent time around Gary Patterson knows that the 21-season head coach doesn’t like to get caught up in “the hype.”

“It’s a nice feeling, but the bottom line is, I’ve been in this business too long to get caught up in it,” Patterson said of preseason hype when TCU was picked to win the Big 12 in 2015.

Well, the Horned Frogs were not picked to win the conference in 2021. In fact, they were surprisingly picked fifth, behind teams they defeated a year ago like the University of Texas at Austin and Oklahoma State University.

Nevertheless, TCU has had no lack of preseason honors in the last few months, hinting at the fact that this could be the Frogs’ most successful season since their Big 12 title game appearance in 2017.

Here is a breakdown of every player who has received preseason recognition and the award for which they were recognized:

As he heads into his third season as a starter following his first-ever full offseason, quarterback Max Duggan holds more weight on his shoulders than any athlete in Fort Worth.

Though Duggan has flashed moments of real excellence, 2021 will be the year the Council Bluffs, Iowa, native proves to the nation whether he really is an elite signal caller.

On top of this, the junior has a chance to set himself apart from the TCU quarterbacks that came before him, as he was put on the watchlist for four different awards that have never been won by a Horned Frog.

Three of these awards are for quarterbacking.

The first hits close to home for Frog fans, as Duggan was placed on the watch list for the esteemed Davey O’Brien National Quarterback Award, presented to the best NCAA quarterback each year.

Davey O’Brien is TCU’s lone Heisman Trophy winner (1938), capturing the award in the same year he led the Horned Frogs to one of their two program national championships.

Finally, the junior was added to the watch list for the Maxwell Award, which is given to the nation’s top player annually.

It’s no coincidence the defensive player to join Duggan in going to the Big 12 media days in July was defensive end Ochaun Mathis.

After leading the team with 9.0 sacks last season (Big 12-leading 0.9 sacks per game), Mathis is expected to be the focal point of a TCU defense that could exceed typical expectations for a Patterson-led team in 2021.

These high expectations do not just come from within the program, though, as the junior was the lone Horned Frog to be named an ESPN Preseason All-American.

Mathis was also named to the watch list for the Bronko Nagurski Trophy and the Chuck Bednarik Award, both of which are given to the nation’s top defensive player each year.

Finally, as well as being named to the Preseason All-Big 12 team, Mathis was added to the Rotary Lombardi Award watch list, marking his dedication as a lineman to excellence on and off the field. 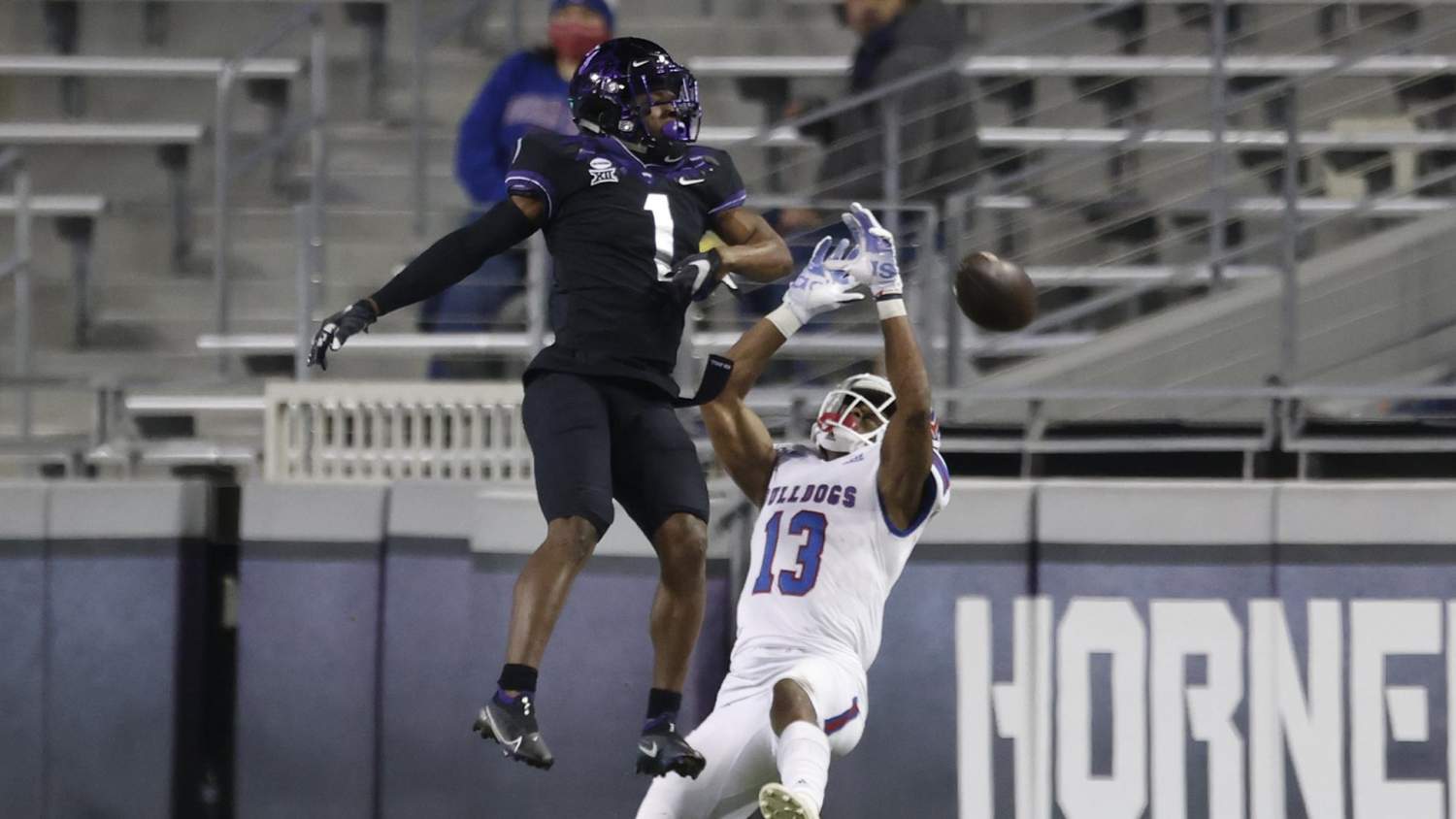 TCU cornerback Tre’Vius Hodges-Tomlinson defends a pass in the Horned Frogs’ win over Louisiana Tech during the 2020 season. (Photo courtesy of gofrogs.com)

Few people live up to the hype of a famous last name as well as cornerback Tre’Vius Hodges-Tomlinson.

Walking in the shadow of his legendary uncle, LaDainian Tomlinson, Hodges-Tomlinson led the Big 12 with 13 passes defended while sporting a 90.6 coverage grade that led all corners nationally in 2020.

Expected to be TCU’s leader in the secondary, the junior joined Mathis on the Preseason All-Big 12 team as well as the watch lists for the Bronko Nagurski Trophy and the Chuck Bednarik Award.

Not only was Hodges-Tomlinson named a Preseason All-American by Pro Football Focus and the Walter Camp Football Foundation (2nd Team), but he was also added to the watch list for the Lott IMPACT Trophy.

The award is given to the defensive player who best exemplifies great play and great character. TCU defensive end Jerry Hughes won the trophy in 2009.

A human Swiss Army knife in 2020, wide receiver Derius Davis adds flavor to a TCU offense that has struggled to find rhythm in its last three campaigns.

To go with 209 receiving yards and a score, Davis averaged 14.5 yards in the punt return game (5th nationally), while returning two punts to the house last season alone.

Because of this, it’s no surprise that Davis was added to the watch list for the Paul Hornung Award, which goes to the nation’s most versatile player each season.

Both of those nods were for Davis’ role as a punt returner.

Offensive tackle Obinna Eze was named to the watch list for the Wuerffel Trophy honoring the highest-achieving player on the field, in the classroom and in the community.

Punter Jordy Sandy was named to the watch list for the Ray Guy Award for the nation’s top punter.

Center Steve Avila was named to the watch list for the Dave Rimington Award for the nation’s top center.

Running back Zach Evans was named to the watch list for the Doak Walker Award for the nation’s top running back.

Long snapper Antonio Ortiz was named to the watch list for the Patrick Mannelly Award given to the top Football Bowl Subdivision senior Long Snapper.

Duggan, Evans and wide receiver Quentin Johnston were named to the watch list for the Earl Campbell Tyler Rose Award given to the player from Texas or playing at a Texas school who best exemplifies the qualities of former Texas running back Earl Campbell. 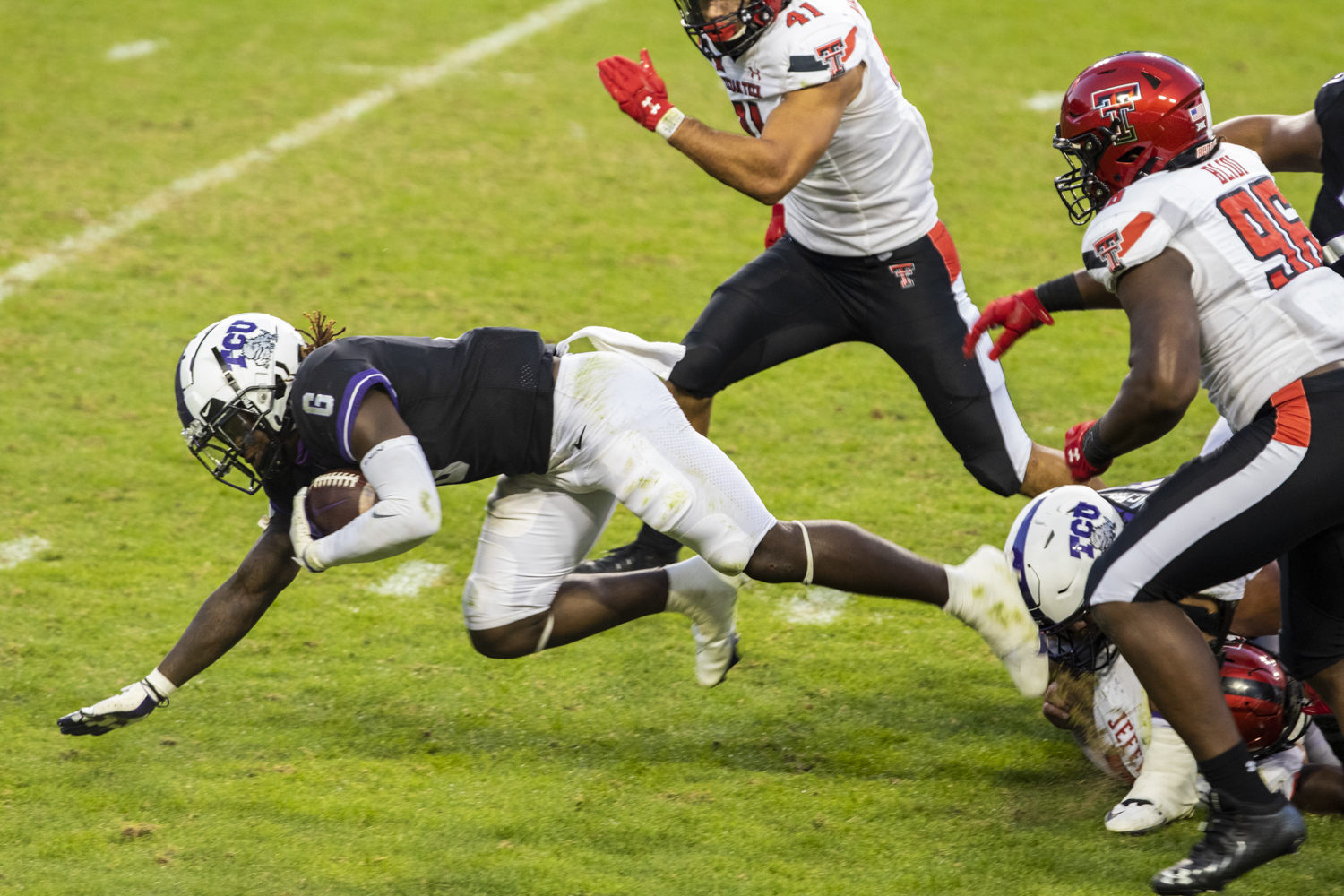 TCU running back Zach Evans (6) stretches for extra yardage on a carry against Texas Tech during the 2020 season. (Heesoo Yang/Staff Photographer)

TCU kicks off the season at 7 pm this Saturday at home against Duquesne University.