“Let our game talk”: TCU football heading into 2021 with a chip on its shoulder 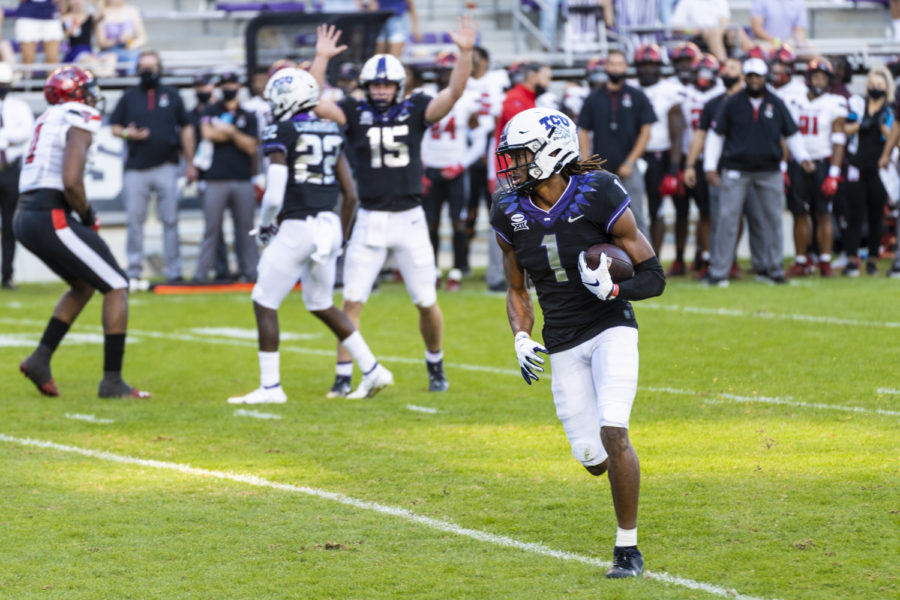 Just another motivational phrase to some, those three words have become the backbone of what TCU football is trying to accomplish this fall.

As if seeing their bowl game get canceled last December due to COVID-19 protocols was not enough, the Frogs have gotten plenty of things to make personal over the last few months courtesy of the national media.

In early July, TCU was ranked fifth in the Big 12 preseason poll, falling behind teams like Texas and Oklahoma State of which the Frogs have defeated in three of their last four matchups.

Just a few weeks later, the Big 12 was featured on the headlines of every major college football media outlet when the “jocks” of the conference, Oklahoma and Texas, announced their intention to depart for the Southeastern Conference (SEC).

Instead of getting caught up in the hype of the top dogs deciding to pursue greener grass, TCU is choosing to “Make it personal” and take care of what they can control.

“I don’t think any of us really care what these other guys [Oklahoma and Texas] have,” tight end Carter Ware said. “We know what we have. We’re going to play our game, and we’re going to do our thing. By the end of the year, we’ll let our game talk.”

Approval from the media has never been something a Gary Patterson-led squad has needed to succeed, which is why those around the program say that TCU is more unified than ever heading into their 2021 campaign.

Patterson compared the chemistry of this team to the 2011 squad that famously defeated Wisconsin in the Rose Bowl, while Ware felt that it was reminiscent of the 2017 team that made a Big 12 championship appearance.

“If I had to compare it to since I’ve been here, maybe a little bit like 2017,” Ware said. “That was my freshman year, and I got to travel the last couple of games with those guys and see how much they really bonded with each other.”

It comes as no surprise that the Frogs work well together, as they are returning 16 starters in 2021, highlighted by third-year quarterback Max Duggan.

When talking about leadership with Patterson and members of the team, Duggan’s name is always one of the first to come up.

“Max is our guy. He’s solid as a rock,” Ware said. “We go with Max. His highs are our highs, and his lows are our lows. He carries us, and we carry him. Back against the wall, we will fight with that guy to the end.”

“We go with Max. His highs are our highs, and his lows are our lows. He carries us, and we carry him. Back against the wall, we will fight with that guy to the end.”

Despite struggling with a heart condition over the offseason, Duggan made strides in 2020, improving his completion percentage by over seven percent and cutting his interception total by more than half.

Now that the junior is entering his third year as a starter following his first full offseason, the country should get a look into the true potential of Max Duggan as a Power 5 signal-caller.

Duggan is not alone in his leadership, though, as Patterson has also highlighted wide receiver Derius Davis as someone else who has stepped up in big ways over the offseason.

“The guy that’s really had a great camp and has fought through things is [Derius] Davis,” Patterson said. “We really need[ed] an older guy on the outside.”

Davis did a little bit of everything for the Frogs in 2020, collecting 492 all-purpose yards and three touchdowns, two of which came on punt returns.

Named to the watchlist for the Paul Hornung Award (nation’s most versatile player) over the offseason, the senior’s utility nature and leadership of budding receivers like sophomore Quentin Johnston should make him a pivotal piece of the TCU offense in 2021.

Before they face the gauntlet of nine-straight Big 12 games without a bye week, the Frogs see a trio of non-conference games that increase in difficulty as they go without posing too serious of a threat for a loss.

This Saturday, TCU kicks their season off against FCS-opponent Duquesne for the first-ever matchup between the two opponents.

The game will be the first full-capacity contest for the Frogs at Amon G. Carter Stadium since November 29, 2019.

Despite being a lower-tier opponent, the Dukes represent some of the best that the FCS has to offer behind the experience and a strong offense.

Because the FCS season was delayed due to the COVID-19 pandemic, Duquesne played organized football just a few months ago, and they are returning all 22 starters from a team that went 4-0 in their regular season.

“If there’s an advantage for them, it is that they played just a couple of months ago,” Patterson said. “They’ve been going [and] doing, so that’s a positive.”

Leading the Dukes is quarterback Joe Mischler, who was named to the watchlist for the CFPA FCS National Performer of the Year Trophy last month.

After transferring from Ohio, Mischler put together a First-Team All-NEC season this spring, hinting that he should give the TCU secondary an excellent warmup for their FBS opponents to come.

From there, the Frogs will continue their home stretch with a matchup against California before taking their one mid-schedule bye the following weekend.

Finally, a chance to avenge their heartbreaking loss to SMU two years ago comes for TCU, as they take on the Mustangs at home to end their non-conference slate on Sept. 25.

“We knew going into this ball game that it was how do you find a way to win against Duquesne and Cal?” Patterson said. “Then, you get two weeks to get ready for SMU, so we’re still pretty much on that timeline.”

Despite Patterson giving the label “pretty good” for an overall evaluation of fall camp, the Frogs do have their fair share of injuries preventing them from being in full stride going into the opener.

The most concerning of these undoubtedly come on the defensive side, as cornerback Noah Daniels and defensive end Khari Coleman, both of which were slated to be key pieces for the TCU defense in 2021, are out for the season opener.

Patterson has spoken well of both Ceasar and Horton over the offseason, which should give the Frogs insurance through the unknown of when their stars can return.

At linebacker, sophomore Jamoi Hodge has been struggling with injury, meaning that junior Wyatt Harris will start alongside junior Dee Winters as the Frogs face the tough task of filling now-Houston Texan Garrett Wallow’s role.

On the line, senior Terrell Cooper, who is primed for a career year, is “just about back” after struggling with injury throughout fall camp.

Throughout his media availability on Tuesday, Patterson continued to emphasize the word “depth,” and it’s exactly that which will go on to determine the fate of TCU’s season.

The Frogs kick off their season this Saturday against Duquesne at 7 p.m. on ESPN+.