No. 6 TCU secures a road win against No. 20 Pittsburgh 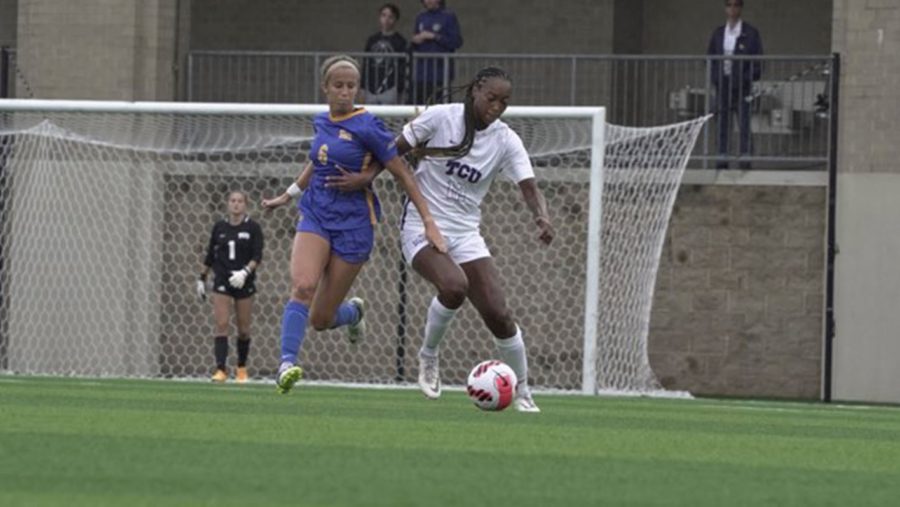 No. 6 TCU holds No. 20 Pittsburgh scoreless, winning 1-0 with credit to Michelle Slater's (12) game-winning goal in the second half Sunday morning. Photo courtesy of Go Frogs.

Junior Michelle Slater scored her first goal of the season and her first career game-winning goal as TCU picked up a 1-0 win at the University of Pittsburgh on Sunday morning.

Goalkeeper Lauren Kellett also came up big for TCU, recording her third-straight shut out with a career-high four saves.

“Today was good, shutouts are always good,” TCU head coach Eric Bell said. “She [Kellett] got a lot of action, but not a lot of dangerous chances.”

The first half was evenly matched, as both the Horned Frogs and the Pittsburgh Panthers had a total of eight shots on goal. Freshman Camryn Lancaster saved a goal in the 31st minute, which helped keep the game a scoreless match.

TCU came out offensively determined in the second half. Wasting little time, midfielder Olivia Hasler made a solid defensive play to win back possession and then found forward Grace Collins, who initiated the attack on goal.

At the top of 18, Collins found Slater, who curled a shot into the upper corner of the goal. The score gave the Horned Frogs a 1-0 lead just 57 seconds into the second half.

The play granted Collins her third assist of the season and the 13th of her career.

“I think we did a better job defensively in the second half, we didn’t allow them to play a lot in their end,” Bell said. “The goal allowed us to be out on our front foot, and I really think the early goal deflated them.”

Overall, TCU dominated the second half, forcing the Panther goalkeeper to make four quality saves to keep it a 1-0 game.

In the final five minutes of the match, defenders Brenna Brosam and Jenna Winebrenner each blocked several shots, and Kellett made a final save to secure the shutout.

“Winning on the road in this environment and on turf is hard,” Bell said. “I’m very happy with our group.”

The Horned Frogs will take on the University of Alabama Crimson Tide on Thursday night in Tuscaloosa, Alabama. Kickoff is set for 6 p.m., and the game will be televised on the SEC Network.