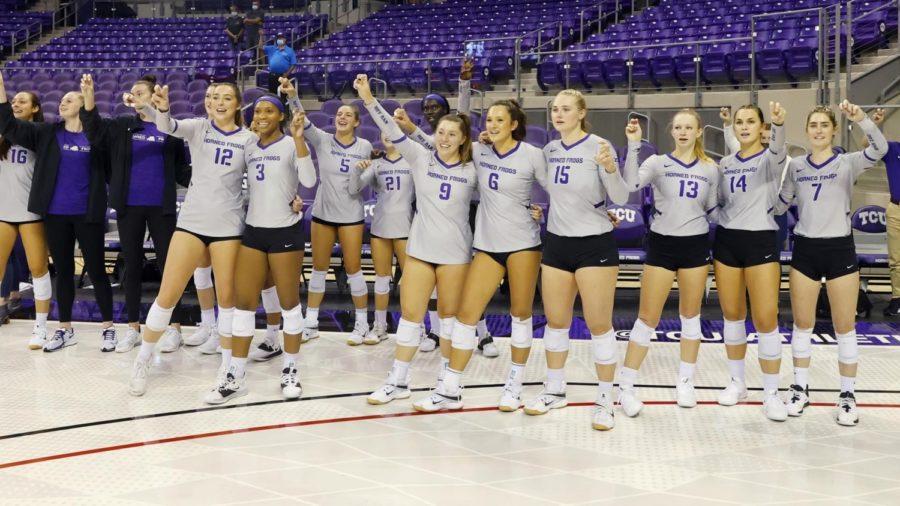 TCU celebrates their victory over UMBC to give them the Cowtown Class title on Sept. 3, 2021. (Photo courtesy of gofrogs.com)

After dropping their first two games of the season, TCU volleyball bounced back with three straight wins to capture the Cowtown Classic title at Schollmaier Arena on Friday.

The Frogs did not drop a single set throughout the tournament, and this was the first time the team has swept three straight opponents since 2018.

Setter McKenzie Nichols was named tournament MVP after averaging 10.33 assists per set, 2.22 digs per set and 1.33 blocks per set.

“Coming in from last weekend, I think our team was really well prepared. We came in with high energy, high intensity and played together as a team,” said Nichols. “Everyone wanted to win, play hard and play for each other.”

In TCU’s first game on Thursday, the Frogs faced Nicholls State, and outside hitter Julia Adams and middle blocker MyKayla Myers carried the Horned Frogs to a sweep over the Colonels.

“My mentality was to stick together with my team,” said Adams. “I wanted to do all the little things, feed off the energy from the fans, get things done and play our game.”

Myers was a force at the net in the contest, matching her career high with seven blocks. The Frogs had 13 blocks as a team, their most in a three-set game since 2015.

After falling to top 10 opponents Wisconsin and Minnesota in their season-opening weekend, the Frogs used a 10-point run in the third set to earn their first victory of the season in dominant fashion.

Adams finished with 12 kills, and Nichols tallied 30 assists and 10 digs.

“We’re defending our home court,” Adams said. “We’re building together as a team and we’re growing.”

TCU continued to cruise on Thursday, winning all three matches against the University of Texas Rio Grande Valley to move to 2-0 in the tournament.

“I’ve been working really hard over the summer,” said Myers. “I’ve worked really hard and I want to be the best for my teammates. They push me every single day in practice to be better, and it really showed today.”

After the wins on Thursday, coach Jill Kramer said she hoped the momentum would carry over to the final match.

The Frogs faced off against the University of Maryland, Baltimore County in their third and final match of the Cowtown Classic with a chance to take home the crown.

TCU took care of business yet again, riding 16 kills from Adams, 31 assists from Nichols and seven blocks from middle blocker Madilyn Cole to a sweep of UMBC.

Cole played a large part in a staunch defensive effort by the Frogs, as they held the Retrievers to just a 0.089 hitting clip as a team.

“We were able to get a lot of our points from serving and continually executing our defense well throughout all sets of this match,” Kramer said.

The Frogs hope to carry this momentum into next week’s tournament, Fight at the Fort, which will also be held at Schollmaier Arena.

The first match of the tournament will be TCU against Louisiana Tech on Sept. 9 at 12 p.m.