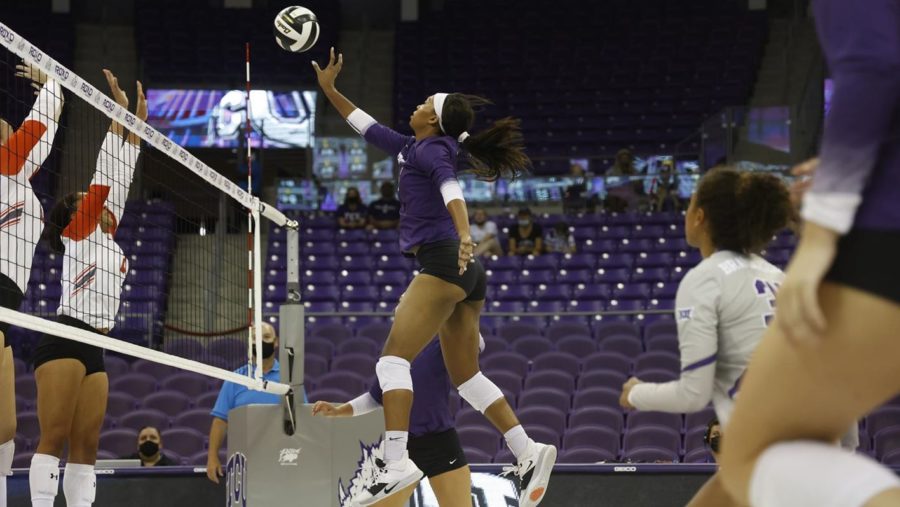 TCU volleyball won their fourth-straight match in a sweep against Louisiana Tech on Sept. 9, 2021. (Photo courtesy of gofrogs.com)

Behind an explosive offensive performance, TCU volleyball secured their fourth-straight sweep on Thursday with a win over Louisiana Tech University to start off the Fight in the Fort Tournament.

The win was the 150th of TCU head coach Jill Kramer’s career, who was the head coach at West Virginia University from 2010 until she was hired to take over the Horned Frogs in late 2014.

“I think she [Kramer] means a lot, especially because she is an alumni,” middle blocker Afedo Manyang said. “She has put a lot of time and effort to build this program and to put everything into us. Turning that into wins, and to keep it going means a lot to us.”

Despite the impressive accomplishment, Kramer gave all the credit to the players that she has coached throughout her career.

“I don’t really think of it that much. I think of all the hard work that every player that I’ve ever coached has put into the game,” Kramer said. “It’s them. It’s not something I’m doing, it’s something they do. I’m happy to be along on the ride with them.”

Outside hitter Taylor Raiola (12 kills) and Manyang (10 kills) led the way for a Frog offensive attack that finished with 45 kills and an impressive .299 hitting percentage.

In the opening set, the Frogs went on an early 4-0 run, giving them momentum.

Still, the Louisiana Tech Bulldogs stayed within striking distance the entire time amid another 3-0 run by TCU later in the set. The Bulldogs would give a final push at contesting the set but failed to catch the Frogs, who won the set 25-20.

“I think we stay focused on the next point and the next play,” Kramer said on how TCU kept the momentum. “You have short memory, and you continue to move forward.”

Raiola had racked up seven kills at this point, setting the tone for a near-flawless TCU offense that had a .536 hitting percentage in the opening set.

In the second set, the two teams traded points early, but Manyang gave her team a quick boost by racking up three kills in TCU’s first nine points.

Throughout the set, the Frogs held themselves in check, giving up points due to several violations and 10 attacking errors.

“We made a few hitting errors,” Kramer said. “We needed to come out of that and bounce back into it in the third set.”

These errors allowed the Bulldogs to pull as close as two near the midway point of the set, but cleaner play from there allowed the Frogs to cruise to a 25-19 victory.

“Our team stayed locked in and stayed focused on the right things,” Kramer said. “At the end of the day, they got it done.”

Outside hitter Julia Adams stepped up big in the third set, leading the team on an early 3-0 run. This fast offensive start would go on to overwhelm Louisiana Tech, as Raiola would go on to deliver the final blow of a 25-13 victory and match sweep.

Adams finished the contest with nine kills of her own.

“The outside is very important to us,” said Manyang. “They’ve been very consistent throughout this season so far. We can always count on them to make a play and put the ball away for us.”

TCU will attempt to tie the school record of sweeps-in-a-row when they face the University of North Florida at 7 p.m. Thursday at Schollmaier Arena.