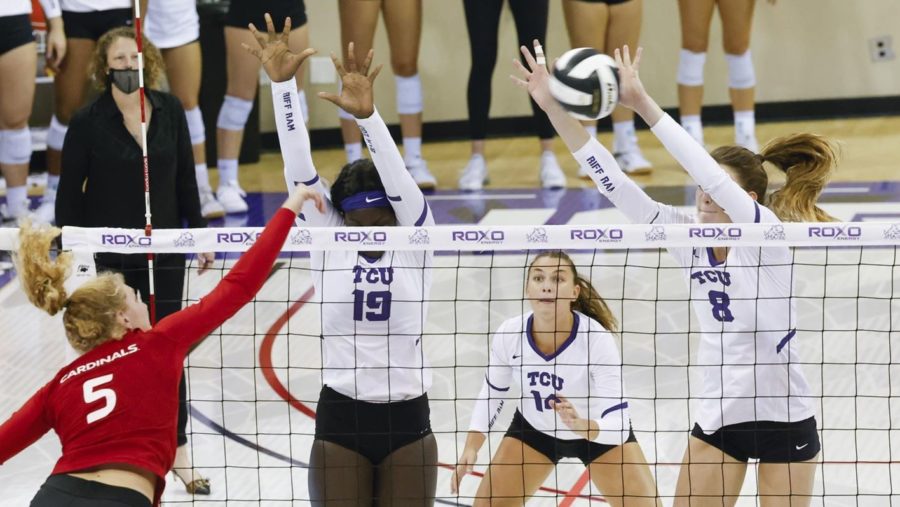 TCU recorded 22 blocks against Incarnate Word on Tuesday, which is more than any Division 1 team so far in 2021. (Photo courtesy of gofrogs.com)

With the help of a lockdown defensive performance, TCU volleyball bounced back from a tough loss to HBU last Friday with a 3-1 win over Incarnate Word on Tuesday at Schollmaier Arena.

The Frogs physically dominated the Cardinals, setting multiple records at the net. With 22 total blocks, TCU recorded the highest number of blocks per set (4.5) in school history, falling one block short of tying their record for most blocks in a match (23).

TCU tallied the most blocks by any Division 1 team this season and the most in a four-set match since Nov. 26, 2019.

Middle blocker Madilyn Cole led the Horned Frog block party, tying the team record of most blocks by an individual player in a single game (12). MyKayla Myers, also a middle blocker, racked up 10 blocks herself, a career-high. This is the second time in program history that TCU had two players with double-digit blocks.

Cole and Myers were not alone, though, as setter McKenzie Nichols also set a career-high with nine blocks to go with her 30 assists and seven digs.

Meyers was also an efficient force offensively in the contest, acquiring 13 kills on only 17 swings on her way to recording her first career double-double.

In the opening set, the Frogs started off strong with an early 3-0 run. The Cardinals quickly retaliated, but the Frogs pulled away in the middle of the set with another run, this one 7-0. Defensive specialist Bella Swafford and libero Cecily Bramschreiber combined for seven digs to set the foundation for a defensive masterclass that held the Cardinals to a 0.00 hitting clip in the set.

Defensive specialist Dani Dennison helped finish off the set with two consecutive aces to give TCU the 25-12 victory. Outside hitter Raiola Taylor, who had five kills in the set, led the charge offensively at the net.

In the following set, sloppy blocking and attacking errors for TCU gave Incarnate Word an early advantage. Nichols and Meyers soon led an 11-point run, though, swinging the momentum in favor of the Frogs. Outside hitter Julia Adams, who finished the set with four kills, led the Frogs offensively. The Cardinals missed six serves, which limited their chances of making the set more competitive and helped give TCU a 2-0 match lead.

Taylor continued her dominant performance in the third set, acquiring four total kills. Her performance was not enough to lead the Frogs to a sweep, though, as the Cardinals won the set 25-23. Multiple attack errors held TCU back, preventing them from achieving the sweep.

That didn’t take any energy from TCU, though, as it dominated the fourth set to end the match. Cole led the Frogs in the final set with six blocks. Bramschreiber made two spectacular diving saves, leading to two TCU kills. A record-breaking block by Myers propelled the Frogs to a 25-15 victory and their sixth overall win of the year.

The team gained energy from the student section, which was the largest it had been all season.

“I want to thank our fans for coming out, the students were great tonight,” head coach Jill Kramer said. “That was our largest crowd of the year and we’re super appreciative to the student section for sticking around with us.”

TCU will look to continue its defensive dominance against SMU on Saturday, Sept. 18 at 2 p.m. in Schollmaier Arena.