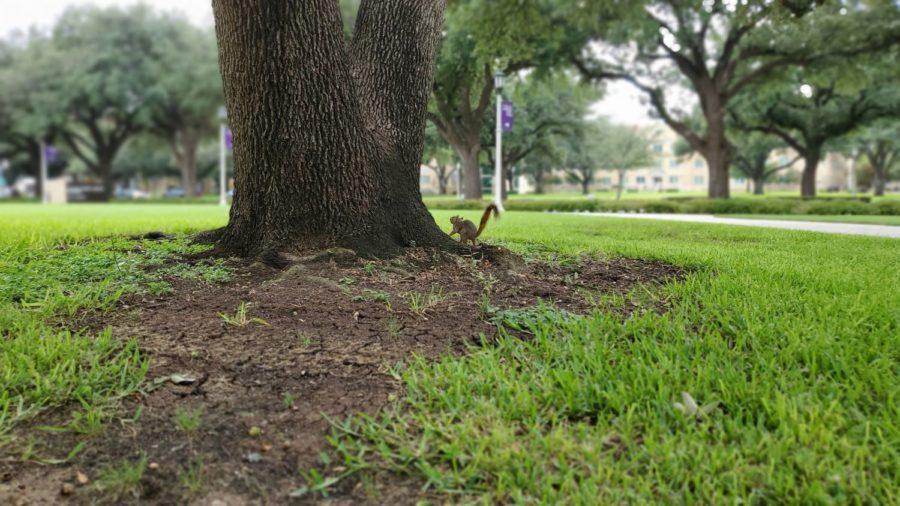 Members of the TCU community have recorded more than 600 plant and animal species on campus as part of a global citizen science effort to document wildlife sightings.

Adjunct professor and Fort Worth Nature Center & Refuge director Rob Denkhaus founded the TCU Wildlife Project on the iNaturalist platform in 2014 so students in his urban wildlife class could identify campus wildlife.

Denkhaus said he was skeptical when he first heard about iNaturalist, which was founded in 2008.

“I was not 100% on board initially by any means,” said Denkhaus, who added that previous citizen science projects failed to produce quality data.

However, iNaturalist has since grown into one of the most respected and widely used citizen science platforms.

Its 1.8 million users have recorded more than 80 million observations, with more than half classified as “Research grade,” or verified by the iNaturalist community.

Denkhaus said he chose to incorporate iNaturalist as a group project for students in his class as he saw experts across a range of wildlife-related fields embrace the new tool.

“My goal is to make these little things around campus relevant to the average student and it takes advantage of a piece of technology that every student carries in their hand or their pocket,” he said.

Today, 177 observers have recorded more than 4,400 observations for the TCU Wildlife Project.

Students have documented species including fox squirrels, green anoles and the gray foxes that captivate the TCU community on social media.

Anyone visiting the campus can contribute observations, but the project has been dominated by students in Denkhaus’s urban wildlife class.

Beyond the facts and figures, though, iNaturalist leaves a lasting impression on its student users and the surrounding community.

Now, “I’ve gotten addicted to it!” she said. “We see these animals and insects every day, but we have no idea what they are, and it’s a little bit interesting to just kind of have a little bit more perspective as to what you’re seeing every day.”

Serrano has catalogued more than 160 observations since last year, many of them off-campus.

“I go to Yosemite, I went recently, and then I love using it at my house too because there’s a lot of different bugs,” she said.

Denkhaus takes pride in former students who continue to use iNaturalist to document their experiences in nature.

“One of the biggest reasons that I include it as a part of the class project is because I have a number of folks that are involved in the class, students, who aren’t necessarily environmental science or biology [majors],” he said. “This gives them a potentially lifelong connection to the class if they embrace it.”

Sam Kieschnick, urban wildlife biologist for Texas Parks & Wildlife, said the power of iNaturalist comes from its ability to engage both amateur and professional naturalists.

As a biologist, Kieschnick examines the data gathered by citizens and scientists alike for documentation of invasive species and wildlife population trends due to climate change or seasonal shifts.

However, “The biggest thing that I use it as an urban wildlife biologist is the constituency,” he said.

Kieschnick uses the data to show city council members, land managers and park board staff how DFW residents use and value urban biodiversity.

“I use it to show that yes, there is nature here, but arguably just as important, there are people who care about nature,” he said.

Kieschnick explained iNaturalist connects people to nature by teaching them about the different species that call the urban environment home.

“The new person sitting next to you, when you learn his or her name, that’s when that relationship starts,” he said. “I bring that up when I talk about iNaturalist [because] your relationship with nature begins with learning the names of the different things that are around you.”

At TCU, Denkhaus hopes to develop field guides describing the different species on campus that could introduce students outside the class to local wildlife and ultimately usher in positive changes in campus sustainability policy.

“I know for a fact that if people know what they’re looking at, they will value it more than if they’re like ‘Oh, it’s a bird,’” he said. “It allows much greater emphasis to be placed on the management of those species.”

Kieschnick encourages students who are interested to join iNaturalist and learn more about the species that live on campus.

Students can create a free account at inaturalist.org or by downloading the smartphone app.