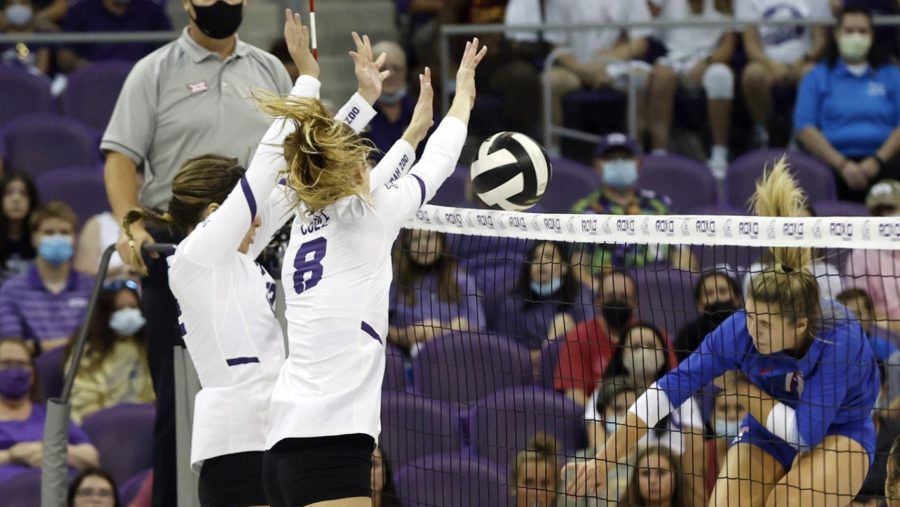 After winning just four matches in the extended 2020-2021 season, TCU volleyball is 6-4 headed into conference play in 2021 (fall season). (Photo courtesy of gofrogs.com)

After a disappointing 2020 season in which TCU volleyball won just three conference matches and finished last in the conference standings, the team is looking to be more competitive in Big 12 play this year.

After the end of their non-conference season, TCU sits at 6-4.

Despite dropping a nail-biter to SMU last Saturday in five sets, the Frogs have looked much sharper than a year ago through their first 10 contests.

Ahead of TCU’s first conference matchup, here is a look at how TCU and some of the Big 12 powerhouses have fared heading into the season:

The top dog of the conference so far is No. 1 Texas, who finished nonconference play undefeated and is ranked first in the American Volleyball Coaches Association (AVCA). In 2020, the Longhorns finished as the runner-ups in the national championship to Kentucky. Outsider hitter Logan Eggleston, the reigning Big 12 player of the year, returned to the Longhorn offense for another season, alongside four other All-Americans who are looking to make another championship run.

Right behind the Longhorns is No. 10 Baylor, who is currently ranked tenth in the AVCA. Outside hitter Yossiana Pressley, AVCA All-American first team member, leads the Bears offense with 4.42 kills per set (1st in the Big 12).

Even in a powerful conference, the Frogs are set up to compete through their stellar defense. They average 3.17 blocks per set, which puts them at fifth in the nation. Junior middle blockers MyKayla Meyers and Madilyn Cole both average 1.51 blocks per set and are tied for first on the Big 12 blocking leaderboards. Setter junior McKenzie Nichols is thriving, dropping dimes (9.5 assists per set) but also helping out on defense. The junior is the only setter in Division 1 volleyball to average more than one block per set (1.06).

Defensive specialist Danni Dennison looks to lead the Horned Frog back row. Now in her fifth year, Dennison has proven to be an unwavering defensive presence, racking up 1,389 digs. She is 45 digs away from surpassing Calli Corley as the program leader.

Libero Cecily Bramschreiber, a freshman standout, has been stellar for the Frogs so far this season, with 3.46 digs per set. Cecily ranks seventh in the Big 12 digs leaderboards and two spots ahead of her sister, Shanel Bramschreiber, who is a senior at Baylor.

One question will soon be answered through the upcoming conference play: Will TCU be able to sustain their daunting defense against higher-end opponents? If so, the Frogs are likely to achieve the greatest defensive season in program history and be competitive in the conference. If not, they will struggle, given their hitting percentage and kills per set numbers, which are far below the Big 12 average.

Consistency will be a key for the squad, who have shown flashes of offensive explosions throughout the non-conference play. The Frogs’ front line is led by outside hitters Julia Adams and Raiola Taylor, with Nichols setting the tempo as the playmaker. Adams leads the team with 3.2 kills per set. Meyers leads the frontline in hitting efficiency with a .378 hitting percentage. Junior outside hitters Afedo Manyang and Audrey Nalls have shown great promise, each accumulating above 2.0 kills per set. They have, however, been the least efficient of the Horned Frog hitters, with both of them holding hitting percentages below .155.

The powerhouse matchups are still down the road for TCU volleyball but their first matchup against the 8-3 Cyclones will surely be a good early-season test for the Frogs.

The Iowa State offense is stellar, acquiring over 60 kills in three different matches this season. They rank second in the Big 12 with an average of 13.66 kills per set. Outside hitter Eleanor Holthaus leads the Iowa State attack with 3.29 kills per set, while setter Jaden Newsome ranks third in assists per set in the conference with 10.13.

TCU takes on Iowa State tonight at 6 p.m. on ESPN+.