Not backing down: Carter determined to lead TCU football back to form defensively 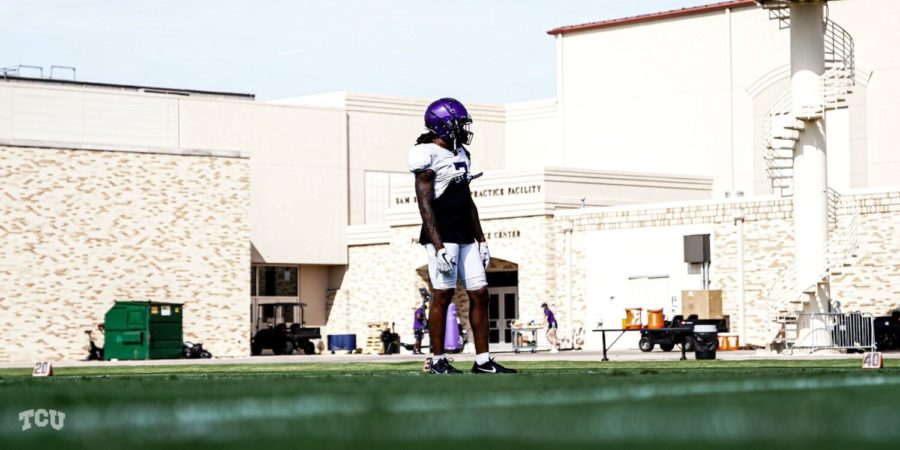 Memphis transfer T.J. Carter (7) wants to help TCU get their mojo back as Big 12 play begins this Saturday. (Photo courtesy of @TCUFootball's Twitter)

TCU fans are used to seeing a player with the number “7” on his back darting all over the field and making plays on defense.

Over the last two seasons, safety Trevon Moehrig, who wore the number for his sophomore and junior campaigns, put together one of the greatest safety careers in the history of TCU football.

Now, Moehrig makes plays for the NFL’s Las Vegas Raiders, and a new face wears the number “7,” though many at Amon G. Carter Stadium may not even know his name.

Memphis transfer T.J. Carter now rocks the same threads in which Moehrig once dominated, and the seasoned safety is determined to help the TCU defense bounce back from one of their worst performances in recent history.

“Short memory,” Carter said of his message to younger guys after the SMU loss. “I was already thinking about Texas right after the game. We lost? So what? Next game.”

The Frogs gave up 350 rushing yards to SMU (6.7 yards per carry), which was the most they had conceded since the Jalen Hurts-led Oklahoma Sooners rushed for 366 yards in their 2019 matchup.

To make matters worse, TCU missed 20 total tackles as a team in the contest, with Carter leading the team with four missed tackles of his own.

To put it simply: Carter and TCU got out-worked by SMU on their own field last Saturday.

When talking to the media on Tuesday, though, Carter said there’s more to TCU’s struggles than meet the eye, as the Frogs had several defenders in new positions or playing serious minutes for the first time on Saturday.

This, Carter noted, led to the several miscommunications that were noticeable amidst members of TCU’s secondary from the opening moments of the Battle for the Iron Skillet.

Carter himself was one of those players in a new spot, as head coach Gary Patterson moved him from free safety to cornerback the week before the matchup with their cross town rivals.

Carter said that miscues like that will be rooted out from the Frogs’ defensive showing through increased repetitions and chemistry.

Besides the miscommunication with Winters and the missed tackles, Carter was actually one of the few defenders who showed signs of excellence on Saturday, recording six tackles and giving up zero catches in coverage.

Over the course of the game, the graduate transfer had played in three positions (cornerback, free safety, weak safety), desperately trying to hold together a TCU defense that struggled to find any consistency against the Mustangs.

“When we moved him [Carter] to corner, he did a great job,” Patterson said. “Then we lost two safeties and then a third safety.”

Similar to the weight of wearing a former TCU legend’s number, though Carter is not phased by the daunting task of being asked to carry a heavy load.

“I like a challenge. It was really more fun than anything,” Carter said. “Some guys went down, so I had to step up and just move around.”

Carter’s ability to move positions the week of a game comes at no surprise, as he was a four-year starter at cornerback for the Memphis Tigers before transferring to TCU in January.

Over his 46 games played for the Tigers, Carter amassed 187 tackles, 40 pass defenses, seven interceptions (including a pick six) and three forced fumbles.

One of the great defenders in Memphis history, Carter was also a leader off the field, appearing on the AAC All-Academic Team, Dean’s List and Tiger 3.0 club during the 2017-2018 school year.

When asked why he chose to spend his COVID-19 year at TCU, Carter said, “Coach Patterson,” describing the 21st-year had coach as a “hall of fame coach.”

Though Carter admitted that moving to safety when he came to TCU was a challenge, he said that the versatility that he has shown between the two positions is beneficial both for the Horned Frogs and his future NFL career.

“Showing versatility is always good for scouts at the next level,” Carter said. “Whatever I can do to help my team be successful, that’s what I’m here for.”

Three games into the 2021 season, Carter has shown flashes of what made him a standout at Memphis, recording 13 tackles (second on team behind Winters) and giving up zero catches in coverage.

“I’m still learning, of course. It’s a tough defense,” Carter said. “Coach Patterson’s defense is a tough defense; but I’m enjoying the process, and that’s all that matters.”

As TCU tries to bounce back from an embarrassing loss to one rival, Carter and the Frogs have an even bigger test coming to town this weekend in the Texas Longhorns.

Despite their week two loss to Arkansas, the Longhorns look as sharp as anyone in the Big 12 right now following a monstrous 70-35 win over Texas Tech last Saturday.

With the narrative being that TCU “owns” Texas (7-2 since TCU joined the Big 12), Carter is simply worried about the Frogs learning from their week 3 failures and getting back in the win column.

“They look at it like a big rivalry,” Carter said. “TCU won the last couple of years, but to me, it’s just the next game, getting ready for the next game and making sure we come out on top.”

Regardless of their opponent, Carter has goals for the Horned Frogs this season that remain intact, and he plans to do whatever he can on the field to get TCU their defensive mojo back.

TCU takes on Texas this Saturday at 11 a.m. at Amon G. Carter Stadium, and the game will be televised on ABC.