Holding down the Fort: Tomlinson leaving his own legacy in footsteps of his legendary uncle 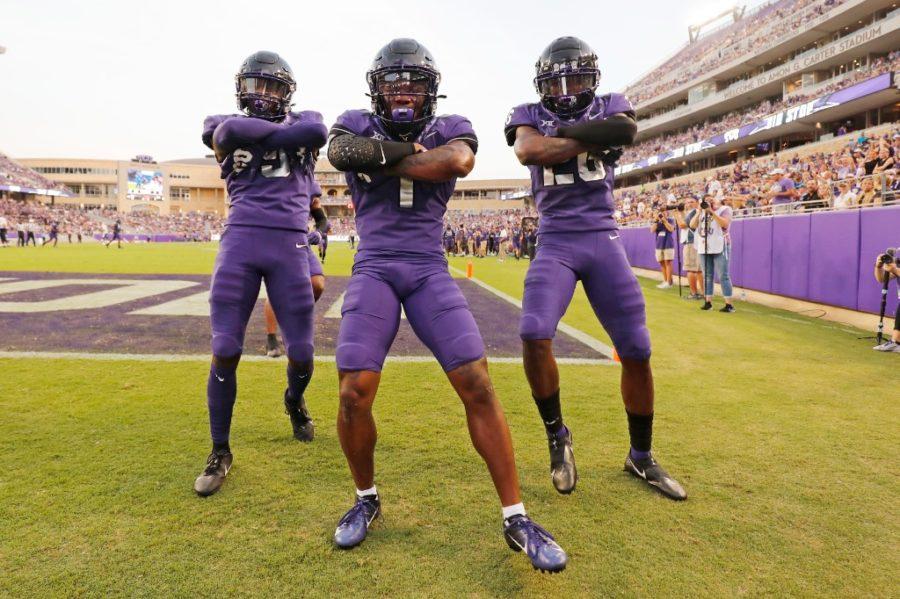 TCU cornerback Tre'Vius Hodges-Tomlinson (1) celebrates with his teammates after his interception during TCU's 45-3 win over Duquesne on Sept. 4, 2021. (Photo courtesy of gofrogs.com)

Besides the names of the three men that have statues on TCU’s campus — Davey O’Brien, Dutch Meyer and Gary Patterson — no name holds more weight in the history of TCU football than Tomlinson.

NFL Hall of Famer LaDainian Tomlinson, who most consider to be the greatest player in TCU history, rushed for a school record of 5,263 yards while wearing the purple and white from 1997-2000.

Two decades later, a Tomlinson is back in a Horned Frog uniform, and though he plays a different position than his legendary uncle, his desire to help TCU win at all costs rings just as true.

Tre’Vius Hodges-Tomlinson knew that wearing “Tomlinson” on his back in Fort Worth would instantly put him in a massive shadow.

Challenges have never been something Tomlinson fears, though, and that has perhaps never been displayed more than his willingness in last Saturday’s game against rival Texas to move positions at the drop of a hat.

“The game last week – it was going well. Coach P[atterson] asked me if I wanted to come out and play safety, and I was like ‘Yea man, let’s go,'” Tomlinson said to the media on Tuesday. “Wherever I saw the ball, that’s where I went, and I made the plays whenever I should have.”

Just seven minutes into the first quarter on Saturday, TCU safety T.J. Carter was hit with a questionable targeting penalty and, by rule, ejected from the game.

With safety Deshawn McCuin already out with injury, Patterson put recently-activated cornerback Noah Daniels in at the corner and shifted Tomlinson back to free safety for the first time in his college career.

“I knew that I had to be that extra voice that we needed on defense, and as we go on the sidelines, that’s what I tend to do,” Tomlinson said of his mindset when Carter was ejected. “So, I try to keep everybody going [and] build confidence.”

Despite being just 5’9″, Tomlinson clearly took a page out of former teammate and current Baltimore Raven Ar’Darius Washington’s (5’9″) book, as the junior gelled into the position well and was all over the field making plays.

Though he was not perfect, giving up one catch for 37 yards, Tomlinson was as good as any safety has been for TCU this year, tying for a team-high with nine tackles, preventing completions on the other two times he was targeted and forcing a fumble.

What stands out most from Tomlinson’s performance is something TCU has struggled with as a team so far this season – making tackles. The Frogs have missed 54 tackles, 21 of those coming against the Longhorns. 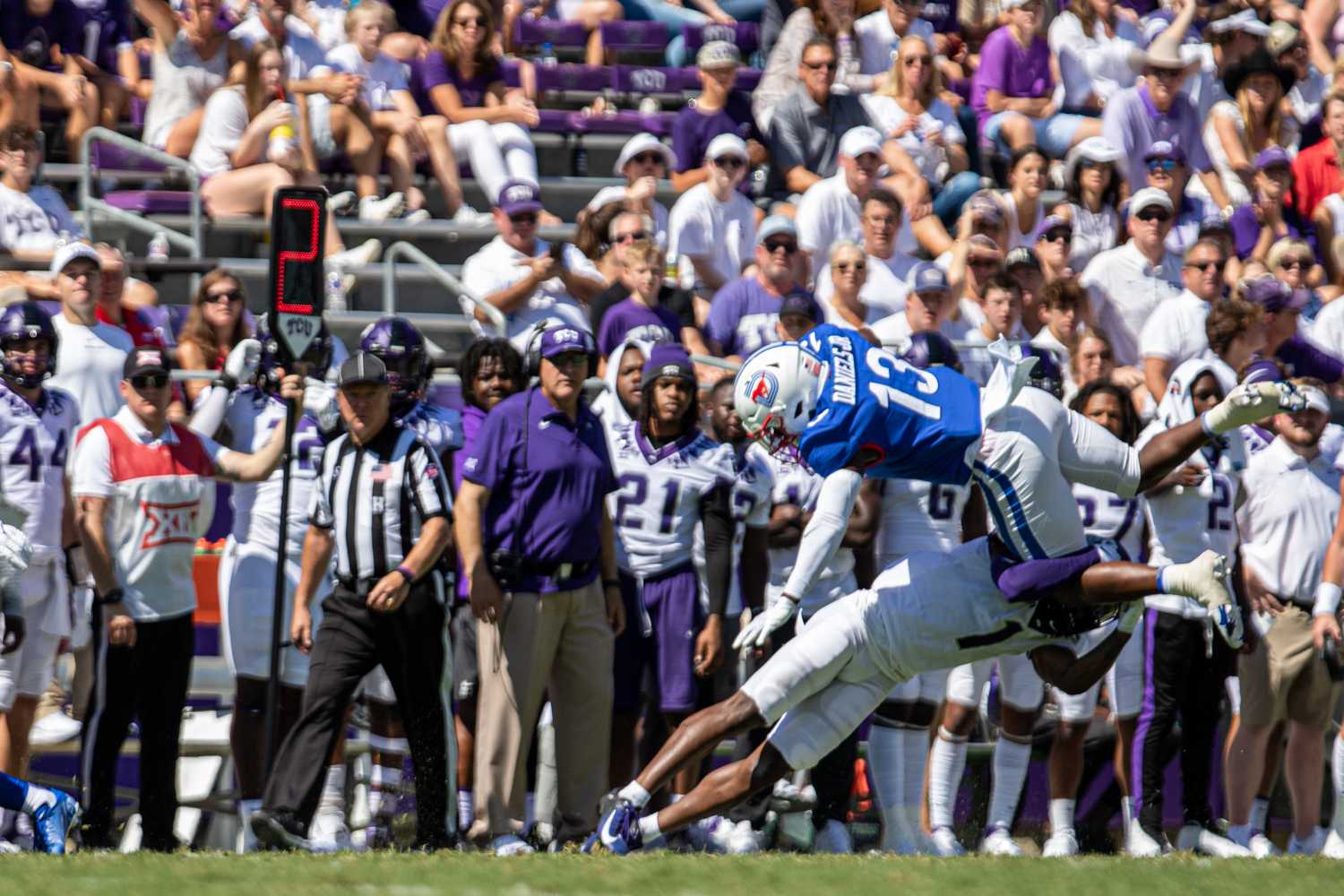 Tomlinson did miss his first two tackles of the season in the game, but that comes as no surprise given his extended time in no man’s land at safety. Still, his ability to consistently make the plays he is supposed to (tied for a team-high 22 tackles on the season), especially in the open field, is a big reason why he is TCU’s most reliable defender.

“I just try to do what’s best for the team. If the guy gets to the second level, I’m like, ‘Man, this is my play. I’m ready to make it,'” Tomlinson said. “It’s not anything that bothers me. I just want to come out and ball and continue to make those plays for my teammates. I just want to play great.”

Always been a “baller”

Despite the fact that Frog fans are used to seeing Tomlinson play corner, safety is anything but new to the Waco native, who played the position at a high level for three years at Midway High School.

A three-star recruit and the No. 15 safety in Texas, Tomlinson was all over the stat sheet while at Midway, totaling 155 tackles, 6 pass breakups and 5 interceptions in his career.

“At Midway, I played safety. I hadn’t played safety in three years,” Tomlinson said. “I’m a baller, so whenever he asked me if I wanted to play safety, I was like, ‘Let’s go. I’m ready to play.'”

Because of his dominance in high school, it’s no surprise that Tomlinson was desired by numerous Power 5 schools, but some did expect him to accept his offer from Baylor given his proximity to the campus.

Following in the footsteps of his uncle, Tomlinson ultimately chose TCU over Baylor, Iowa State, Kansas State and others, citing the energy and grind that the coaching staff in Fort Worth promoted to him as his reason why.

“I knew it was the right decision from day one, whenever I saw how the coaches came out every day at practice,” Tomlinson said. “Coach Mod[kins] continues to push us corners every day–no post, no verse, no catches–and we live by that.” 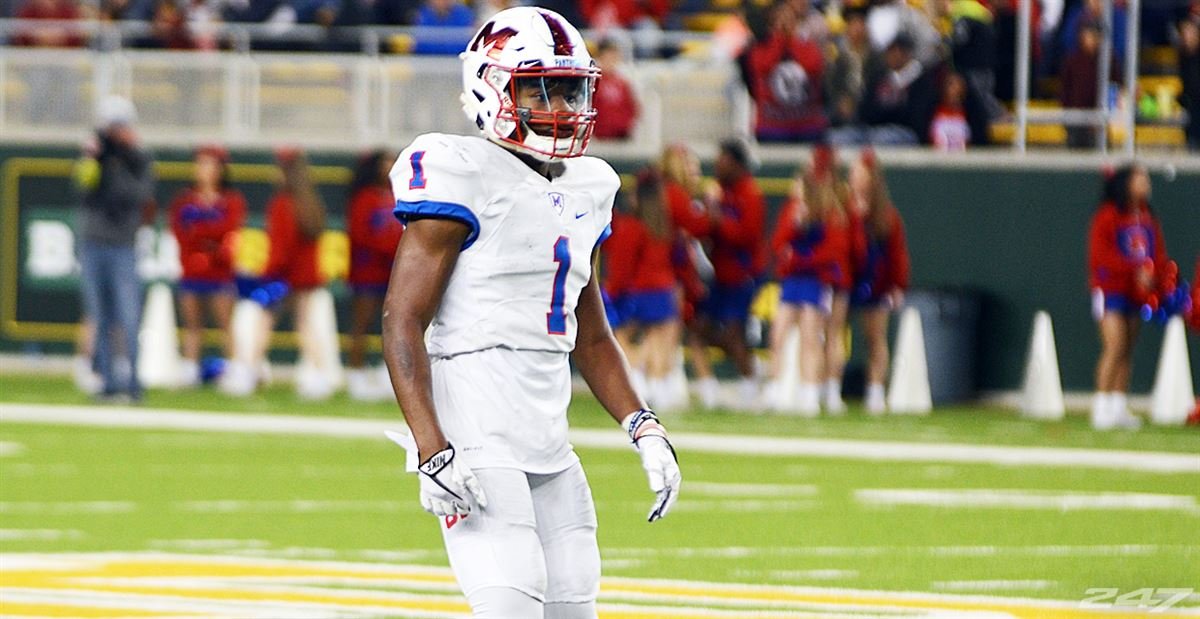 TCU cornerback Tre’Vius Hodges-Tomlinson played three years at safety at Midway High School in Waco, where he was a three-star recruit. (Photo courtesy of 247Sports)

Since then, Tomlinson has shown continued improvement, going from a raw cornerback with unrefined skills to a versatile playmaker and one of the nation’s top defensive backs.

In his first-year campaign, the cornerback got no shortage of playing time, appearing in all 12 games and even starting in a massive matchup against then-undefeated Baylor.

Despite displaying the physical skills to be great, though, Tomlinson had a lot of rough edges as a first-year, struggling to stick with receivers and giving up a catch on 57% of the passes on which he was targeted.

Hard work and continued focus on his craft led Tomlinson to make the necessary improvements, though, and he put together one of the greatest cornerback seasons in TCU history in 2020.

As a sophomore, Tomlinson gave up just 16 catches on the 49 times he was targeted (37% completion) while recording 23 tackles and a Big 12-leading 13 pass breakups (second nationally).

“I love being on an island, and that’s the pass. However, teams want to attack me, come on with it. I’m ready to go,” Tomlinson said.

Given a 90.6 coverage grade by Pro Football Focus (first nationally), Tomlinson was named to the First Team All-Big 12 along with several All-American teams (PFF and AP).

Awarded six preseason accolades over the summer, Tomlinson was expected to be one of the nation’s top cornerbacks yet again in the 2021 season, but a slow start in TCU’s first two games had Frog fans questioning if he had lost his touch.

Though he did snag a “gimme” interception against Duquesne, Tomlinson recorded just one other pass defense in the first two contests of the year, giving up three catches for 98 yards against California.

Following the bye week, though, Tomlinson has been a monster, giving up just two catches (one was a screen that he then proceeded to blow up) and recording 15 tackles in TCU’s last two games.

“I don’t think he [Tomlinson] played well early, but I think last two ball games, he played really well,” Patterson said. “I don’t think he was very happy with himself in the Cal’ and the Duquesne games, and then SMU and Texas, he’s gotten back to playing at the level that he’s used to playing at.”

Patterson seemed unsurprised that Tomlinson had returned to form, and neither did Tomlinson. In one of his few times to talk to the media since he has been on campus, the cornerback oozed with a confidence that did not reflect arrogance but more of a knowledge of how good he and his TCU teammates can be this season.

According to Tomlinson, this mindset of forgetting the past and focusing on the good that the future can bring came from his uncle.

“He [LaDainian Tomlinson] just tells me, ‘Come out every day. It’s another game. Don’t get caught up in the past–any plays that were before that. You live in the future, and keep going. Just know at the end of the day, you’re a baller,'” Tomlinson said.

Tomlinson also takes inspiration from his former teammate, Tre Moehrig, with whom he created an inseparable bond while the two shared a locker room in 2019 and 2020.

The 2020 Jim Thorpe Award winner (nation’s top defensive back), Moehrig now starts at safety for the Las Vegas Raiders, and he recorded his first professional pass defense on Monday night in a primetime matchup with the Los Angeles Chargers.

“I love it, man [Moehrig’s NFL success]. Me and Tre Moehrig, we were tight. We flow, flow like water,” Tomlinson said. “We ended up making our own little block on the field. It was like, what goes down over here, nothing is going down.” 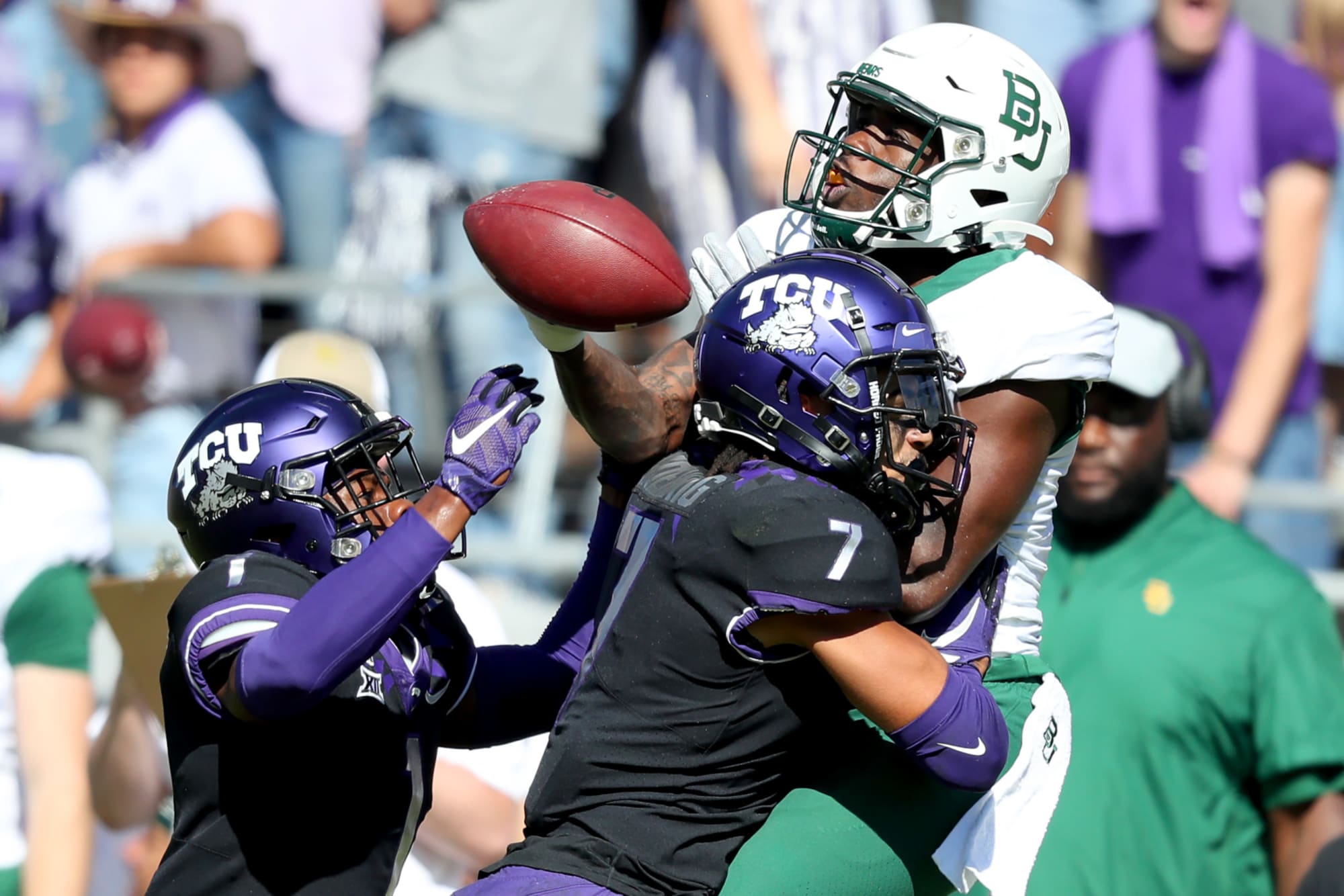 Due to continued injury issues, Daniels missed TCU’s first three games of this season, but his 34 snaps played on Saturday have Tomlinson hoping that their one-two punch in the secondary is still a possibility this year.

“We [Tomlinson and Daniels] were on the verge of becoming the best duo in college, so we’re now ready to do it again,” Tomlinson said. “I’m just waiting.”

With the Frogs’ facing a two-game skid, things do not get any easier for Tomlinson and the TCU secondary going forward.

Over the next two weekends, TCU will head out for their first two road games of the season, and they just so happen to be the top two leaders in passing yards in the Big 12 (Texas Tech and Oklahoma, respectively).

Up first is Texas Tech (4-1), and led offensively by former TCU offensive coordinator Sonny Cumbie, the Red Raiders lead the conference with 294 passing yards per game.

“Texas Tech–they’ve always been a team to throw the ball. They want to go vertical,” Tomlinson said. “That’s what I’ve seen on film so far right now, and we’re ready for it.”

Facing a hostile crowd in Lubbock, it will be important for Tomlinson and the team to truly be ready, as they look to get back on track and avoid their first three-game losing streak since midway through the 2018 season.

While a win against Texas Tech would not convince many Frog fans that TCU can still accomplish something great this season, Tomlinson sees the talent on the Frogs’ roster as enough for the team to still break out.

“There was all the talk of how great of a team we really could be in the beginning of the season,” Tomlinson said. “We have so much more ball to play, and we’re going to show that. We do have a great team, it’s just the little things that we have to continue to work on to become that better team that everyone knows that we can be.”

TCU takes on Texas Tech in Lubbock at 6 p.m. on ESPN.