No. 11 TCU soccer shuts out Oklahoma for second-straight win 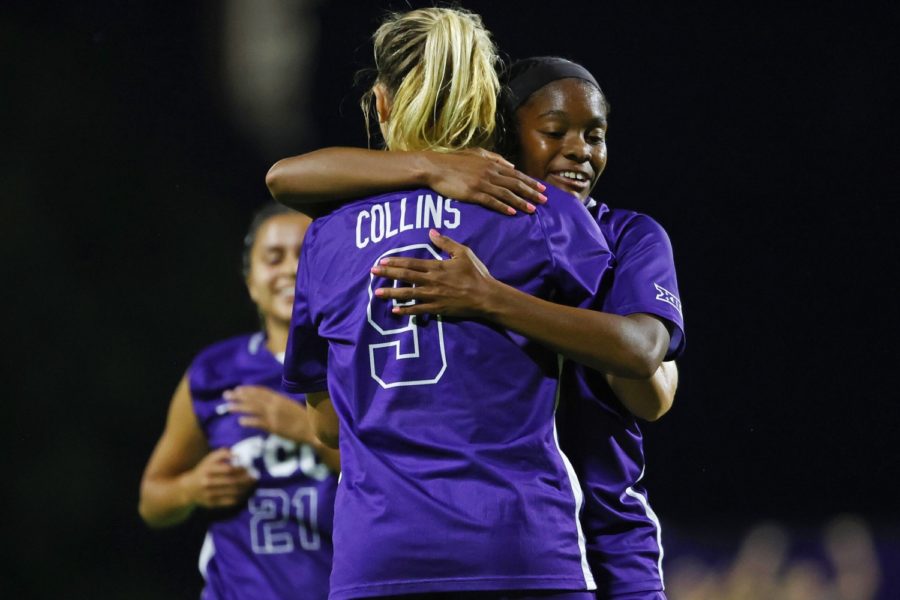 Grace Collins and Chaylyn Hubbard embrace after a goal, putting the Frogs in a 1-0 lead on Oct. 7, 2021. (Photo courtesy: TCU Soccer Twitter)

TCU soccer picked up its second conference shutout of the season after a 2-0 win at home against the Oklahoma Sooners on Thursday night.

“It’s always hard to win college soccer games and, as I told the group, it’s even harder in conference; everybody knows everybody,” head coach Eric Bell said. “So, to come away with a shutout, a 2-0, doing good stuff from an attacking perspective and not giving up any goals, I’m going to sleep well tonight.”

Strikers Grace Collins and Skylar Heinrich each tallied a goal for the Horned Frogs, while goalkeeper Lauren Kellett made four saves, recording her fifth shutout of the season.

TCU spent the majority of the half in the attacking third, with several shots on goal.

In the 33rd minute, midfielder Olivia Hasler found senior Chaylyn Hubbard in open space. Hubbard carried to the top of the 18 before slipping a wide right pass to Collins. Collins’ shot slid right in between the Sooners goalkeeper Nikki Panas and the front post.

That ball had eyes!

Grace Collins powers it past the keeper to give TCU the lead.#GoFrogs pic.twitter.com/Z7uRlvkjfM

After the half, TCU continued to dominate possession, outshooting the Sooners 14-3.

Oklahoma’s only opportunity for the equalizer came in the 60th minute, when first-year defender Sheridan Michel fired a high shot just inside the 18, which Kellett punched out and over the net.

In the final four minutes of the match, the Frogs earned their security goal. Senior Messiah Bright flicked a header to Heinrich, who successfully surpassed goalkeeper Panas and the remaining Sooners defenders to score her first goal in a TCU uniform.

“We are creating a lot more chances and being dangerous, we have some really dynamic attacking players that are creating these chances,” Bell said. “Hopefully over the course of time, especially the next game, we are going to be creating even more.”

The Frogs will wrap up their three-match homestand this Sunday, Oct. 9, against Oklahoma State. Kickoff is scheduled for 5 p.m. and will be televised nationally on ESPNU.