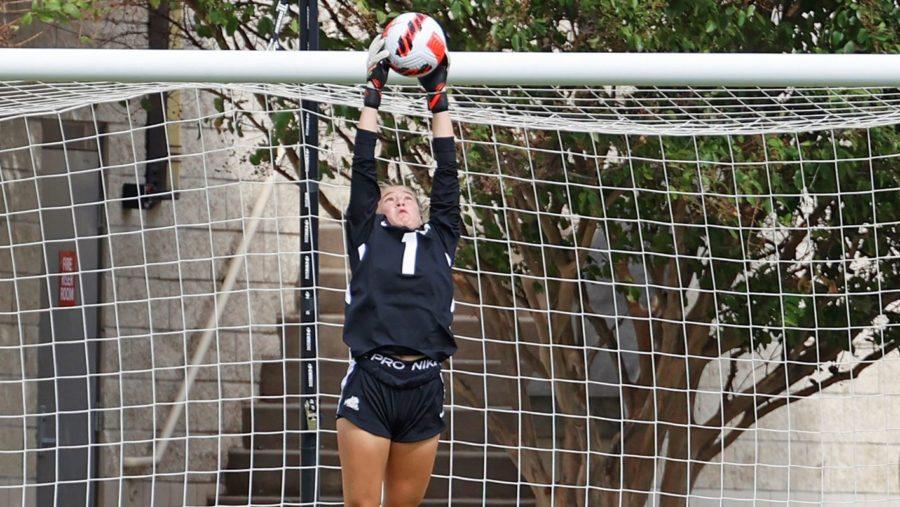 No. 11 TCU defeated Oklahoma State 3-0 to win its third straight game and improve to a 3-1-1 conference record.

This victory extended TCU’s longest winning streak against Oklahoma State, with 3 wins in a row, and completed its seventh shutout of the season.

“We like shutouts because it shows a total team effort from a defensive standpoint,” Bell said. “Going into this weekend, we should feel pretty good about ourselves as far as how we’re defending as a group and hopefully it carries on.”

Reflected by the final scoreline, the game was a TCU monologue, with the Horned Frogs in absolute control of the game.

The Frogs reaped their reward in the 18th minute after junior midfielder Gracie Brian scored her fifth goal of the season. Junior forward Grace Collins had an initial cross deflected, but managed to put the ball inside the box from the right wing in her second attempt.

Brian, with time and space, controlled on the opposite side of the 6-yard box, and scored with a shot to the near post.

“To score a goal against the wind in the first half was huge,” Bell said. “We knew it was going to be an uphill battle for them in the second half to play against it.”

A couple of collisions before the half forced TCU to adjust the backline. Senior defender Chaylyn Hubbard and graduate defender Jenna Winebrenner were both injured in the 22nd and 40th minutes respectively.

Both returned to start the second half, but Winebrenner was substituted again in the 49th minute after aggravating her injury.

In the 63rd minute, senior midfielder Payton Crews sent a long ball to senior forward Messiah Bright, who received the pass with her back to the goal. She turned and nutmegged sophomore defender Kionna Simon in one motion and found herself alone in the box to double the lead.

The Horned Frogs continued to have control of the ball, and the Cowgirls were still not able to create any opportunities to threaten the TCU goal.

In the 79th minute, a miscommunication between Cowgirl defenders in a clearance led to a handball in the box, with the referee awarding TCU a penalty kick.

Collins stepped up to the spot, but had her penalty saved by first-year goalkeeper Evie Vitali. However, the bounce favored the Frogs as Collins tracked down her miss to score the third and final goal of the match.

The win against the Cowgirls also marked Coach Eric Bell’s 100th win with the program in the middle of his 10th season as head coach.

“It’s nice to have the longevity, to still be here, and still be able to win games with this group is awesome,” Bell said. “It’s not just me, it’s everybody, and it’s a great program accomplishment.”

The next matchup for the Frogs will be Thursday against West Virginia in Morgantown in what will be a rematch from last year’s Big 12 title game.

“I’m sure they will have bulletin board material to serve as extra motivation, but for us, it’s going to a place that is a hard place to play,” Bell said. “Hopefully we can go out there and play soccer like we normally do and come back with a positive result.”

Kickoff is scheduled for 6 p.m. and the game will be available to stream on ESPN+.