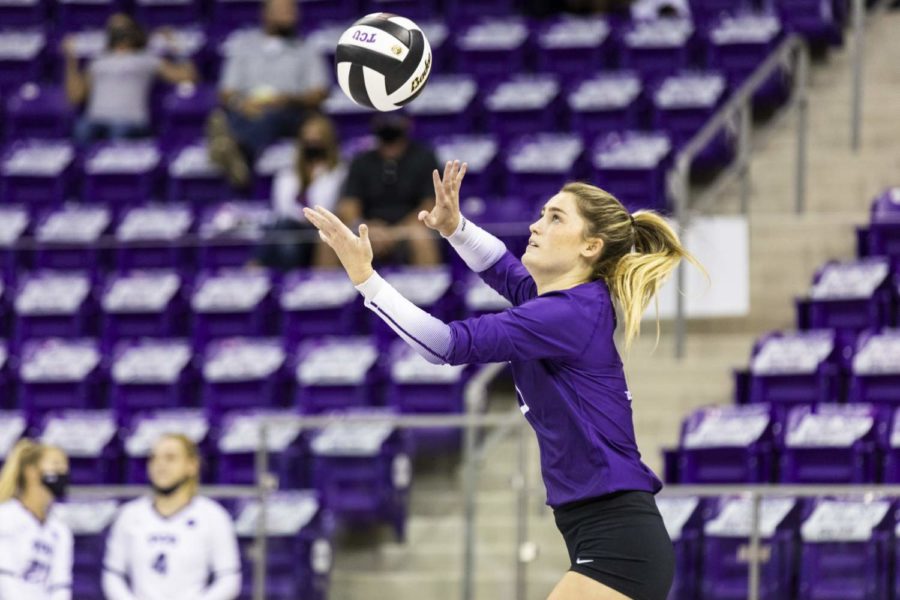 TCU libero Dani Dennison is now the all-time leader for digs with 1,441 digs in her career. (Heesoo Yang/Staff Photographer)

By Layna Steward and Charles Baggarly

When TCU volleyball completed its 2020-2021 extended season, defensive specialist and libero Dani Dennison was set to graduate from the school in a few months while sitting at third on the university’s all-time digs list.

Because of the extra year of eligibility that COVID-19 made available to her, Dennison made the decision to come back to TCU for a fifth year as a graduate student to help the Frogs bounce back from a disappointing year and chase history.

On Saturday, the Huntington Beach, California native etched her name in the TCU history books forever, becoming the school’s all-time digs leader with 1,441 in her career and counting.

Dennison’s achievement was not the only highlight of the weekend for the Frogs, as TCU followed a five set loss to Oklahoma on Friday night with a five set win over the Sooners on Saturday.

The win was TCU’s first conference win of the year, breaking a four-game skid for the Frogs. Here’s a look at how the weekend played out:

In its first home conference match of the season, TCU took a commanding two-set lead before dropping three straight to Oklahoma to drop the contest in five sets.

“As a staff, we need to figure out how to keep our team locked in for a longer period of time and play point for point,” said head coach Jill Kramer after the match.

Four of the five sets were decided by two points, resulting in some entertaining and tense gameplay. Despite the loss, the Frogs looked as sharp as they had all season.

Sophomore outside hitter Taylor Raiola led the offensive attack for the Frogs, tallying a team-high 18 kills. She also made a significant contribution on the defensive end, posting a team-high 22 digs, making her the first Horned Frog hitter to reach 20-plus digs in a match since 2019. This is her second-straight game setting career highs in kills and digs.

Dennison also had 22 digs, setting the foundation for a strong TCU passing game. She had nine digs in the fifth set, which kept the Frogs competing until the final whistle. This put the graduate student two digs away from tying the all-time program record.

In the opening set, middle blocker Afedo Manyang sparked the TCU offense with incredible attacking efficiency. She posted a .600 hitting percentage in the set on her way to a team-high .348 percentage for the match.

In a back-and-forth set with 15 ties and six lead changes, the Frogs came from behind late to win. The momentum switched after a successful TCU challenge of a hit by Raiola that was tipped by the Oklahoma frontline.

The Frogs continued their dominant play in the second set with a Raiola-led offensive attack. After a close contest, the Frogs fell behind 23-22 to the Sooners. They then closed the set on a 3-0 run behind a Raiola kill and two blocks from Myers.

“The first two sets were really close, and we stepped up and made the big plays at the end of sets, which was great to see,” said Kramer.

TCU started the third set on fire, winning four points in a row. Oklahoma responded with a four-point run of its own, though, and slowly built a commanding lead. The Frogs started to look defeated as the Sooners captured a momentum-shifting seven-point set victory.

“We just need to be better for longer,” said Dennison. “I think we kind of let off the gas, and they took advantage of it.”

TCU battled in the fourth set, but once again failed to close out an electric Oklahoma offense. Down 23-20, the Frogs pushed three, tying the game. The Sooners responded by forcing the Frogs to commit two attacking errors, sending the match into a tiebreaker.

Behind a stellar defensive performance from Dennison, who had nine digs in the shortened final set, TCU took a 12-10 lead. The frontline then collapsed, committing three attacking errors on their way to a low .080 attacking percentage that allowed a 4-0 Oklahoma run.

The Sooners won their third straight set, stealing the victory and keeping the Frogs winless in Big 12 conference play.

“There was a big momentum shift in the third that we didn’t grab back – we needed to be a lot more aggressive in those last three sets with some purpose in our attack,” said Kramer. “I was happy to see us battle in the fifth, but like we talked about in the locker room, every team in our league is great and we need to be tougher in the end.”

Although the team lost, it showed great promise. Setter McKenzie Nichols set the tempo, accumulating 50 assists throughout the match. Defensively, the Frogs were stellar, digging 73 and blocking 22 attacks.

In response to its heartbreaking loss on Friday night, TCU came out even stronger on Saturday, winning the match’s final three sets to earn a hard-fought 3-2 victory over Oklahoma for its first Big 12 win of the season.

Solidifying herself as one of TCU’s greatest defenders ever, Dennison set a new program record with a career total of 1,441 digs behind ten in the game to help lead TCU to the big win.

“I’m very proud of Dani’s effort over the last four-plus years,” said Kramer. “A program record is a lot of hard work, sweat and tears that people don’t see; and it shows up in spectacular performance on the court.”

To Dennison, though, the record took a back seat to TCU getting back in the win column.

“I thought the record was cool, but I think it was even better that we won,” said Dennison. “I don’t think it would have meant as much if we didn’t.”

In front of the seventh-largest crowd in TCU history (2,173 spectators), the Frogs got out to a slow start, falling into an 11-4 deficit right away, of which they would never be able to claw out.

Seven blocks and .462 hitting by the Sooners smothered the Frogs, giving Oklahoma the 25-13 win in its fourth-straight set victory in the series.

The second set looked better for TCU, as the team hit .300. Oklahoma did not do much slowing down, though, taking the set 25-22 to give the Frogs an 0-2 match deficit.

Outside hitter Julia Adams was not going to let TCU go down that easily, recording 10 kills to lead the Frogs to a 25-19 third set lead to give them some life.

This rallied TCU as a team, as six different players recorded kills in the fourth set. Middle blocker Myers led the way with six kills by herself, and the Frogs sent the match into a fifth set with a 25-22 fourth set victory.

The final set was intense, with the two teams knotted at 11 with the match on the line. A powerful kill from Manyang then capped off a 4-1 TCU run to end the match and give the Frogs the win. She recorded four kills in the fifth set alone.

Kramer said that the crowd Saturday night was the best they have had, and that the fans played a significant role when helping to push the team at the end of each set.

Up next, TCU will face the No. 1 University of Texas at Austin Longhorns on Thursday, Oct. 14 at 7 p.m.