‘Horns Down’: a conversation about the necessity of unsportsmanlike conduct penalties 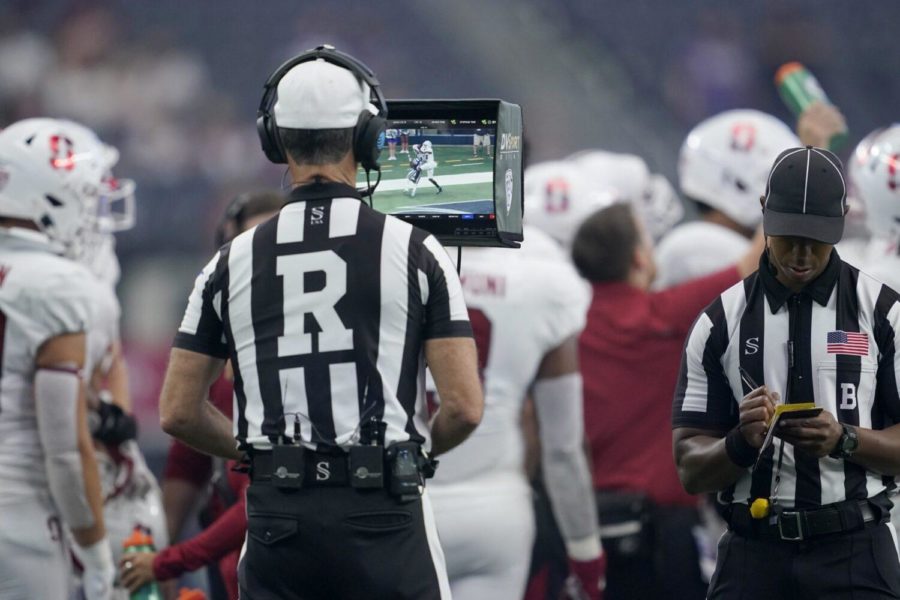 The NCAA surprised many fans and teams this summer when officials warned that players who are caught signaling Horns Down, mocking the University of Texas hand sign, could be hit with an unsportsmanlike conduct penalty.

Though trash-talking fanatics have their disagreements with the new rule, league officials said the change, like the penalty itself, is meant to control the behavior of players and the presentation of the game itself.

Even before the NCAA officially announced Horns Down would be a penalty, it could be flagged as unsportsmanlike conduct.

West Virginia wide receiver David Sills flashed the hand signal after scoring a touchdown against Texas in 2018, and the team received a 15-yard penalty.

The Big 12’s statistics for unsportsmanlike conduct penalties aren’t available to the public. But Burda said without them, violent behaviors or outbreaks during games could be more prevalent.

He also said in addition to players, fans can get called out for being too harsh to their rivals.

It’s ultimately the referee’s decision, but if fans are somehow delaying a game, the team will receive a penalty, Burda said.

“It very rarely happens,” Burda said. “There have been incidents where the case of unruly portions of a crowd where the referee has asked that that portion of the crowd be cleared out or the game be temporarily halted until they can bring that section of the crowd under control.”

A team could also receive a penalty if fans are throwing objects on the field.

“I’ve seen it sometimes with snowballs,” Burda said. “In cold weather games in the north, where you have snow, sometimes fans have taken it upon themselves to throw snowballs at the opposing players.”

When you think a flag has been thrown but it’s really a tortilla … that’s @TexasTechFB!#TexasTech#Football #News

Some of the unsportsmanlike penalties in place at the collegiate level are to reinforce the notion that football is a team sport, not an individual sport, Burda said.

In a statement on sportsmanship in the NCAA Football Rules Book, the NCAA Football Rules Committee wrote, “After reviewing a number of plays involving unsportsmanlike conduct, the committee is firm in its support of the unsportsmanlike conduct rules as they currently are written and officiated. Many of these fouls deal with players who inappropriately draw attention to themselves in a premeditated, excessive or prolonged manner. Players should be taught the discipline that reinforces football as a team game.”

The NFL takes a more relaxed approach to on-field celebrations, but Burda said college sports are emphasizing the team, not the player.

“In the NFL, it’s quite common to see choreographed celebrations in the end zone following a touchdown or a score,” he said, “wherein the NCAA college game, the rules are very explicit about individuals not engaging in behavior that draws attention to themselves and takes attention away from the team.”

College football players are amateur athletes, and officials don’t want unsportsmanlike conduct to become a focal point of the game at that level, Burda said.

“There needs to be a fine line between being passionate about playing the game and doing things to belittle your opponent,” Burda said.

Unsportsmanlike conduct covers everything from taunting to celebration.

According to the NCAA Football Rules Book, unsportsmanlike acts include, but are not limited to:

(a) Pointing the finger(s), hand(s), arm(s) or ball at an opponent or imitating the slashing of the throat

(b) Taunting, baiting or ridiculing an opponent verbally

(c) Inciting an opponent or spectators in any other way, such as simulating the firing of a weapon or placing a hand by the ear to request recognition

(d) Any delayed, excessive, prolonged or choreographed act by which a player (or players) attempts to focus attention upon himself (or themselves)

(e) An unopposed ball carrier obviously altering stride as he approaches the opponent’s goal line or diving into the end zone.

(f) A player removing his helmet after the ball is dead and before he is in the team area (Exceptions: Team, media or injury timeouts)

(h) Going into the stands to interact with spectators, or bowing at the waist after a good play

(i) Intentionally removing the helmet while the ball is alive

After any play, the player in possession of the ball must immediately give the ball to an official or leave it on the field or the team will receive an unsportsmanlike conduct penalty, according to the NCAA Football Rules Book. This prohibits:

(a) Kicking, throwing, spinning or carrying (including off of the field) the ball any distance that requires an official to retrieve it

(b) Spiking the ball to the ground (Exception: A forward pass to conserve time)

(c) Throwing the ball high into the air

(d) Any other unsportsmanlike act or actions that delay the game