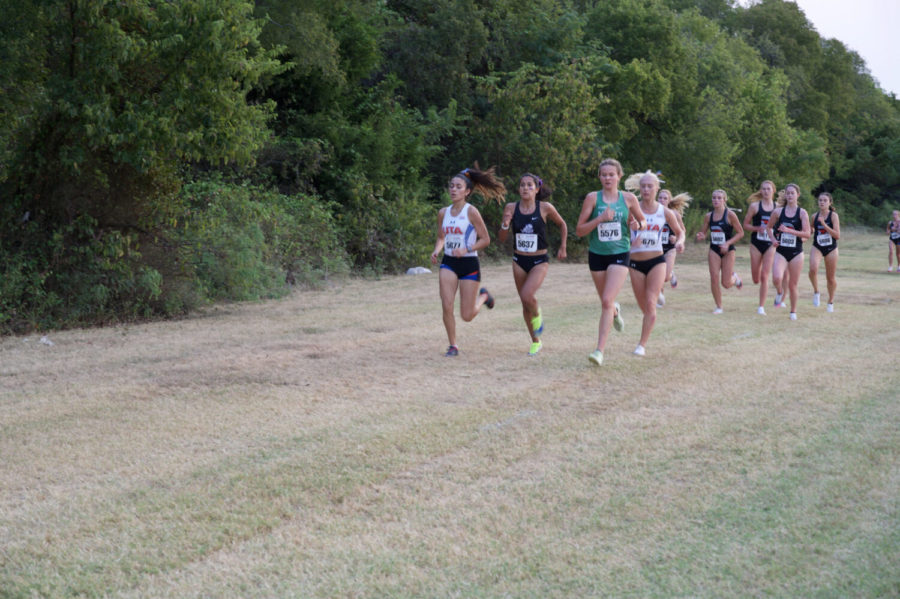 Mariana Martinez already had family ties at TCU, but the rising cross country star had a long road before garnering success at TCU.

Weekly, Martinez logs an average of 50 miles, which is separated into two categories. She runs 35 to 40 miles on weeks when the team competes and 55 miles when the team does not compete. Before its last 6k race, the team went through a period of training called “Hell Month.”

“The workouts are so intense because we have no time to taper between one race and another,” Martinez said.

Tapering means lowering mileage or workouts so athletes can prepare for upcoming meets or recover from recent meets.

Martinez said she likes the long break between races, because the team can really focus on getting stronger.

During “Hell Month,” Martinez said some of her favorite workouts were “8×800 repeats on the track because you can start out slow and get faster based on how you feel,” along with mile repeats.

“It’s the perfect mix of speed and distance,” said Martinez of the workout.

A big focus for distance runners is their endurance, which is showcased in the long run. This workout is longer than any other run they do, but the focus is on how the runners’ legs feel throughout. Martinez said her longest run to date was 13.5 miles.

All of the hard work put in during the week leads to how well runners perform in their meets.

On Oct. 16, TCU traveled to College Station, Texas, to compete in the Arturo Barrios Invitational. Martinez and the rest of the women’s team ran a 6k race (3.73 miles). She finished 27th overall out of 265 runners in the pack, while the team finished 21st out of 33. Martinez beat out all of the University of Texas at Arlington runners, whose team is ranked 14th in the region.

Before that, the team ran at the UTA Gerald Richey Invitational Season Opener. There, Martinez finished first for TCU women and fourth out of 51 runners with a 5k time of 17:58. This had her averaging around 5:46 pace per mile and finishing just 14 seconds behind first place.

Even as a sophomore, Martinez has built up an impressive resume. She earned a bronze medal in the 5k at the Pan American U20 Championships in Costa Rica while in high school, and her personal record (PR) in the 5k coming into the 2021 season was a 16:47 (about 5:24 pace per mile for 3.11 miles).

Martinez fell in love with long-distance running after her older brother Fernando Martinez, a pole vaulter for TCU’s track and field team, introduced her to the sport when they lived in Canada. Her brother also influenced her decision to come to TCU.

“I raced [at TCU] in 2018 while I was in high school, and I talked to the coaches and had a good race. I fell in love with the school,” Mariana Martinez said.

She also said her parents’ belief in her led her to ultimately pursue the sport collegiately.

Before race days, Martinez always focuses on eating a good dinner the night before and breakfast the morning of the race. While eating well is important, Martinez said she also values resting her body and getting as much sleep as possible.

When asked about how she balances schoolwork and workouts, she simply said, “That’s a good question.” Martinez usually goes to classes after her morning workouts and then rests before doing homework and going to bed. This has become somewhat routine for her on weekdays, and she packs her schedule.

“During the week it’s really stressful because I can’t see my friends … I’m strictly school and track,” says Martinez. “I try to go to bed at least before 11 p.m. … that’s the goal, but I take a lot of naps [during the day] also,” added Martinez.

She said her dedication comes from her commitment to “being the best student-athlete as possible.”

“Last year we could attend our classes on Zoom while we were at meets, but this year it’s going to be more stressful,” Martinez said.

Behind every great runner is a great coach, and Martinez has one in Head Coach Lisa Morgan-Richman. To help improve Martinez’s training, Morgan usually has runners from the men’s team train with her.

One of Martinez’s favorite memories of Coach Morgan was at Texas Relays at the University of Texas at Austin. While she ran, she could hear her coach yelling from the other side of the track, pushing her to finish.

Martinez heralded Morgan as having “so much energy, and [she] pushes and motivates you every single day.”

Of course, every student-athlete needs some time to relax and enjoy themselves. Martinez says she loves hanging out with friends and watching movies. She also spends her free time cooking and making muffins. After that, it’s more sleep.

Looking back on her time at TCU, her favorite running memory has been winning her 3k (1.86 miles) race with a PR of 10:03. Besides the win, Martinez also loves the support that comes from others, whether they are familiar faces or not.

“It was fun for all the parents to go and everyone to support you, even if they don’t know your name,” she said.

Despite a strong start to her TCU career, Martinez has more that she wants to accomplish before she leaves Fort Worth. Some personal goals she has set for herself this season are to break her 16:47 PR in the 5k. She also wants to score in the Big 12 Championships later this season as well as run the 10k (6.2 miles) during track season, which she hasn’t raced before.

It’s strong, dedicated runners, like Martinez, who give hope to a TCU women’s cross country team that is on the up-and-coming and filled with young talent.