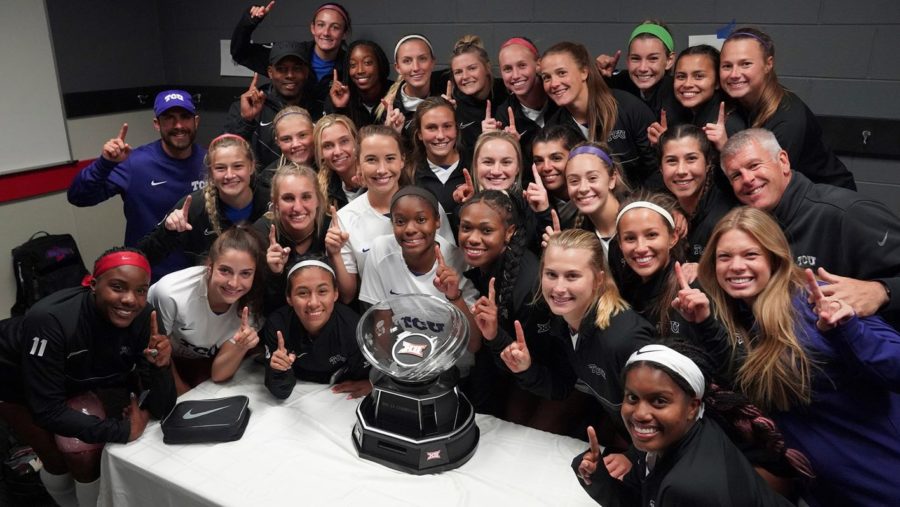 No. 6 TCU celebrates after being awarded the Big 12 regular season trophy on Thursday, Oct. 28, 2021. (Photo courtesy of: GoFrogs.com)

The Big 12 regular season culminated this past Thursday with No. 6 TCU securing its second consecutive title after a 1-0 road victory against Texas Tech.

After a year of no postseason conference play due to the pandemic, teams will have a chance to compete for another title: the Big 12 Championship held in the Round Rock Multipurpose Complex.

Teams will play single elimination games starting from the quarterfinals stage to determine the champion. Regular season conference standings determined the seed that each team will hold.

The Horned Frogs come in as favorites not only for this matchup but also the entire tournament. After an inconsistent start with a loss to Baylor and a draw at Texas, TCU found its footing and finished the year on a seven-game winning streak.

The Frogs bring a great combination of a productive offense and stalwart defense, both tied for first in the conference. The increased depth for this team has allowed Coach Eric Bell to have his starters rested for these conference playoffs as well.

Iowa State, on the other hand, managed to get into the Big 12 Championship with a victory against Kansas State in its last game of the regular season.

Prior to that win, the Cyclones had lost five consecutive games. One of those losses was a 3-0 defeat at home versus TCU. With only two conference victories this season, anything other than a first round exit for Iowa State would be a massive upset.

Normally, finishing a season undefeated is a good recipe for a title. However, Texas fell a little short as its three draws put the team just one point behind the Horned Frogs in the final standings.

The Longhorns present themselves as the primary threat for TCU’s title run. Tied with the Horned Frogs for best defense in the conference, Texas also possesses several weapons in its offensive arsenal that can be difficult to contain for any team.

On the other side, you have a much-improved Oklahoma team. The Sooners defense has been catastrophic at moments, but they closed out the season with two shutouts and a two-game winning streak.  Also, their offensive capabilities are very close to those of the best teams in the Big 12, scoring just one goal fewer than the Longhorns.

The most recent matchup in the Red River Rivalry was worthy of all the headlines. Texas led the Sooners 3-0 with less than 40 minutes to play, but Oklahoma bounced back and by the 83rd minute, the game was tied. When it seemed like the game would be going to overtime, the Longhorns scored their fourth of the afternoon, sealing their victory.

Despite the expectation of having Texas come out victorious, this rematch should have plenty of emotions.

Consistency issues have prevented the Lady Bears from standing atop the conference. They were the only team to beat TCU, but also lost two of their matchups against the bottom four teams in the Big 12.

Baylor is ranked in the bottom half in offense and in the middle of the pack in defense but its knack for taking advantage of timely moments to come out with wins against seemingly superior competition makes the team a dangerous opponent to face.

Projected as the conference champion according to the Big 12 Soccer Preseason Poll, the Mountaineers have been disappointing this season.

Their defense has been staunch, conceding only one more goal than TCU and Texas. However, they have really missed some of that creativity in the final third after some key seniors graduated the past spring.

The regular season matchup ended in a scoreless draw, which shows the parity between these two teams. West Virginia’s pedigree and postseason experience, despite having the lower seed, might give them a slight edge in a matchup too close to call.

For the second season in a row, Oklahoma State has fallen short when facing the elite teams in the conference, but the team has still taken care of business when facing the bottom half of the Big 12.

Ranking fourth in offense and sixth in defense, the Cowgirls have been average. They still show bursts of that explosive counterattacking offense that took the league by surprise last season, but with teams expecting it, they have not been as effective.

Texas Tech, on the other hand, was a wild card entering conference play. A weak schedule made the team seem stronger, but conference play brought the Red Raiders back to reality.

They are tied for first in the Big 12 in goals scored, but their 7-0 beatdown of the Sooners on Matchday 1 skews their offensive numbers. The Red Raiders allow more than a goal a game, but are still ahead of the Cowgirls in that category.

All statistics point toward Texas Tech being slightly favored, but Oklahoma State’s better form towards the end of the season might tip the scale towards the Cowgirls. Regardless, this could be the most even first-round matchup.

Messiah Bright (TCU) – The striker has been in exceptional form, scoring in four of the Horned Frogs’ last five games. She finished conference play as the leader in shots and shots on goal, as well as leading the best offense in the league. Scoring the title-clinching goal was the culmination to a great senior season.

Brandi Peterson (TCU) – The best defender in the Big 12. Peterson won Defensive Player of the Week during half the weeks in conference play. An excellent one-on-one defender, Peterson took her game to another level by becoming a threat offensively down that left flank.

Julia Grosso (Texas) – After a dream summer, where she scored the penalty kick that gave Canada its first Olympic gold in soccer, Grosso returned to Texas. She has dominated in the midfield against all kinds of opposition, especially in the final third with three goals and two assists in six games.

Lexi Missimo (Texas) – One of the season’s revelations. The first-year midfielder has had a four-goal outing as well as a four-assist game this season. Missimo’s creativity with the final pass allows her to lead the conference in assists and become a difference maker in the final third.

Trinity Byars (Texas) – The biggest beneficiary from having two engines like Grosso and Missimo behind her. The first-year striker tallies 14 points, good enough for second in the conference. She’s a dual-threat forward – great with the ball in her feet, as well as a threat in space.

Taylor Moon (Baylor) – A physically dominant box-to-box midfielder. Moon leads the Lady Bears in scoring as well as being a presence in the middle. Transitions go through her, making her vital to the team’s functioning.

Jennifer Wandt (Baylor) – Among the teams in the half of the conference, there is no keeper with more saves than Wandt. The difficulty level of some of her saves make her even more relevant.

Kirsten Davis (Texas Tech) – The top goal scorer in the Big 12. The senior has provided experience for a Texas Tech team that looked very different from last year. A combination of elite finishing and a solid back-to-the-goal game make her a nightmare for opposing center backs.

Macy Blackburn (Texas Tech) – The right back has been a menace, consistently presenting herself as an alternative by widening the pitch. She has been very assertive in the final third, making her the defender tied for the most goal contributions in the conference with three assists.

Olyvia Dowell (OSU) – Out of the four games that the Cowgirls won in conference play, Dowel scored the game winner in two. Her ability to carry the ball in transition and also get into the box make her the biggest threat that Oklahoma State has on offense.

Kim Rodriguez (OSU) – The Cowgirls’ most versatile player. The Mexican international has played in several positions across the defense and midfield. Despite not having her best season, her accurate left foot helps her take the ball cleanly out the back as well help her team offensively with three assists.

Jordan Brewster (West Virginia) – The best center back in the conference. Brewster has great positioning and anticipation that have made West Virginia one of the premiere defensive teams. As a senior, she is the team’s unquestionable leader, so the Mountaineers will need her at her best if they want to make a deep run.

Bri Amos (Oklahoma) – She is not the team’s top goal scorer and is probably not the best player either, but no one has more game-winning goals than Bri Amos. All of her goals have led to victory and the Sooners only won once in conference play when Amos did not score.

Jordan Silkowitz (Iowa State) – Despite missing a third of the games due to injury, the junior goalie had the second-most saves in the conference. Silkowitz also had the highest saves per game ratio with 7.83 saves per game. Even more importantly, her ability to play out the back as a sweeper keeper makes her even more valuable to her squad.

With Kansas as the last team to win a Big 12 postseason tournament in 2019, there will be a new champion with the Jayhawks missing the event.

TCU and Texas appear to be a step above the rest of the pack, but previous editions of the Big 12 Championship have shown that regular season success does not always translate to this playoff format.

This will also be the last opportunity for many teams to secure a bid for the NCAA Tournament played in November.

The quarterfinal round will be played on Sunday, Oct. 31. The semifinals will be held on Thursday, Nov. 4. All games in these rounds will be available to stream on ESPN+.

The Championship game will be played on Sunday, Nov. 7 at 2:30 p.m. and will be broadcast on FS1.