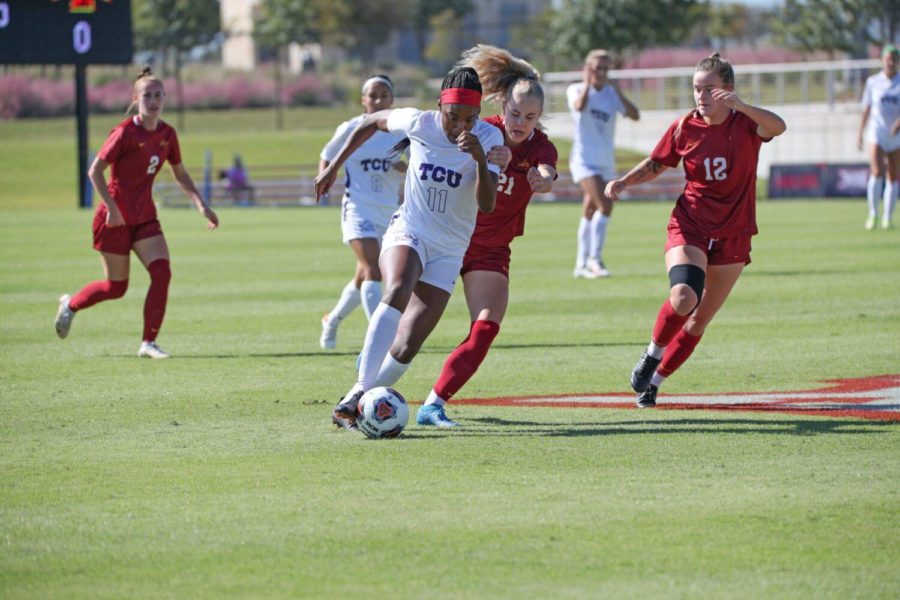 Senior forward Messiah Bright dribbles past defenders in the quarterfinal matchup of the Big 12 Championship against Iowa State in the Round Rock Multipurpose Complex on Oct. 31, 2021. (Photo courtesy of: @TCUSoccer)

After a scoreless draw following two overtime periods, No. 6 TCU defeated Iowa State 3-2 in penalty kicks to advance to the semifinals of the Big 12 Championship on Sunday afternoon.

Senior defender Brandi Peterson scored the decisive penalty by driving it left and deceiving junior goalkeeper Jordan Silkowitz, who had made a very difficult save in the previous kick.

“She’s got ice in her veins,” head coach Eric Bell said about Peterson. “Defender of the Year in my opinion and she went up there and stroked it into the back of the net. That’s what we practiced on and that’s what she showed today.”

For TCU, the shootout saw senior defender Tatum Condrey and graduate defender Jenna Winebrenner scoring the other two goals. Junior forward Grace Collins missed hers off the crossbar, and senior forward Maddy Warren had hers saved.

For Iowa State, three players missed high, resulting in the victory for the Horned Frogs.

In the run of play, TCU was constantly dominating possession, but Iowa State did a good job of keeping its lines together, preventing the Horned Frogs from generating any clear chances.

The first half was without many emotions.

Off the bench, junior winger Skylar Heinrich was the most dangerous player for the Frogs, showing her electric pace and taking opponents off the dribble.

To start the second half, TCU made some adjustments trying to find its forwards in space with balls over the top of Iowa State’s defense.

Even though that approach generated several dangerous incursions, the Horned Frogs were unable to get good looks at goal, with the exception of a shot by Collins that went wide in the 87th minute.

Both overtime periods were more of the same, as the Cyclones took an even bigger step back. For most of those periods, all Iowa State players were behind the halfway line.

Despite TCU outshooting the Cyclones 19-3, only five of those shots were on goal, and none of them required much effort from Silkowitz to make a save.

This draw also marked the 9th shutout of the campaign for the Horned Frogs, allowing sophomore goalkeeper Lauren Kellett to tie the school record for most shutouts in a season.

TCU will stay in Round Rock to prepare for the semifinal matchup on Thursday against the winner of Texas Tech vs. Oklahoma State.

“Before you gotta rest,” Bell said. “It’s been a very emotional weekend. Thursday was very emotional and obviously, this was as well. We gotta get mentally prepared for next Thursday.”

The match is set for 2:30 p.m. and will be exclusively streamed on ESPN+.