No. 7 TCU defeats Texas Tech, will play for the Big 12 Championship 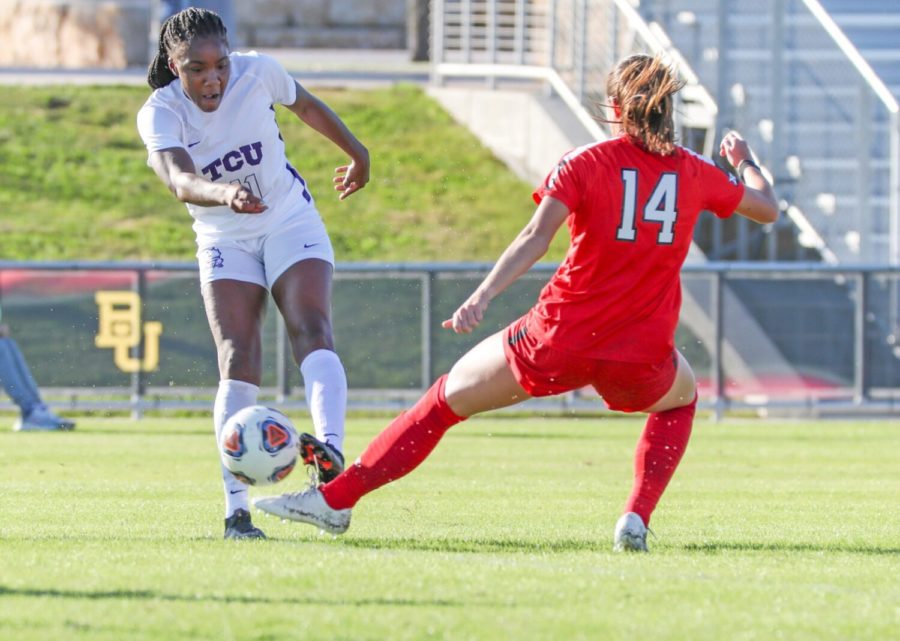 Senior forward Messiah Bright led the way with two goals against Texas Tech in the Big 12 Championship Semifinals in Round Rock, Texas on Thursday, Nov. 4, 2021. (Photo courtesy of gofrogs.com)

A stellar Messiah Bright led the Horned Frogs, as No. 7 TCU defeated Texas Tech 3-0 for a place in the Big 12 Championship final on Thursday evening.

The senior striker scored a brace in the first half that set the tone for what would come after. She has been the Horned Frogs’ most in form player on offense as of late, scoring the last three goals for TCU up to that point.

“I feel very confident,” Bright said. “My teammates were able to give me the ball, so this drives me even more to play for them as well as go in for another game against another great team.”

In the 11th minute, graduate defender Jenna Winebrenner led Bright with a long ball in space. Bright beat her defender for control of the ball, got inside the box, nutmegged another defender and scored off a deflection after a shot with her left foot.

Bright continued to be active in the front of the attack. She had an opportunity to double TCU’s lead after a cross to the near post by Grace Collins, but was denied by the goal post.

Six minutes later, Bright would get another chance again and this time, she would not miss. She received the ball from Collins in the right corner of the box and with her right foot, curled the ball over the goalkeeper into the left angle.

“She brings a mentality that she wants to win and be good,” head coach Eric Bell said of Bright. “I think that’s probably the most important thing and everyone follows her lead in that regard.”

TCU was in complete control of the ball and the matchup, allowing almost no chances for Texas Tech in the first half. Winebrenner and first-year defender Brenna Brosam were commanding in the middle of the defense, thwarting every incursion from Texas Tech.

“It was a really good first half with a really professional approach,” Bell said. “We’re happy with the result.”

The second half was a drastically different story. Texas Tech increased the pressure and forced the Horned Frogs to take a step back to defend their lead for the first 20 minutes of the second half.

Eventually, TCU would find its footing and go back to the possession game that has been so successful for the Frogs this season.

To close out the game, in the 80th minute, first-year forward Lauren Memoly sprinted on the right wing and crossed the ball into the far post where junior forward Skylar Heinrich scored on a tap-in.

With the victory, TCU will have the opportunity to become the second Big 12 school ever to win both the regular season title and postseason tournament after West Virginia did so in 2013, 2014 and 2016.

For the championship game, the Horned Frogs will be without 2nd Team All-Big 12 midfielder Payton Crews, who has already missed two games due to a knee injury.

Regardless, Bell still sees his team in a good position.

“We got a next man up mentality,” he said. “We’ve always been the bridesmaids, and it’s time to be the bride and come back home with a championship.”

On Sunday, the Frogs will face the winner of the other semifinal matchup between West Virginia and Texas. The championship game will be broadcast on ESPNU, and kickoff is set for 2:30 p.m.