No Patterson, no problem: TCU knocks off No. 12 Baylor 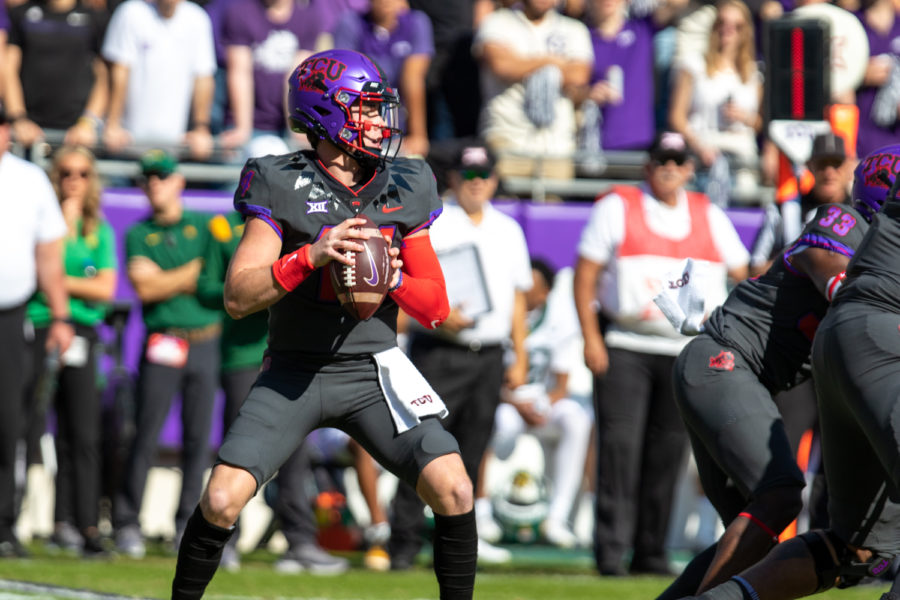 If you had told TCU interim head coach Jerry Kill last Sunday that he would be watching TCU students rush the field following an upset win over No. 12 Baylor just six days later, he actually would have believed you.

“Did it surprise me completely? No. Our kids practiced Tuesday, Wednesday, Thursday, just locked in and focused,” Kill said postgame. “I asked them to do some things and it was good, and they responded well to what we told them. I told them to just listen. I had kind of a funny feeling behind me that our kids were ready to play.”

Despite missing their queen bee of almost 22 years, TCU football said, “No Patterson, no problem,” on Saturday afternoon and put together their most cohesive performance of the season to knock off No. 12 Baylor at home 30-28.

After starting quarterback Max Duggan was ruled out hours before the game, Oklahoma-transfer Chandler Morris stepped in and delivered a performance for the ages, throwing for 461 yards and two touchdowns on an efficient 71% completion.

“He [Morris] played pretty good football. He threw for 461, so, I mean, there are a lot of people that would like to be able to do that,” Kill said. “The most important thing? We won. You judge a quarterback on winning, and we won.”

His 461 passing yards were the fourth-most ever by a Frog in a single game and the most by a TCU player since 2014.

The redshirt first-year also ran for 70 yards and a score on the ground, often using his legs to get out of intense pressure from the Baylor defense and extend plays. He even caught a pass as well for seven yards on a trick play.

“I’m not going to lie, yeah, I was surprised I got out of some of the pressure, some of the hits,” said Morris. “My little frame, I need to put some weight on this offseason, but yeah I was a little surprised.”

Though Morris’ brilliance was a surprise, it was the effort that the TCU defense put forth against Baylor that was the most shocking, given their immense struggles through the first eight games of the season.

The Bears entered the game ranked second in the Big 12 with 465.5 yards of offense per game and third in the conference with 37.4 points scored per game.

The Frogs, who have given up over 400 yards in all but two games this year, held Baylor to just 393 yards of offense and only 28 points scored. 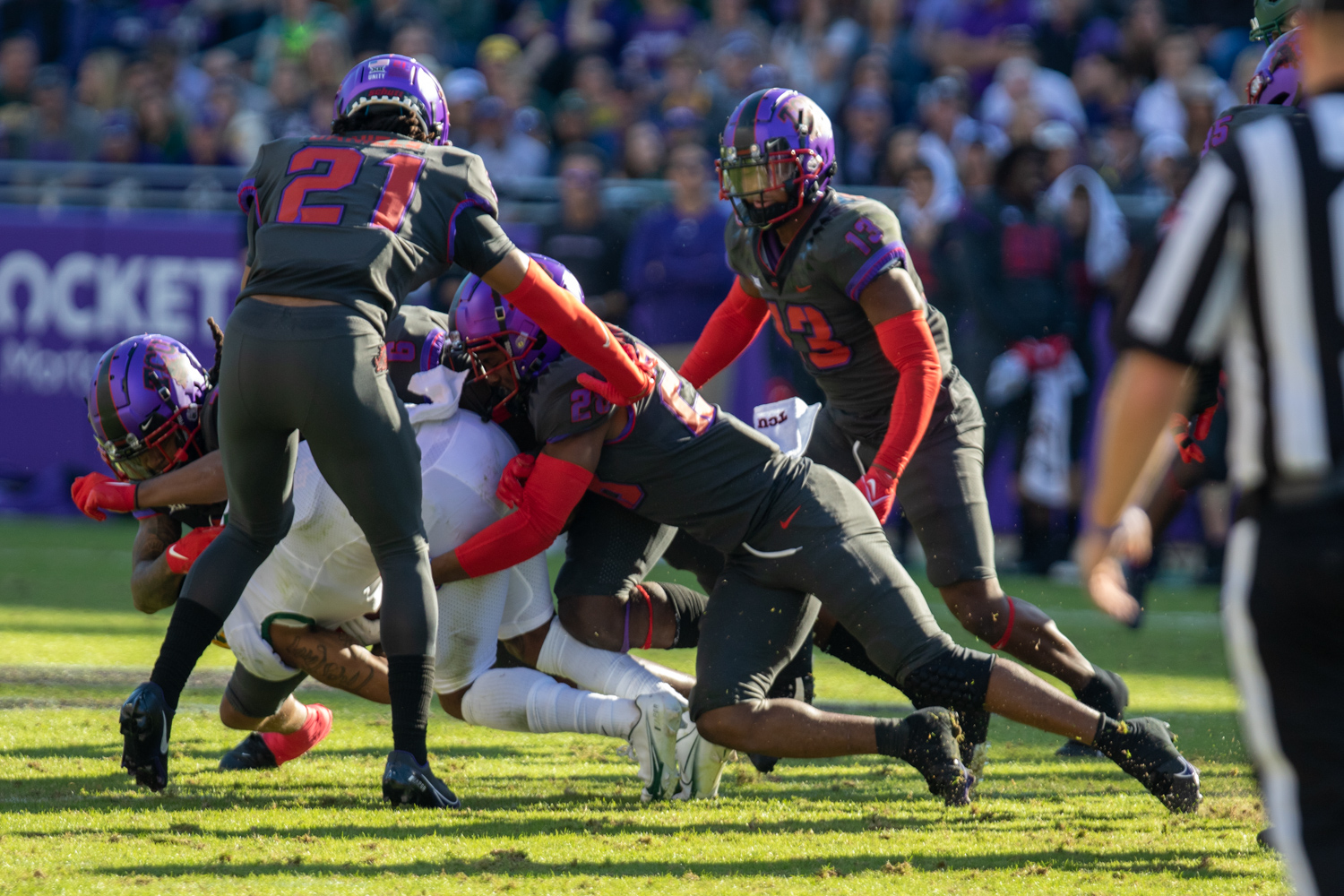 After TCU missed a field goal with 1:56 left to go in the game, it was the Frogs’ defense that was tasked with protecting their two-point lead.

The Bears got down to the TCU 34-yard line in just 53 seconds, but linebacker Shadrach Banks intercepted Baylor quarterback Gerry Bohanon’s pass with just over a minute remaining to seal the win for the Frogs.

After transferring from Texas A&M to TCU in May and moving from wide receiver to linebacker, Banks was rumored to be a “locker room cancer” by many around the college football world. Morris and the Frogs could not think differently of the first-year.

“That was awesome. Obviously, he [Banks] played receiver in high school, so he’s an athlete,” said Morris. “He’s been nothing but great to us. His locker is next to mine, I love him. He’s awesome.”

Bohanon finished the day 14-for-20 with 219 yards and three scores, but his two interceptions (tied for his career-high) proved to be the difference in the game.

To no surprise given the week they had, TCU looked lost and out of focus to start the game. The Frogs punted on their first drive before giving up a touchdown on a 3-play, 63-yard drive by the Bears.

TCU then fumbled the ball right back to Baylor two plays later.

The Frogs locked in after that though, forcing the Bears to punt on three-straight possessions while scoring four-straight times going into the halftime break.

Things really got rolling for TCU in the third quarter, though, as Morris led the Frogs on a 12-play, 83-yard drive to put them up 23-14–their biggest lead over any team since they beat Texas Tech by 21 almost a month ago.

Baylor would use a 41-yard pass to receiver Tyquan Thornton get into position and the score as a response, but Bohanon’s first interception of the day followed by another 12-play touchdown drive by the Frogs got TCU to the 30-point mark and a lead they would never lose.

The final touchdown for the Frogs had come via a pass from Morris to receiver Quentin Johnston, who caught five passes for 142 yards to lead the game on the receiving end. 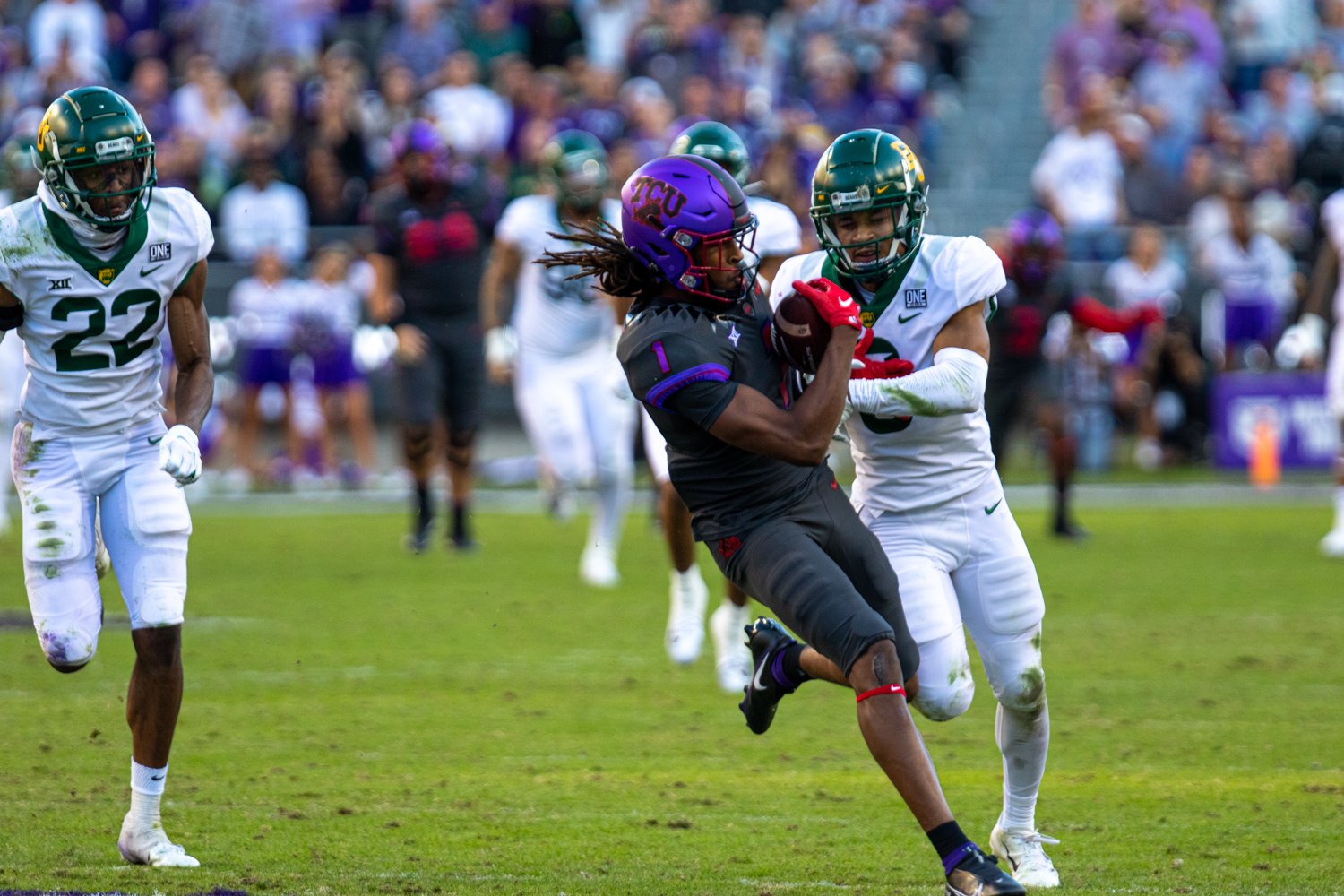 The sophomore’s performance had come at a perfect time for TCU, especially after he dropped a crucial deep ball and fumbled two weeks ago in the Frogs’ loss to West Virginia.

“My coaches tell me all the time, whatever happened, just keep it in the past,” said Johnston. “I tend to hold on to a lot of stuff, which I’m still working on, but I couldn’t take that into this game. I just had to leave that in the past and keep moving forward.”

TCU has now won six of their last seven against their in-state rival, with this one being, perhaps, the most surprising.

While many had already counted this season, especially given Patterson’s departure, a lost cause for the Frogs, TCU has not lost sight of their goals for their 2021 campaign.

“At the end of the day, it’s not about proving people wrong,” cornerback Tre Tomlinson said. “It’s more so knowing what we can do and coming out and doing it every week. We’ve always known what we can do.”

The Frogs have a chance to take another step forward this Saturday, as they head on the road to take on No. 11 Oklahoma State. Kickoff in Stillwater is TBD.