Champions again: No. 7 TCU comes back to win Big 12 tournament 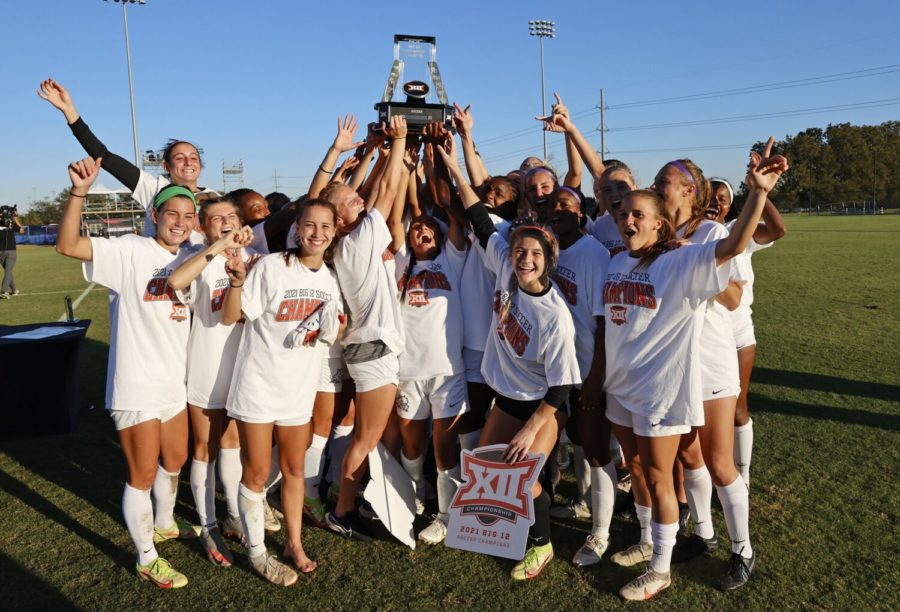 After falling behind in the first half, No. 7 TCU turned the game around for a 2-1 victory against No. 24 Texas to earn their first ever Big 12 tournament title on Sunday afternoon.

Like they have been all year, senior striker Messiah Bright and first-year forward Camryn Lancaster were the goal scorers for the Horned Frogs.

“I think they followed the game plan a little bit better,” said head coach Eric Bell. “I think [Texas] did a very good job of clogging up the middle and we wanted to go around, and I think we did a really good job with that.”

In the 60th minute, senior right-back Chaylyn Hubbard stole a ball at the halfway line. She went forward until she laid it off right for Bright who finished with a shot to the lower far post to tie the game.

This goal was the third of the tournament for Bright, as well as her 13th of the season.

“She’s special, she’s a gamer, she scores big-time goals, she’s a handful for defenders to deal with,” Bell said of Bright. “We’re happy to have her.”

When the game seemed headed to overtime, Bright found junior forward Grace Collins open on the right wing. Collins crossed the ball to Lancaster, who made a run to the near post.

After her initial shot was deflected by the defender, Lancaster tapped in the deflection to give TCU the lead with six minutes to play.

“It was an amazing feeling to be able to score,” Lancaster said about scoring her third, and most important game-winning goal this season. “It is unexplainable how happy I am.”

The comeback did not come easy for the Horned Frogs, after a very disputed matchup for most of the first half.

With a lot of traffic in the midfield and little action in either of the two areas, Texas was consistently in good position. First-year midfielder Ashlyn Miller scored her first career goal with a strike from outside the box that flew past sophomore goalkeeper Lauren Kellett and snuck in the top right corner.

After opening up the scoreline, Texas gained some momentum and with some distant shots forced Kellett to make some difficult saves.

Nevertheless, the Horned Frogs bounced back and emerged victorious for the first time after losing in the final twice before in the past five years.

The victory made TCU the first program in the Big 12 to win both the regular season and conference championship in the same season since West Virginia last did it in 2016.

“It’s just a beautiful feeling to finally win a Big 12 Championship, and doing it playing along with my best friends,” said Bright. “I’m overjoyed, and I want to take this confidence headed into the NCAA tournament.”

Both teams are likely headed to the NCAA tournament set to start next weekend, with TCU expected to host their first round matchup.

“Getting back to the Garvey and playing in front of our home fans, it’ll be nice to be able to do that, hopefully for a long period of time,” said Bell.

The Horned Frogs will find their first-round matchup on Monday at 3:30 p.m. The selection show will be streamed on NCAA.com.