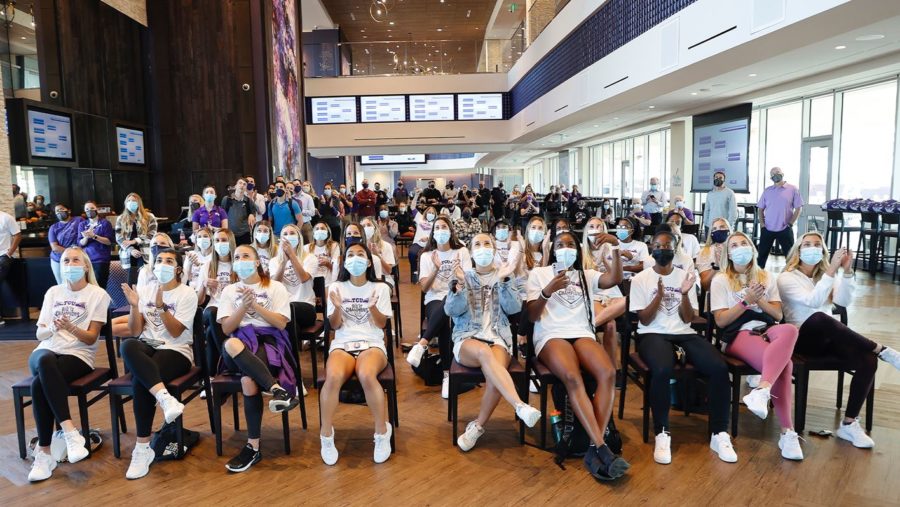 TCU Soccer found out its next rival during a screening of the selection show at the Legends Club at Amon G. Carter Stadium on Nov. 8, 2021. (Photo courtesy of: goFrogs.com)

The selection show for the NCAA Soccer Championship revealed TCU will be facing Prairie View A&M in the first round of the tournament.

The selection committee gave TCU a No. 4 seed in the lower left side of the bracket.

The Horned Frogs earned their automatic bid after winning the Big 12 Championship this past weekend. However, their presence was never in question after finishing first in their conference regular season.

With TCU ranked in the top 10 in both the United Coaches Poll and the TopDrawerSoccer Rankings, it was somewhat surprising that TCU had 12 teams considered ahead of it for the tournament.

“I thought we were gonna get a higher seed,” Coach Eric Bell said. “So, we’ll use that as motivation to show [the selection committee] and the rest of the country that we’re better than a number four seed.”

Aside from the Horned Frogs, Texas was the only other team in the Big 12 to make the cut into the final 64 teams.

“It’s hard to make an NCAA Tournament,” Bell said. “You have to have a resume and unfortunately they looked at it and didn’t think the schools in our league had the proper resume to get in. I think we should have more, but they didn’t.”

TCU will have the opportunity to host the Panthers in its first round matchup.

“We’ve earned that,” Bell said. “Hopefully we’ll have a large crowd here on Friday to show the support that they’ve shown us throughout all of the season.”

Prairie View will visit Fort Worth with a 13-3-2 record and a Southwestern Athletic Conference title under its belt after defeating Grambling State in its conference final.

Despite winning its league title and having an impressive record, the Panthers have yet to face a ranked opponent this season. They also recorded losses against Louisiana, Texas Southern and a 2-0 defeat against Stephen F. Austin, a team the Horned Frogs thrashed with a 6-0 scoreline earlier this season.

For TCU, there are certain considerations that Coach Bell said the team wants to take when preparing for the matchup.

“I think we have to make sure we take care of our bodies,” he said. “We had a tough weekend, with two really tough games, both mentally and physically taxing, so we have to decompress and get our minds and bodies back.”

The kickoff between the Horned Frogs and the Panthers is set for Friday at 7 p.m. at Garvey-Rosenthal Soccer Stadium. The game will also be streamed exclusively on ESPN+.