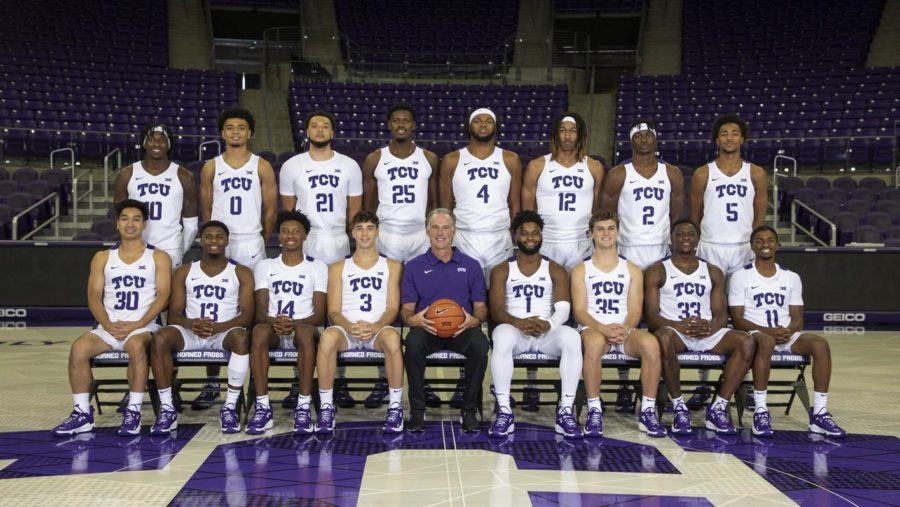 In a new era of college basketball, the TCU Horned Frogs are bringing in a program-record eight transfer players for the 2021-2022 season.

After seven players — Taryn Todd, Kevin Samuel, Jaedon LeDee, Diante Smith, Terren Frank, Kevin Easley and PJ Fuller — transferred out of the program in the offseason and veteran guard RJ Nembhard signed an NBA contract, the Frogs were in need of bodies.

“It’s a new era. It’s a new time. Now I’ve embraced it,” head coach Jamie Dixon said during Big 12 media days. “Certainly we did [get better] this summer. You just try to improve yourselves. We certainly did with the transfers.”

Entering his sixth season as head coach, Dixon got busy in the transfer portal. The Horned Frogs had no trouble filling the scholarship positions that were left vacant and brought in some top talent from all around the country.

Six of the eight transfer players brought in were consistent starters on their previous teams, and TCU will rely on these first-time Horned Frogs to come in and contribute immediately.

The ESPN consensus predictions have TCU slated to finish eighth in the Big 12 this season, but considering the only time anyone has seen this group play together was in last week’s Purple vs. White preseason scrimmage, the Frogs are as hard of a team to pin as any.

“I’m excited about our group. I mean, we have 12 good players, guys that belong in the Big 12. [We] might be the deepest group,” said Dixon.

The Frogs’ 2021 season tips off on Thursday, Nov. 11 against McNeese State at the Schollmaier Arena. Before the season gets underway, meet the players that make up this new-look TCU roster:

Possibly the most recognizable name on the list of TCU newcomers, Micah Peavy is a two-way, 6-foot-7-inch, 215-pound shooting guard that transferred from Texas Tech.

As a freshman last year, Peavy started 25 of 29 games for the Red Raiders and averaged 5.7 points, 3.1 rebounds and 1.4 assists per game. He finished the season with five double-digit scoring performances and shot 45.9% from the field.

The timing of Peavy’s transfer occurred on the same day his former coach, Chris Beard, agreed to a deal to become the next head coach of the University of Texas at Austin Longhorns. Despite not having him on his roster anymore, Beard still raves about Peavy’s talent potential:

“Micah Peavy is about all the right things, man,” said Beard in an interview with the Star Telegram. “He’s going to represent TCU well, Fort Worth well, Horned Frogs well. He’s the real deal.”

Although he is yet to break out at the collegiate level, Peavy was an important asset throughout his prep career. The 2020 TABC Class 6A Player of the Year averaged 19 points and 7.5 rebounds per game as a senior and was also named to the Jordan Brand Classic roster.

Coming out of high school, Peavy was the No. 2 ranked prospect in Texas, according to Mike Kunstadt’s Texas Hoops, and the No. 32 ranked player in the nation by ESPN’s standards.

Peavy is likely to play a vital role in the Horned Frogs 2021-2022 season. In his first unofficial appearance in a Horned Frogs uniform, Peavy scored 13 points in the Purple vs. White Scrimmage, the second most of all scorers.

Emanuel Miller is another name Horned Frog fans will need to be familiar with for the 2021-2022 basketball season.

The 6-foot-7-inch, 215-pound power forward transferred from Texas A&M after his sophomore season where he did some damage in the SEC.

Miller led the conference in field goal percentage (57.1%) while finishing second in rebounds per game (8.2), seventh in points per game (16.2) and ninth in free throw percentage (81.7%).

The Canadian-born forward could have an immediate impact on both sides of the ball for TCU. Josh Gershon of 24/7 Sports described Miller as an, “extremely versatile defender with decent size and length,” and a “gifted athlete that can be used in a variety of ways.”

Proven by his sophomore season stat line, Miller is expected to grab boards and convert free throw opportunities; both of which were weaknesses for the Frogs a year ago.

Miller has been an impact player just about everywhere he has played. Before attending A&M and starting all 30 games as a first-year, Miller was a 4-star recruit, according to ESPN, and attending Prolific Prep in California.

Damion Baugh is an extremely athletic guard that transferred from Memphis after his sophomore season.

The former 4-star recruit, according to ESPN and Rivals, started in 29 of 57 career games for the Tigers, where he led the team with 60 career steals.

Baugh averaged just 3.4 points and 1.9 assists a year ago and could serve as an excellent partner to Mike Miles Jr. in any zone defense.

In his first unofficial appearance in a TCU uniform, Baugh showcased his athleticism by winning the dunk contest at the Purple vs. White Scrimmage against Shahada Wells by dunking over Souleymane Doumbia, a nearly 7-foot tall center.

Xavier Cork is a 6-foot-9-inch, 228-pound power forward that transferred from Western Carolina after his sophomore season.

The Sulphur Springs High School product started to come into his element last season for the Catamounts. As a freshman, Cork averaged 4.1 points, 2.8 rebounds and 0.3 assists per game in 31 appearances.

Fast forward to his sophomore year, Cork led the team in rebounds and blocks while also earning conference recognition for his shooting percentage.

In Cork’s sophomore season, his averages improved to 12.1 points, 6.1 rebounds and 1.8 assists per game while leading the team and the Southern Conference in field goal percentage (64.1%). He also opened the season with 14-consecutive double-doubles.

On top of an improvement in offensive production, Cork finished the season with 37 blocks in 27 games.

Cork is an athletic, legit big man that could serve as a great replacement for Jaedon LeDee, who transferred to San Diego State after two seasons with the Horned Frogs.

The 6-foot, 180-pound Shahada Wells will be playing his senior season at guard with the Horned Frogs after an excellent career at both Tyler Junior College and the University of Texas at Arlington.

As a first-year and sophomore at TJC, Wells did it all. He was recognized as an NJCAA Division 1 First Team All-American in 2019 and was named the Region XIV Player of the Year.

Wells is a quick, versatile guard, but he was most known for his three-point shooting abilities at TJC. He finished his sophomore year with a 46.5% 3-point shooting percentage, nearly a full 10% above the national average of 37.1% in 2019, according to ncaa.com.

After paying his dues at TJC, Wells transferred to the University of Texas Arlington where he led the Mavericks in scoring with 16.8 points per game to coincide with his 3.4 rebounds and 3.8 assists per game.

His hot hand continued with the Mavs, as Wells finished his junior season with another impressive field goal percentage from deep (39.7%).

Wells will be an excellent fit to the Frogs’ “live by the three, die by the three” mentality from a year ago, but he’ll add production on the defensive end as well.

At UTA, Wells averaged over 2 steals per game and will be a nice addition to the backcourt with Miles, Peavy and Baugh.

In TCU’s Purple vs. White Scrimmage, Wells led the white team with 14 points and proved he could be an immediate impact player for the Frogs.

The 6-foot-7-inch, 225-pound forward from Butler was the final transfer player added to the Horned Frogs’ new-look roster, signing with TCU on June 30.

Coles had a short career in Indianapolis due to suffering a season-ending injury in practice after appearing in the first six games of his freshman season. In those six games, Coles averaged 6.3 points and 3.3 rebounds per game. He also shot 63.6% from the field.

Before his collegiate career, Coles attended Guyer High School, where he helped lead the Wildcats to a 27-5 record as a senior and earned Texas All-State third-team honors. He averaged 17.5 points, 8.5 rebounds and 3.5 assists per game his senior season.

Coles will be teaming up with former 2019 Nike EYBL Play teammate Mike Miles, where the pair played alongside No. 1 overall pick in the NBA draft, Cade Cunningham.

Born and raised in Africa, Souleymane Doumbia finds himself in a Horned Frog uniform after transferring from Tyler Junior College this offseason.

The 6-foot-11-inch, 235-pound true center was rated as the No. 4 JUCO player in the nation last season, according to 247Sports.

Due to his size and athleticism on the defensive side of things, Doumbia could have an immediate impact on the Horned Frogs and potentially find himself in the starting lineup.

Doumbia finished his career at Navarro with a program record of 82 blocked shots in 52 games. The big man could serve as an excellent pairing to Cork in the post.

In a roster full of new faces, the Frogs have secured a seasoned veteran in Maxwell Evans.

The 6-foot-2-inch, 200-pound guard played all four years at Vanderbilt and will be exercising his extra year of eligibility granted to all Division 1 student-athletes by the NCAA due to COVID-19.

Having four years of experience in the SEC, making 67 starts could go a long way for the Frogs in terms of leadership.

At Vanderbilt, Evans had the best season of his career last year. He averaged 8.5 points and 3.2 rebounds in 25.8 minutes per game and finished third on the team in assists (43), third in steals (24) and fourth in scoring.

Based on his time with the Commodores, Evans could serve as a ball-handler and defensive role player for the Horned Frogs. If he plays anything as he did in high school, Evans could do it all for the Frogs.

In his final season at Bellaire High School in Bellaire, TX, Evans averaged 32.7 points, 7.1 rebounds and 6.5 assists per game. On defense, he averaged 3.2 steals and 2 blocks per game.

The starting lineup for the season opener for TCU against McNeese State has yet to be announced, but fans can expect a completely new look compared to last year. Considering only three players on the current roster made five or more starts last season, Dixon told the media on Tuesday that the starting five are subject to change before Big 12 play begins.

Horned Frog fans will have their first chance to see the new-look basketball team in action on Thursday, as TCU hosts McNeese State at home at 7 p.m.