Postseason fireworks: No. 4 TCU advances to second round of NCAA tournament 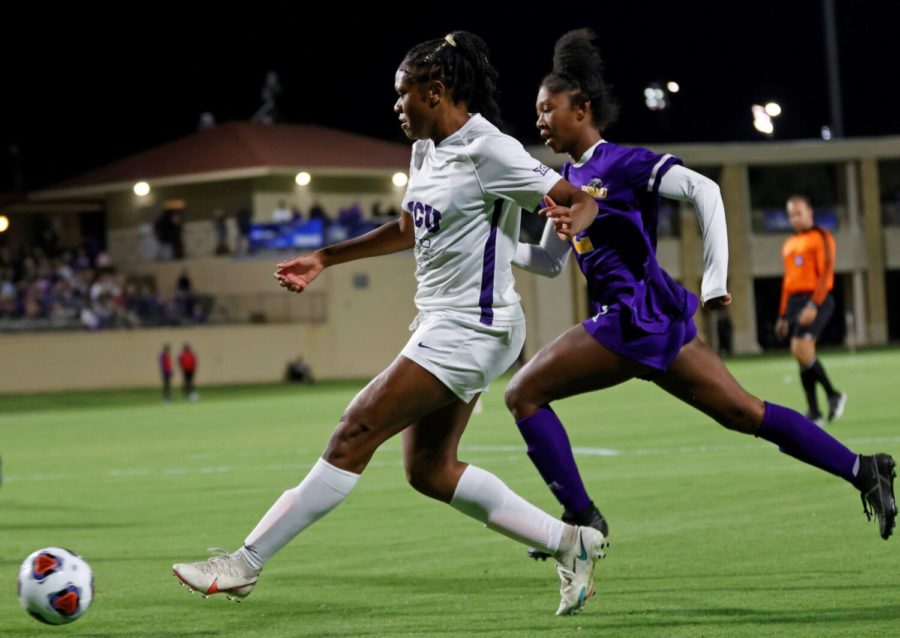 Senior defender Brandi Peterson crosses the ball in one of her four assists versus Prairie View A&M in the first round matchup of the NCAA tournament on Nov. 12, 2021. (Photo courtesy of: goFrogs.com)

No. 4 TCU handily took care of its first-round matchup in the NCAA Tournament with an 8-0 victory at home against Prairie View A&M on Friday night.

Junior midfielder Gracie Brian was the star of the night with three goals, producing the first hat trick of her career.

In the eighth and 24th minutes, Brian scored the first two goals for the Horned Frogs that set the tone for the avalanche that would follow. The first one came off a tap-in, and she scored the second after she deflected clearance towards the goal.

She would complement her performance with another goal and an assist in the second half.

Senior striker Messiah Bright scored the fourth goal of the night and her 14th of the season. With it, Bright broke the school record for points with 86, one over previous record holder Jordan Calhoun.

“The game is slowing down for her [Bright],” Bell said. “She is able to do things at a really high level and make it look easy.”

Bright also tied Calhoun for most goals all-time as a Horned Frog with 36.

In between Brian and Bright earning accolades, first-year midfielder Oli Pena scored a third goal of the game with a powerful strike just as she entered the box.

First-year forwards Lauren Memoly and Skylar Heinrich scored the sixth and seventh goals in the 66th and 76th minute, respectively.

To complete the thrashing, a cross by Heinrich in the 82nd minute found the back of the net after the Panther defense cleared the ball into its own goal.

Senior left-back Brandi Peterson also had a productive evening, assisting on four goals for the first time in her career.

The Frogs outshot the Panthers 45-3, showcasing the complete dominance for the home side.

“We knew that it was gonna be a challenge for them with where we are and our talent level, and where they are and their talent level,” Bell said. “We knew we were gonna have the ball a lot.”

Since they had the game under control, Bell went 22 players deep and opted to rest his starters for several portions of the match, with none of them breaking the 65-minute mark.

In the second round, TCU will face Princeton, who moved forward after a 2-0 victory against Vermont. The matchup will be played Friday with the time and location yet to be determined. The game will be streamed on NCAA.com.