TCU too cold for Huskies in women’s basketball opener 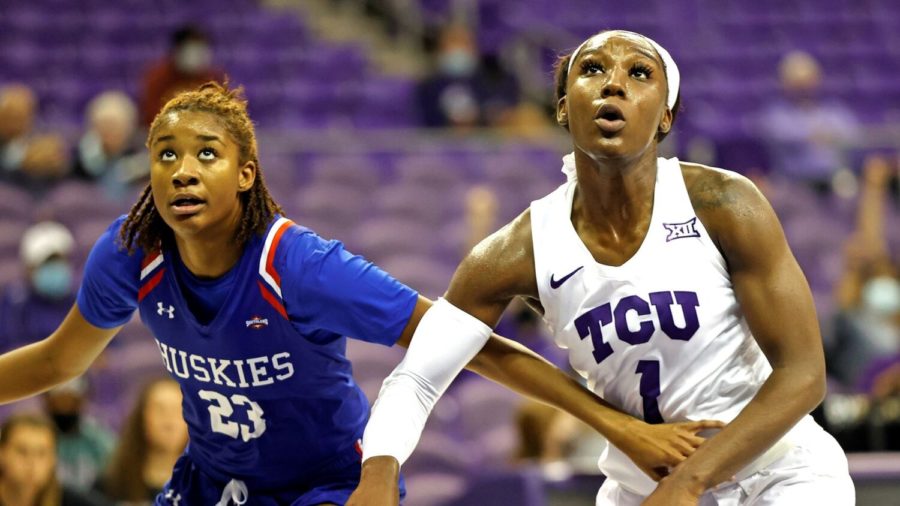 TCU guard Aahliyah Jackson (1) plays over 30 minutes in the Frogs victory of the HBU Huskies. (Courtesy of gofrogs.com)

The Frogs’ All-Big 12 guard tallied a double-double, leading the team with both 16 points and 10 rebounds. Her teammates didn’t disappoint either, as three other Frogs racked up double-digit scorelines to round off a 78-48 clinic.

“I’m really proud of our team,” said coach Raegan Pebley post-game to media. “We worked really really hard defensively. A lot of practice lately has been about the defensive end of the floor and simplifying some things offensively. I think we did a lot of the things that we practiced. Shared scoring was another thing that we wanted. [We had] four players in double figures. We hit that mark.”

It wasn’t all a clinic. The Frogs finished the first period with a slight 13-12 advantage above the Huskies, shooting an abysmal 21.7% from the field in their first minutes of the season. About 9 minutes into the second, the team brushed off the cobwebs and exploded for 26 in the period with a field goal percentage of 52.9%.

TCU brought a 39-23 lead into the locker room at halftime and couldn’t seem to find the brakes when they came back. The Huskies found themselves in a precarious position by the end of the third period, down 26, as it started to become clear who the goliath was.

It's good to be back! The Frogs open the 2021-22 campaign with a 78-48 win over Houston Baptist!#GoFrogs 😈🐸 pic.twitter.com/qgpFmsByUO

TCU was taking advantage of HBU because of its rebounding and defensive efforts.

The Frogs took the ball away from the Huskies 14 times, the most for TCU since last years’ season opener. The Frogs also out-rebounded the Huskies 58-35 and dominated them on the offensive boards 21-8.

Behind Heard, graduate guard Aaliyah Jackson and senior center Kayla Mokwuah tied for second on the team in scoring. Jackson contributed 12 points for the Frogs, hitting 4-of-8 from the field, including two three-pointers. Mokwuah came off the bench and had her highest scoring games as a Frog with 12 points.

Arizona Wildcats transfer Tara Manumaleuga tied her career-high in scoring, putting up nine points off the bench that included two three-pointers in her Horned Frogs debut. The TCU junior guard made an impact on the defensive side, stealing the ball three times. Also making her Frogs debut was forward Akako Adika, who raked in nine rebounds and also stole the ball three times.

The 30-point margin of victory was the largest in a season-opener for TCU women’s basketball since its 48-point win over Incarnate Word in the 2016 season-opening contest.

The Lady Frogs will travel to Louisiana next as it takes on Tulane in its next matchup Nov. 17 at 6 p.m. at Fogelman Arena in Devlin Fieldhouse. Follow the game on KTCU.