Playtime’s over: TCU football gets reality check in Stillwater 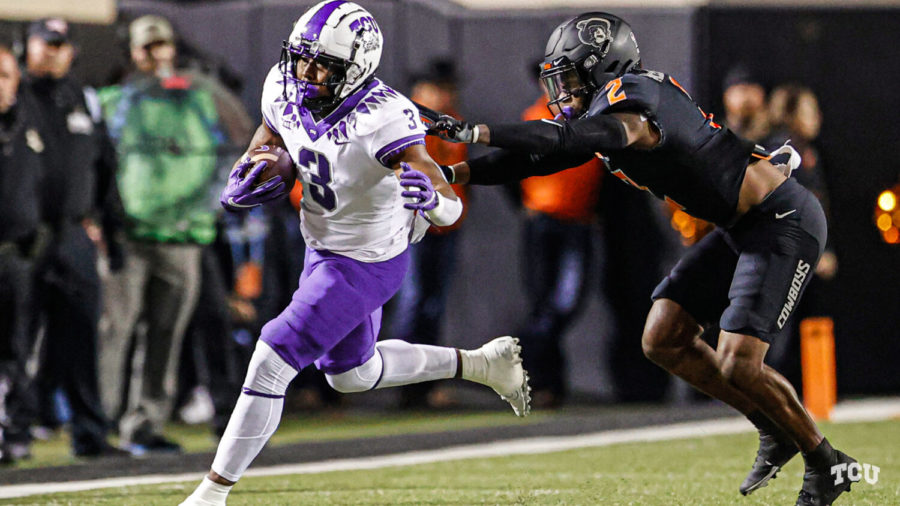 The term “flash in the pan” is used to describe “a thing or person whose sudden but brief success is not repeated or repeatable.”

While many people wanted to see TCU’s win over No. 12 Baylor as a turning point for the season, Saturday night at Boone Pickens Stadium in Stillwater, Oklahoma made it evident that last week’s upset was, indeed, a flash in the pan.

On the same night that Oklahoma State inducted its beloved Barry Sanders into its Ring of Honor, the Frogs got ran all over by the Pokes, falling 63-17 after giving up 673 yards of total offense.

“They out physicaled us, outplayed us, outcoached us,” interim head coach Jerry Kill said. “There’s really not a lot to say when you get beat like that and I’ve been in the business for a long time.”

The 46-point loss was TCU’s worst since falling 59-3 to No. 3 Texas A&M in 1993. Not only were zero players on the Frogs’ roster alive when that game was played but TCU quarterback coach Kenny Hill was not even born until the following year.

Playing for barely more than a half, Oklahoma State running back Jaylen Warren almost looked like Sanders, rushing for 113 yards and three scores on just 17 carries (6.6 yards per carry).

“I feel they ran the ball very well. They ran the ball hard and have some good backs,” TCU defensive end Dylan Horton said. “As a defense, we need to tackle, tackle legs, that’s something we need to emphasize. We need to work on it, but they did a good job today.”

The reigning Big 12 Player of the Week, starting quarterback Chandler Morris, looked like a deer in the headlights for most of the game, going just 11-for-20 with 103 yards.

The redshirt freshman’s offensive line did little to help him out, giving up seven sacks.

As a team, TCU collected just 273 yards of offense, with running back Emari Demercado as a lone bright spot with a career-high 90 rushing yards (6.4 yards per carry) and a touchdown.

“They’re definitely sound on defense. As far as tendencies, like showing blitzes, they’re really good as disguising stuff,” Demercado said of Oklahoma State. “I mean, they’re a pretty good defense, but I feel like we still could’ve made plays. It’s just, on our part, we could’ve executed better.”

In general, TCU did very little to help itself out as a team, committing 11 penalties for 79 yards. Oklahoma State was called for just one penalty in the contest.

The lone period of momentum the Frogs held in the game came on the opening drive. The Pokes starting to get rhythm offensively, but cornerback Tre Tomlinson forced a fumble to get the TCU offense onto the field.

From there, the wheels began to fall off for TCU. The Frogs failed to convert on fourth down deep in enemy territory, and the Pokes would score touchdowns on seven of their next eight drives.

“We’ve been depleted. I don’t make excuses, but we just don’t have anybody left right now,” Kill said. “We got some young guys playing and some guys trying to play through injury. We’ve just been beat up.”

A 44-yard field goal would be TCU’s lone score in the first three quarters, with Oklahoma State leading 49-3 with under 13 minutes remaining in the game.

With the game all but over, the Frogs took Morris out and inserted first-year quarterback Sam Jackson. The former four-star recruit hit receiver Taye Barber on a 62-yard bomb on his first throw, with Demercado scoring from 13 yards out on the next play.

Thanks to that drive, Barber led the game with 74 receiving yards. Oklahoma State quarterback Spencer Sanders had thrown for 235 yards, but no more than 61 had gone to one pass catcher (Brennan Presley).

On the second play of the Pokes’ ensuing drive, a dropped handoff led to defensive end Colt Ellison’s 28-yard fumble return for a touchdown to produce TCU’s final points of the night.

Oklahoma State attempted to run the clock out from there, but the Frogs’ run defense continued to crumble, giving up touchdown runs of 20 yards and 63 yards to end the game.

With the loss, TCU must win its final two regular season games to reach bowl eligibility. Up next, the Frogs take on Kansas at home this Saturday. Kickoff is scheduled for 3 p.m.

“Obviously, it sucks, but it happened,” Demercado said. “We have to look forward on to Kansas and then Iowa State after that. Like there’s still two more games to be played.”