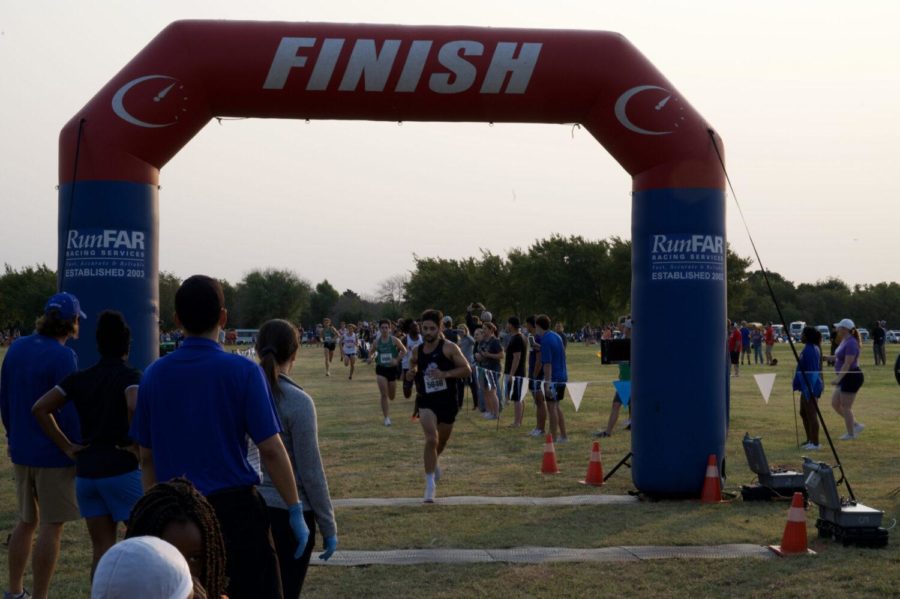 Lakelin Conrad began running in middle school in pursuit of cute girls, curing boredom and getting out of house chores.

Now, after four years of running for TCU, he is closing in on his final track and field season as a Horned Frog.

Conrad has always been at the top of the pack on the TCU cross country team, finishing second for TCU as a first-year student at conference with a then 8k personal record (PR) of 25:38. He finished second for TCU the year after, before leading the team in 2020.

Looking back on his years here at TCU, Conrad talked about his favorite races. His favorite collegiate race was his Big 12 Cross Country Championship race as a first-year student. However, out of all of his races, he recounted his state championships race from his senior year in high school.

“I was behind in the race [1600 meters] at state and came back and won. I didn’t know if I could do it and it was super hot, but I did it. I felt like I was dead at the end, but it felt really good and it was really fun,” Conrad said.

Conrad played tennis and basketball as well in high school but chose to run in the end. He explained that he’s created a great network of friends from his opportunity to run at TCU. While running takes up lots of time, he is appreciative that he has something to focus on besides schoolwork.

This season, the team has gone through a long break between meets, which many consider “hell month,” because of the grueling, non-stop workout schedule. Usually, teams taper when preparing for a meet. This means they lower their mileage or do less-intense workouts so their legs aren’t too tired before competing. Not competing for so long is fairly unique to the TCU program. Conrad explained some concerns that can come with this process.

“It is kinda hard because you want to get good training in, but then school and other things can start to take priority because you feel like your next meet is so far away. But, you just have to take it one day at a time,” Conrad said.

With practice being in the morning, Conrad said it feels a little easier to balance schoolwork and training. He often sets aside time for homework after his classes. However, when he moves to track season next semester it becomes more difficult. In track season, the team will do weight training in the morning and do their running workouts in the afternoon.

On the longest days, Conrad said practices finish around 10 a.m. Conrad usually gets up at around 5:20 a.m.

“After getting water and getting ready for practice, we head over and warm up around 5:45 and then get our run started around 6:30. My bedtime will vary from 9-11 p.m. depending on how much schoolwork I have […] or how bad I procrastinate,” Conrad said.

An average workout week looks like two hard workouts throughout the week and then a long run. They do easy runs in between these hard days. Long runs usually consist of longer running that helps the legs prepare for endurance for the races when they get tired. The harder workouts help build speed and strength in the legs for the middle and ends of the race.

Conrad’s favorite workout was a 4×1 mile workout with 4×400 meters at the end where he finished his last 400 in 57 seconds. This was exciting for him because it was close to his competitive personal record. Being able to hit that in practice, especially at the end of the workout, is considered by most an impressive feat. His long runs have been exciting for him as well, as his favorite run was running 16 miles at a blistering pace of 5:54/mile. His longest run to date was a 17-mile long run he did earlier this season.

The easy runs in between act as recovery so your legs don’t get stagnant between the harder days, but also don’t get overworked. Two days out of the week the runners work on weight training and then have an optional treatment session that helps the runners recover.

“There’s cold tubs, hot tubs, massage guns. We do a lot of recovery, which is a big part of the sport. Staying healthy is half the game,” Conrad said.

Conrad has been between two different coaches through his tenure at TCU. Conrad talked about how energetic Coach Morgan was and the passion she shows. He also talked about her constant dancing and singing that keeps good vibes going during the season. One of the big differences was how loud Coach Morgan is during the races.

“When we’re doing stuff on the track, she likes to yell. I could never hear a coach when I was running until I had Coach Morgan because she will scream at the top of her lungs,” Conrad said.

After going through the COVID-19 pandemic, it has been hard for many athletes to bond outside of practice. Conrad said they are pretty restricted when it comes to what they can do outside of school. This has led to some of his favorite hobbies like watching Netflix and playing online chess. Throughout his years at TCU, some of his favorite memories have been joining the Spikeball club and going out with friends to do anything from going to Billy Bob’s to walking to Kroger.

Despite COVID-19 restrictions, the bonds between Conrad and his teammates have grown strong, he said, touching on a great team atmosphere and the constant support that they show each other.

“There’s a really good team atmosphere, we’ll always check in on each other after workouts and see how we felt. At the end of workouts, people always keep cheering on those still running and we’re always giving high fives at the end,” Conrad said.

Looking forward to track season, Conrad hopes to hit the low four-minute mark in the mile. He considers himself a mile runner, but hopes to dabble in the 5k because of Coach Morgan’s workout style. In the 5k, he’s aiming to run under 14 minutes and 30 seconds.

Just recently, Conrad finished up his final cross country season by competing in the Big 12 Cross Country Championships and NCAA Cross Country Regional Championships. At Big 12s, he fought through heavy wind and the large rolling hills of Stillwater, Oklahoma to finish 46th with a time of 26:37 in the 8k. At NCAA Regionals, he was one of two Horned Frogs on the men’s side to compete. He finished the 10k race 62nd overall in a time of 32:58, among some of the best runners in the nation.

TCU has never had a standout distance-running program, but it’s runners like Conrad who give hope for a bright future. Conrad has shown that TCU means business, shaping the team atmosphere and finishing near the top pack in competitive races.