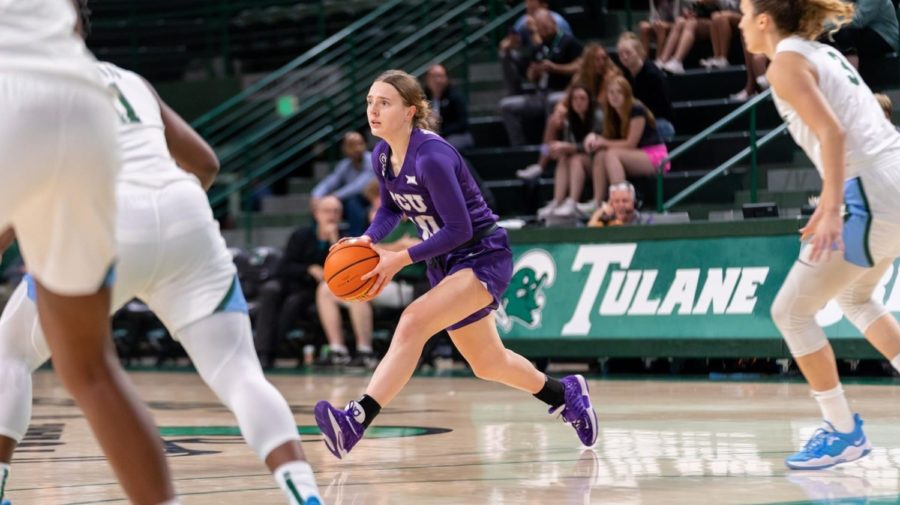 First-year Paige Bradley (10) runs the point in her college basketball debut against Tulane on Nov. 17, 2021. (Courtesy of gofrogs.com)

In hostile territory, the TCU women’s basketball (1-1) fought from a double-digit deficit in the first half to force double-overtime action, but they couldn’t hold off the talented Green Wave (3-0) on Wednesday night and fell to 1-1.

Going into double overtime, the Horned Frogs were on fire and looking to keep their momentum, as they had outscored the Green Wave 47-37 over the last three periods.

Tulane had a different idea in mind, though. The Green Wave quickly scored twice from downtown in double overtime, forcing the Frogs into a six-point deficit that made the game one of catch-up for the Horned Frogs.

TCU would refuse to go away, as super senior guard Lauren Heard and sophomore guard Aja Holmes each scored to pull the Frogs within two.

The game took a turn when Tulane players started going to the free-throw line, clearly heeding the words of high school coaches everywhere to ‘practice your fundamentals.’ They cashed in eight of 10 free-throws in the final minutes to stifle the Horned Frogs’ momentum and come out with the win.

The thrilling matchup concluded with a string of free throws, a few empty possessions for TCU and a final score of 78-88 in double overtime, advantage Tulane.

The Frogs’ run was a good one but not good enough to seal the deal.

Heard nearly earned herself a second consecutive double-double Wednesday night. Heard had a season-high and team-high 23 points and was second on the team in rebounds for nine on the night.

In the fourth quarter, Heard put the team on her back, going for eight points in 43 seconds on a run that shook Tulane. With one second left in regulation, down 65-66, senior forward Yummy Morris had an opportunity for TCU to take the lead. Morris hit the first, tying the game, but missed the second, causing a 66-66 tie that led to the first overtime.

The entire bench support, including Morris, was outstanding for the Frogs throughout, scoring 46 total points compared to 10 bench points from the Green Wave. Off the bench, junior guard Tavy Diggs put together a double-double with 15 points and 11 rebounds. Aja Holmes delivered 13 points and Morris, seven.

First-year guard Paige Bradley, who was out last game because of a concussion, made her first collegiate entrance by hitting a three and a pair of free throws.

TCU coaches weren’t afraid to put a lot of trust into their bench players, some of who ended up playing more minutes than the starters. It might’ve been a sign that the Horned Frogs, full of new faces, were still testing out their starting lineups in their second game of the season.

With the depth of the Horned Frogs looking strong, the Frogs had more than a chance to leave New Orleans with a dub, but failed to do so against a strong Tulane team.

The outcome could’ve looked different if they were able to contain Tulane on the boards. The rebounding advantage was plus 15 for the Green Wave, and three of their players earned double-doubles. TCU looked like a mirror of itself compared to its last game against Houston Baptist when the Frogs raked in 23 more rebounds than the Huskies.

The Frogs also ran into a problem with breakout redshirt-freshman Moon Ursin. The Tulane guard made a name for herself Wednesday, going off for a double-double and a suffocating 10-17 shooting extravaganza worth 28 points.

The game was one for the books. TCU hadn’t been in a double-overtime game since a 2010 loss to SMU. Still, the thriller last night was not one the Lady Frogs want to repeat. There was a lot for them to learn from 50 minutes of game time, despite it coming down to a few free throws in the end.

TCU women’s basketball returns to Schollmaier Arena to take on the University of North Carolina on Sunday, Nov. 21 at 3:30 p.m. as part of the Maggie Dixon Classic. Stream the game on Big 12 Now on ESPN+ or follow the game with KTCU via GoFrogs.com.