TCU football looks to bounce back against Kansas on Senior Day 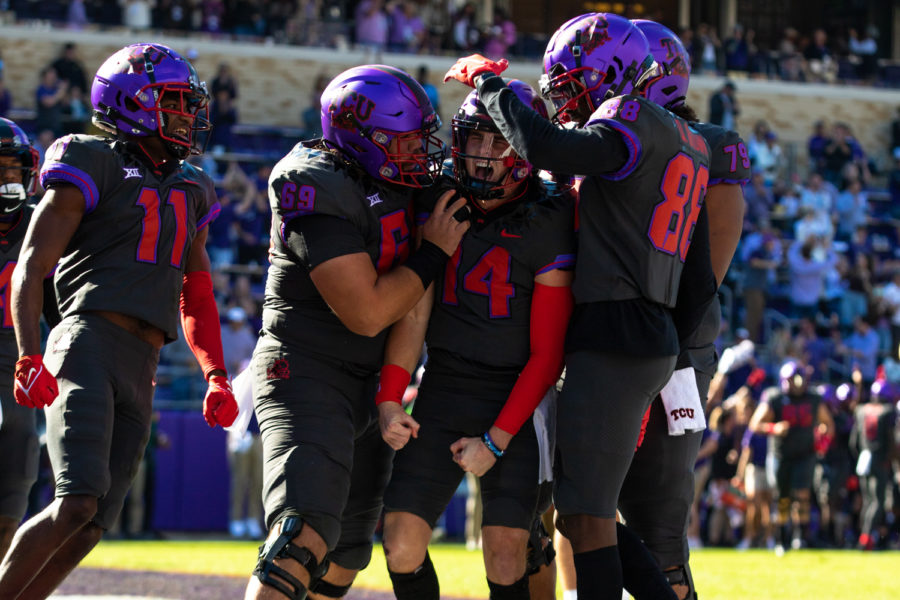 Despite a loss to No. 9 Oklahoma State last weekend, TCU still has an opportunity to make a bowl game this season. Teams with a 6-6 record are bowl eligible, meaning TCU must win both of its final two matchups.

Saturday is Senior Day for the Frogs, and former head coach Gary Patterson will make an appearance at the tunnel pregame to send the TCU seniors off.

The Kansas Jayhawks prepare to travel to Fort Worth after the program’s first conference win on the road since 2008. Sophomore quarterback Jalon Daniels and the Jayhawks upset Texas 57-56 in overtime, scoring, by far, the most points they’ve scored this season.

Kansas hasn’t won multiple conference games since 2008, but earlier this season, Kansas led Oklahoma 10-0 at halftime before ultimately losing 35-24. TCU is 8-1 against the Jayhawks since joining the Big 12, with its lone loss coming in 2018.

Here’s a look at what to expect from the Jayhawks this Saturday:

Neither team has given a definite answer as to who will start at quarterback on Saturday.

Kansas’ Jalon Daniels earned the start against Texas after injuries to former starter Jason Bean and backup Miles Kendrick. Against Texas, Daniels was 21-of-30 passing for 202 yards and four touchdowns.

When asked if Daniels would start against the Frogs during a press conference on Tuesday, Kansas head coach Lance Leipold smirked and said “it could be that way.”

The Kansas offense averages 19.3 points per game, the worst in the Big 12. No offense can be taken lightly for TCU, who gives up the ninth-most points and ninth-most rushing yards in the Big 12.

Jayhawks running back Devin Neal is a player to watch this Saturday. Neal scored 4 touchdowns on 169 total yards in the offensive explosion against Texas last weekend, his third game with 100 yards rushing this season.

On the defensive side, Kansas gives up 44.1 points per game, the most in the conference. Defensive end Kyron Johnson is the best Jayhawk pass rusher with 5.5 sacks this season, two of which came against Texas.

Kansas’ defense allows opposing offenses to convert 57.5% of third downs, by far the worst in the Big 12. TCU ranks ninth at 47.2%. Both defenses struggle to get off the field, so expect to see a lot of offense on Saturday.

As usual, keep an eye on the running backs in this matchup. Kendre Miller is eyeing a return (practiced Tuesday) for TCU and Neal is looking to build on his best game of the season.

The Jayhawks will take on the Frogs at 3 p.m. at Amon G. Carter Stadium, and will be televised on the Big 12 Network.