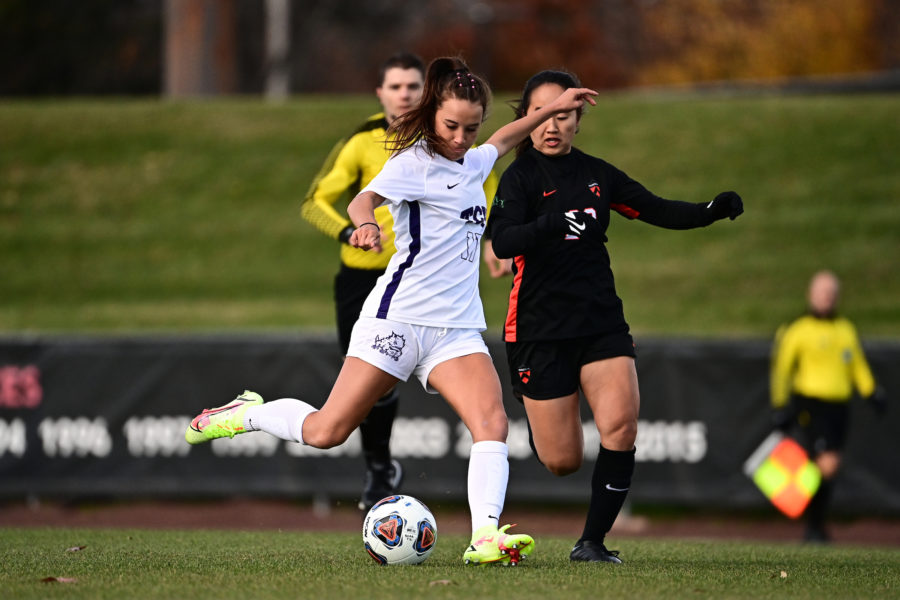 Junior midfielder Gracie Brian in a 3-2 victory against Princeton in the second round of NCAA Tournament on Friday, Nov. 19. (Photo courtesy of goFrogs.com)

Behind a record-breaking performance from Messiah Bright, No. 4 TCU soccer advanced to the Sweet 16 on Friday with a 3-2 come-from-behind victory over Princeton in double overtime.

Bright scored three goals in the contest, moving her past Jordan Calhoun for first all-time in goals scored in TCU history.

The Horned Frogs had tied the game with less than 2 minutes left in regulation to force overtime.

“We’ve got a group of warriors that wherever we go in the country, we can compete with anybody,” head coach Eric Bell said. “Even if we go down, we are resilient enough to figure out a way to score goals and win games.”

In the 89th minute, first-year forward Camryn Lancaster carried the ball from the midfield into the final third and put in a perfectly weighted pass in between the Princeton center-backs for Bright to score her second goal of the night.

With 5 minutes remaining in the second overtime period, Lancaster then assisted Bright again, who came in from the left and cut inside for a strong game-winning strike to the near post.

“Messiah [Bright] is incredible. It was a fantastic game for her,” Bell said. “Scoring three goals in a national tournament game is unbelievable. Camryn [Lancaster] had a fantastic game as well and so did many others in allowing us to do what we did tonight.”

During the first hour of the match, TCU had trouble circulating the ball, committing multiple turnovers as a result of Princeton’s pressure. However, Bell made adjustments that allowed the Horned Frogs to control the game when it mattered most.

The Tigers generated more opportunities in the first half, forcing sophomore goalkeeper Lauren Kellett to make some difficult saves.

TCU fell behind after some defensive mistakes allowed Princeton to take the lead on two different occasions.

An unforced error by Kellett allowed the Tigers to open up the scoreline. The goalkeeper allowed first-year midfielder Lily Bryant’s left-footed shot to the near post to sneak under her arm and give Princeton the lead in the 36th minute.

The Tigers held on to the lead until the 70th minute.

Junior midfielder Michelle Slater recovered a ball in the midfield, and swiftly distributed it to junior midfielder Gracie Brian. Brian sent a through ball into the box to Lancaster, who pulled the ball back to the top of the area for Bright. The senior eliminated her defender with a great first touch before striking to tie the game.

The Tigers responded by retaking the lead just two minutes later. Senior forward Gabi Juarez mishit a shot from distance, but the ball ended in the box, where sophomore forward Jen Estes anticipated senior defender Chaylyn Hubbard at the penalty spot to redirect the ball into the net.

Despite their unsteady start, the Frogs managed to outshoot Princeton 17-11, including 5-0 in both overtime periods.

“We believe,” Bell said. “We’ve shown that we can play soccer with the best teams. When time is running out, we still can figure out a way, show composure and poise in those moments and find ways to score goals.”

Next, TCU will face the winner of the matchup between Rutgers and Saint Louis. Kickoff is scheduled for Sunday at noon. The game will be played in Piscataway, NJ and streamed on Big Ten Plus.