Still alive: TCU football slips by Kansas to preserve hope of a postseason 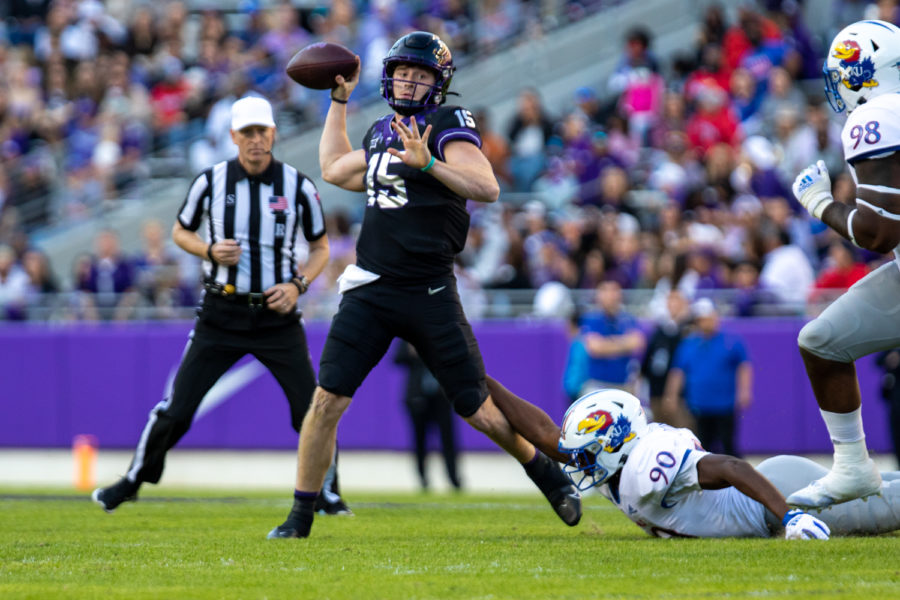 “We won on Senior Day. I think that’s something special these kids won’t ever forget.”

With everything that has gone wrong for TCU football this year, including struggling against a two-win Kansas team, interim head coach Jerry Kill chose to take a glass-half-full perspective in his postgame press conference on Saturday evening.

Thanks to a 25-yard field goal by kicker Griffin Kell with six seconds remaining in regulation, the Frogs had just defeated the Jayhawks 31-28 in their final home game of the year to keep their hopes of a postseason alive.

Four years ago, the thought of losing to Kansas in football would have been an out-of-body experience for TCU, but following a devastating loss in Lawrence in 2018 and a 4-6 start to the 2021 season, no game felt secure the Frogs until the final whistle blew.

Because of that, even the six seconds remaining for Kansas were enough to make Kill nervous, as he watched the Jayhawks lateral the kickoff around until a Frog made the game-ending tackle.

Though it had be Kell’s leg that landed the final blow, it was the grit of TCU’s former starting quarterback that earned them the win. Playing in the place of injured quarterback Chandler Morris, Max Duggan threw for 166 yards and ran for 74 yards and a touchdown, doing just enough to get the Frogs back in the win column.

All but eight of Duggan’s rushing yards had come in the second half alone, with his strong 42-yard run followed by a gutsy quarterback sneak on 4th-and-1 giving TCU their first lead of the game in almost two quarters of play with 6:55 left in the third quarter.

On their next drive, Duggan led the Frogs on a 12-play, 99-yard drive capped by a one-yard score by running back Emari Demercado to give TCU a commanding 28-14 lead with 11:43 left in the game.

After playing in dominant fashion since the second half began, the Frogs’ then fell apart defensively, giving up two straight touchdown drives by the Jayhawks to tie the score at 28 with just under five minutes remaining.

The second score had come on a pass from Kansas quarterback Jalon Daniels to walk-on tight end Jared Casey, who caught the game-winning two-point conversion for the Jayhawks a week ago against Texas.

Previously unknown to the world of sports, Casey entering the TCU game with national fame after winning the game for Kansas and then signing an NIL deal with Applebee’s earlier this week.

Needing a win to stay bowl-eligible, the Frogs then used 14 plays (10 of them rushing) to milk nearly the rest of the time remaining and set Kell up for his game-winning boot.

On his Senior Day, Demercado had take a carry on seven of those 10 rushing plays himself, gaining 35 of his 89 yards on the final drive alone to keep victory in sight for TCU.

TCU totaled 326 yards on the ground in the game. Returning from injury, running back Kendre Miller had joined Duggan and Demercado in their effectiveness, recording 112 yards and a touchdown on just 12 carries.

In contrast, Kansas had totaled just 124 yards rushing on the day.

“It’s been an emphasis for us the past couple of weeks,” defensive lineman Corey Bethley said about stopping the run. “Sometimes, we were letting [running] backs get out. We made a real emphasis this week in practice on tackling and stopping the run.” 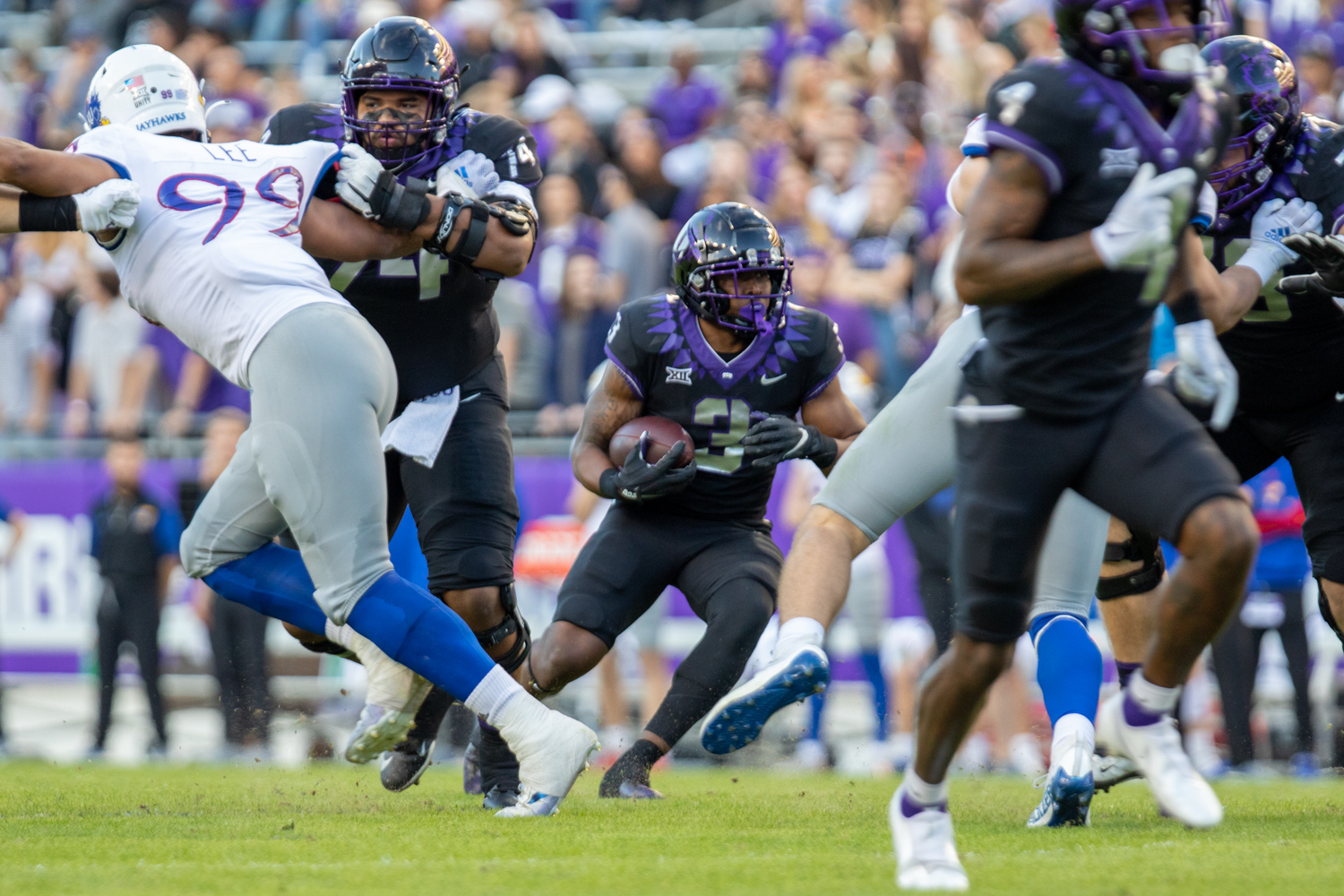 The Frogs’ success late in the game had not been the case in the first half. After Kansas went three-and-out on their first drive, wide receiver Derius Davis fumbled the punt to give the ball right back to the Jayhawks.

Once TCU got the ball back, Davis did explode to the right side of the field for a 43-yard rushing touchdown off of a jet sweep, but it was all Kansas for the rest of the half.

Along with Davis’ fumble, Duggan had thrown an interception in the end zone late in the second quarter, contributing to TCU’s 0-2 mark in the red zone after two quarters.

From there, TCU out-gained Kansas 300-168 in total yards of offense to get the win and prevent the Jayhawks from their first Big 12 win streak in over a decade.

After his fumble, Davis had all but taken over the game, recording six catches, 103 yards receiving, 52 yards rushing and a rushing touchdown.

Defensively, linebacker Dee Winters and cornerback Tre Tomlinson had led the way for TCU, combining for 14 tackles and three passes defended, including Winters’ second interception of the year.

With their backs against the wall, TCU will now head to Ames, Iowa, with a chance to play in their first bowl game since 2018. Kickoff for the Frogs against Iowa State is scheduled for Friday, Nov. 26 at 3:30 p.m.