No. 4 TCU loses in penalty kicks to No. 1 Rutgers, wraps up another historic season 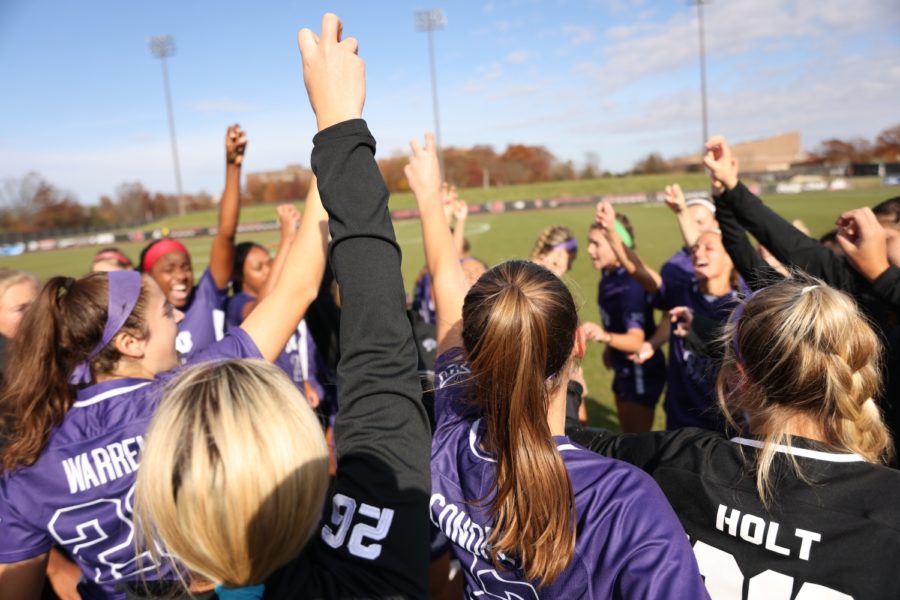 No. 4 TCU in their huddle after their loss to No. 1 Rutgers in the Sweet Sixteen of the NCAA Tournament on Nov. 21, 2021. (Photo courtesy of GoFrogs.com)

Following a 1-1 draw after double overtime, No. 4 TCU fell to No. 1 Rutgers 5-4 after seven rounds of penalty kicks in the Sweet 16 to see their season end.

Though the Horned Frogs were unable to top last season’s Elite Eight performance, they finish their season with a conference sweep for the first time in school history and a record-breaking 19 victories.

Both teams made their first four penalties, taking the shootout to sudden death.

“I don’t think the soccer gods were with us today,” head coach Eric Bell said. “I thought we did a really good job of creating a lot of opportunities for our group. We had the ball for the lion’s share of the game. It’s unfortunate that we weren’t able to find a second goal.”

The Horned Frogs trailed for most of the game before finding the equalizer in the 85th minute. First-year forward Camryn Lancaster received a pass with her back to the goal and drove from 40 yards out. As she ventured into the box, Lancaster tied the game with a left-footed shot.

This was after senior forward Amirah Ali found space on the right side of the box and scored with a powerful strike in the 18th minute.

In overtime, TCU was mostly on the ball, but the goalposts denied both teams the golden goal.

In the 98th minute, Collins curled the ball off a corner and Winebrenner hit the crossbar with a header.

The Scarlet Knights also had a chance to win it in the 109th minute when sophomore midfielder Becci Fluchel tried her luck from 35 yards out, but struck the same post that stopped the Horned Frogs in the first overtime.

After the opening goal, Rutgers took a step back, gave TCU the initiative and waited for opportunities on the counter. The Horned Frogs took advantage of that and locked the Scarlet Knights in their own half for most of the game, outshooting them 21-12.

“I thought we dominated large portions of the game where we were really, really good,” Bell said. “We gave up a goal on a counter attack in the first half, but other than that they didn’t create a whole lot after that as far as their chances were concerned.”

Before Lancaster’s goal, TCU had multiple chances to tie the game. Junior forward Skylar Heinrich had a double opportunity to tie the game in the 40th minute.

With a run in between defenders, she took a shot that was initially saved. The rebound bounced back to Heinrich who struck again for it to be saved on the goal line by senior defender Gabby Provenzano.

In the 76th minute, senior Messiah Bright had a good look after a combination of first touches just outside the area that left her in front of goal. First-year defender Emily Mason stepped in again and blocked the shot last minute to keep the Frogs scoreless for the time being.

With the win, Rutgers moves on to the Elite Eight.

“I’m really proud of our group and what they were able to do throughout the course of the season,” Bell said. “I’m really proud of our seniors for doing what they did, coming to TCU in 2018 when we were still trying to build our brand and get us to a point where we are recognized as a nationally prominent program. Our group represented TCU and Fort Worth very well. The future is still bright.”