No more chances: TCU football to miss postseason after getting blown out in Ames 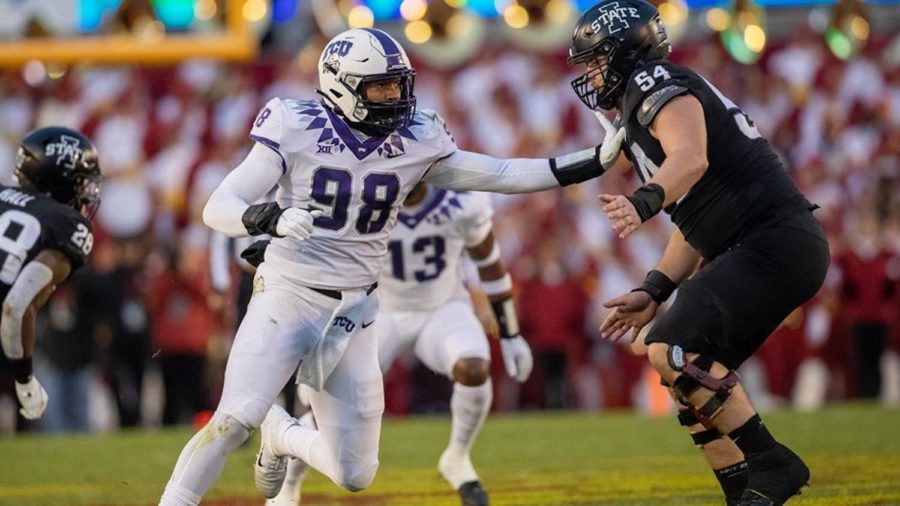 Midway through the second quarter on Friday afternoon, with the Frogs trailing 10-0 to the Cyclones in Ames, Iowa, ESPN released news that SMU’s Sonny Dykes would officially be Gary Patterson’s successor as head coach of TCU football.

The news is still yet to be confirmed by TCU, but the moment has almost signified the ending of the 2021 season and the beginning of a new era of Horned Frog football.

Well, that moment might as well have been the end of the game for TCU, as it would go on to get blown out 48-14 by Iowa State and see its season end without a bowl game for the second time in three years.

In the 11 games the Frogs played against FBS opponents this year, they got out-scored 416-99, including four losses of 19 or more points and two losses of 34 or more points.

The 2020 Big 12 player of the year, running back Breece Hall, produced a gem in what will likely be his last home game with the Cyclones, totaling a career-high 242 yards and three touchdowns on the ground. The junior added 39 yards and another score receiving.

TCU did not have any more success defending against the pass, as quarterback Brock Purdy went 21-for-30 for 262 yards and two touchdowns on his Senior Day.

The TCU defense looked more than capable on their first two drives, holding Iowa State to a field goal and a punt, respectively, but the wheels began to fall off from there.

Surprisingly, it was not Hall or Purdy that went for TCU blood first, as backup running back Jirehl Brock went basically untouched up the middle for a 40-yard score to put the Cyclones up 10-0 early.

Following a TCU turnover on downs on its next drive, Hall then added to the Frogs’ deficit with an explosive 39-yard touchdown run of his own.

Finally, the Frogs got on the board on their last drive before halftime, as Duggan led a six-play, 75-yard drive capped by a 47-yard touchdown pass to receiver Blair Conwright.

Any momentum that TCU gained with the touchdown screeched to a halt after halftime. Iowa State would go on to score on all five of their drives in the second half, highlighted by an 80-yard touchdown run by Hall to put the Frogs down by 20 to start the fourth quarter.

That drive had started for the Cyclones because of an interception thrown by Duggan on a 4th-and-2 from the Iowa State 12-yard line.

The one positive for the Frogs in the second half came amid the Cyclones’ scoring frenzy, as Duggan hit defensive lineman Tyler Guyton, who was lined up as an eligible receiver, on a six-yard pass for his first career touchdown.

Five of TCU’s 11 drives in the game had resulted in punts, with three others ending in turnovers (two turnovers on downs, one interception).

Duggan finished the contest 15-for-26 with 216 yards, two touchdowns and an interception. He said to the media on Tuesday that he plans to return to TCU in 2022.

The Frogs were without superstars Zach Evans and Quentin Johnston, both of whom struggled with injury for the latter half of the season.

The loss drops TCU to 5-7 to finish 2021, meaning that it will miss a bowl game for just the fourth time this century. This is also the first time the Frogs have missed the postseason twice in a span of three years since they missed bowl eligibility in 1995, 1996, and 1997 seasons.

The university is expected to have an official announcement on its new head coach in the coming days.