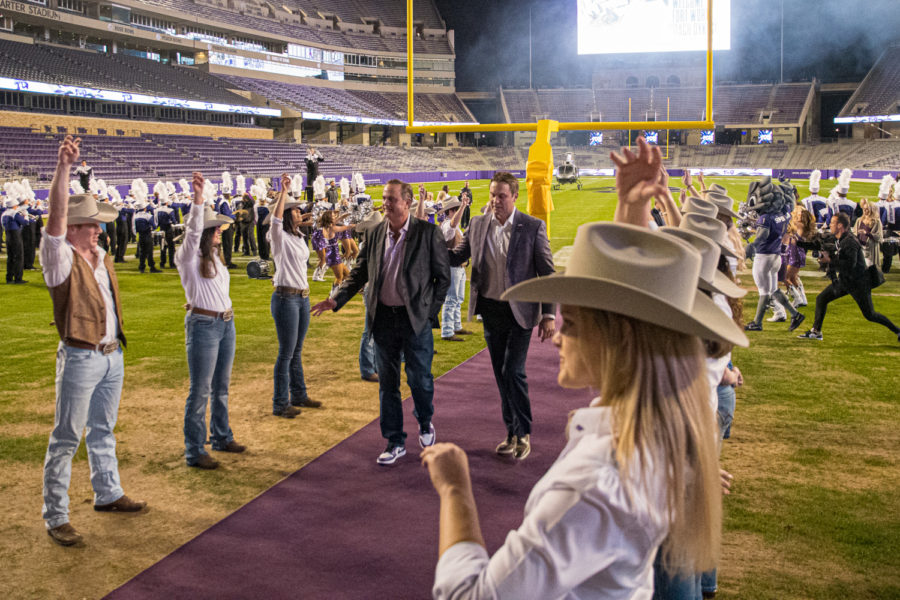 On Monday evening, TCU officially confirmed that they were hiring former SMU head coach Sonny Dykes to be the next head coach of their football program.

Per Drew Davison of the Fort Worth Star Telegram, Dykes’ contract is for six years and “close to” $30 million.

Minutes later, Dykes landed at Amon G. Carter Stadium in the “Frogcopter” and attended TCU basketball’s matchup with Austin Peay. He, joined by his family, was welcomed by Athletic Director Jeremiah Donati, several school officials, the TCU Showgirls and Cheerleaders, the TCU band and about 1000 fans watching from the stands.

TCU Athletics had teased fans with a video with the theme song of the hit sitcom “It’s Always Sunny in Philadelphia” on Monday morning to all but confirm the hire.

Dykes leaving the Mustangs for their crosstown rival has been the worst-kept secret in North Texas, as he was labeled the “front-runner” for the job in the hours following Patterson’s departure on Oct. 31.

Over the last month, several other names came up as potential candidates, with Jackson State head coach NFL Hall of Famer Deion Sanders and former Louisiana head coach Billy Napier being the two most prominent.

Two weeks ago, though, it was reported that TCU had moved on from Sanders, because they wanted a candidate with “more experience.” A few days later, Napier signed on for a snazzier job– the next head coach of the Florida Gators.

Iowa State’s Matt Campbell, Justin Fuente (formerly Virginia Tech) and even Dallas Cowboys Offensive Coordinator Kellen Moore were among others listed as possibilities for TCU, but Dykes remained the top candidate through it all.

During TCU’s 48-14 loss to Iowa State on Friday afternoon, ESPN Radio’s Ian Fitzsimmons tweeted the news that Dykes was officially headed to Fort Worth.

SMU Head Coach, Sonny Dykes will be the next head football coach at TCU. I am told SMU offered a package up to $4 million but TCU’s was “significantly more.”

TCU refused to comment officially on the matter, and so did Dykes, but the tweet was enough to convince the nation, including SMU fans, that the head coach’s time in Dallas was done.

Meanwhile, the Mustangs knew Dykes was about to break their hearts. Some fans at Saturday’s home matchup with Tulsa wore “TCU sucks” t-shirts and jeered insults at their soon-to-be former leader.

One student held a sign that read “Thanks for nothing, Judas Dykes.”

SMU lost 34-31, dropping their fourth game in five contests after a 7-0 start. At his postgame press conference, Dykes didn’t say he was going west, but he made it clear that SMU was done.

Hired following the 2017 season, Dykes soon turned SMU from a program still recovering from the death penalty to a force to be reckoned with in the college football world. In the four years before Dykes’ arrival, SMU had gone just 15-34 with just one bowl appearance.

After the Mustangs went 4-4 in AAC play in Dykes’ first year, they would go on to go 25-10 over his next three seasons, earning bowl eligibility each year.

Worse, SMU has walked away with the “Iron Skillet” in the last two matchups.

After over a decade of jobs as an offense-focused assistant coach, Dykes coach his first head coaching job in 2010 at Louisiana Tech. He would lead the Bulldogs to a 22-15 record in three years, earning an offer to be the head coach at California for his first Power 5 head coaching job.

In Berkeley, Dykes did lead the Golden Bears to 8-5 years and Armed Forces Bowl win in 2015, but a 19-30 record across his four years eventually led to his firing in January 2017.

During TCU’s Big 12 Championship run in 2017, Dykes was an offensive assistant for TCU, mainly doing work off the field. He was hired by SMU in December of that same year.

One of TCU’s biggest draws to Dykes is his ability to recruit. Prior to the word of his departure getting leaked, Dykes had assembled one of the greatest SMU classes ever for 2022, ranking No. 56 nationally with several four-star recruits.

During his time at SMU, Dykes also showed to have valuable skills in the transfer portal, swaying talented players like Reggie Roberson, Tanner Mordecai and Grant Calcaterra to head to Dallas from Power 5 programs.

Patterson’s departure has cost the Frogs: all but three of their recruits for the 2022 class are gone.

Only wide receivers coach Malcolm Kelly and safeties coach Paul Gonzalez, both of whom are player favorites, are expected to be retained.

After finishing 5-7, TCU will not be playing in a bowl game. Dykes will work towards putting the Frogs’ recruiting class back together before early signing day on Dec. 15.