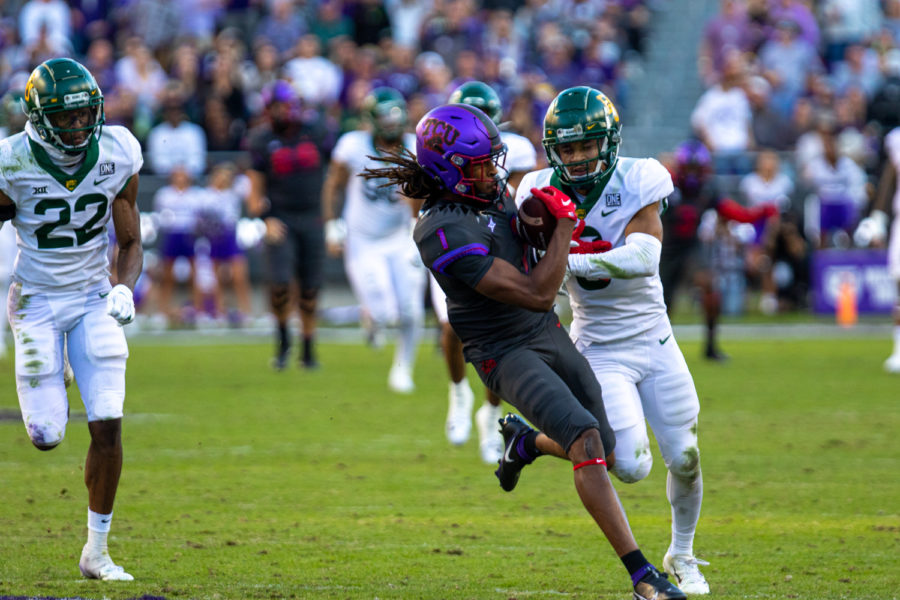 The All-Big 12 awards were announced on Thursday morning, and, despite a disappointing season, TCU football was represented well on each team.

Eight different Horned Frogs were highlighted in some form or fashion by the awards list, with four of them receiving honors for the first time in their careers.

Though his numbers were not as sharp as 2020, Tomlinson still stood out as one of the conference’s best cornerbacks in 2021, recording 41 tackles, 7 pass breakups (team-high), 2 forced fumbles (team-high), and 2 interceptions (tied for team-high).

Despite missing four games (and the majority of a fifth game) with injury, wide receiver Quentin Johnston joined Tomlinson on the first team. This was his first time to make an All-Big 12 team after receiving Honorable Mention honors a year ago.

In 2021, the sophomore wideout led the Frogs with 634 receiving yards, 19.2 yards per reception, and 6 receiving touchdowns. He was featured on ESPN’s “You got Mossed!” after a contested catch he made during a career day against Oklahoma (7 catches, 185 yards, 3 touchdowns) earlier this season.

Johnston also received an honorable mention for offensive player of the year.

Avila started in 11 of 12 games for the Frogs, helping them rank third in the Big 12 with 196.3 rushing yards per game. Mathis tied for the team lead with 4.0 sacks, adding 57 tackles, 7.0 tackles for a loss, and 3 pass defenses as well. Davis returned a kickoff 100 yards for a score against West Virginia, averaging 29.6 yards per return (10th nationally).

Davis also received an honorable mention for Special Teams Player of the Year.

TCU finished their season 5-7 and will not be eligible for a bowl game.