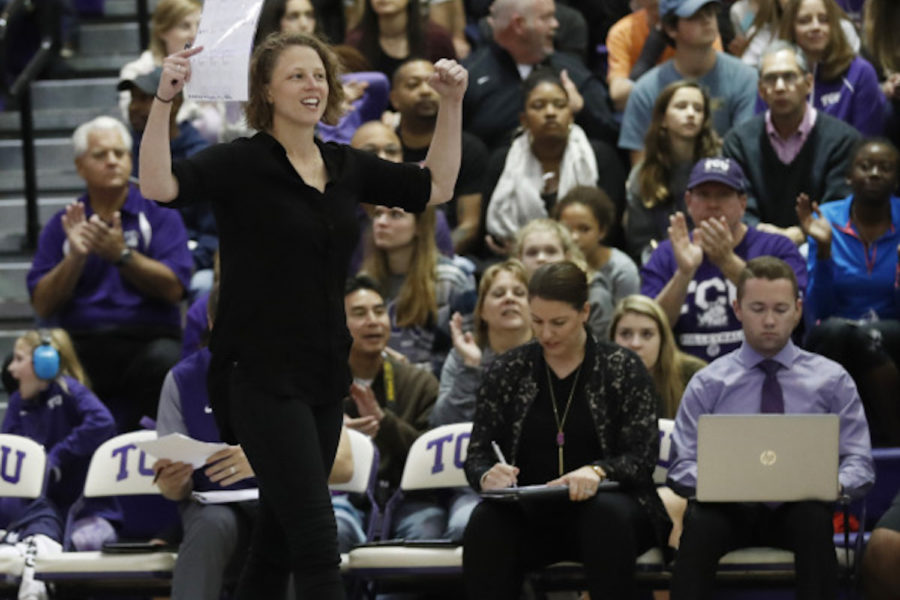 By Camille Plunkett and Charles Baggarly

After a disappointing season, the Horned Frogs have cut ties with head coach Jill Kramer, who has led the Frogs the past seven years.

The news was first reported by Drew Davison at the Fort Worth Star-Telegram, but no official announcement has been made by the team or Kramer. TCU 360 has since confirmed with TCU Athletics that Kramer and TCU volleyball have parted ways.

“We have parted ways with Jill [Kramer] after seven seasons,” a TCU Athletics spokesperson said. “We’re very thankful for everything she has done. It was time for both parties to go our separate ways.”

Kramer was hired as head coach in December of 2014, making her the third head coach in Horned Frog volleyball history. Kramer, a TCU alum, has brought TCU volleyball to two NCAA tournaments in 2015 and 2016. Kramer’s legacy remains with the program, setting the record for its first sellout season. In 2019, the Rickle was sold out for every home game.

This season, the Frogs went 8-18 and only 2-14 in league play, placing them last in the Big 12 standings. They finished the season on a sour note, capping off a nine-game losing streak against West Virginia on Nov. 27.

The Frogs were also winless on the road. Their two wins came at Schollmaier Arena against Kansas State and Oklahoma, the two weakest teams on the schedule.

This year, after moving to the Schollmaier Arena, TCU volleyball broke the attendance record with 4,012 fans in attendance. Although the Frogs struggled this year, they have young players such as middle blocker Alfedo Manyang, defensive specialist Cecily Bramschreiber, outside hitter Taylor Raiola and many more who showed great promise.

Although the Frogs had a disappointing season, Kramer’s legacy and impact will carry on.

“The news shocked and saddened me,” said student section leader Brendan Healy. “Over the past semester, I’ve gotten to interact with coach Kramer on multiple occasions and she’s absolutely blown us away with how incredibly kind and dedicated she is towards making TCU volleyball the greatest it can be. She’ll be greatly missed, and regardless of who takes her place, no one will be able to replicate her generosity and spirit.”

There is no word yet from TCU Athletics on a timetable for hiring the next head coach.