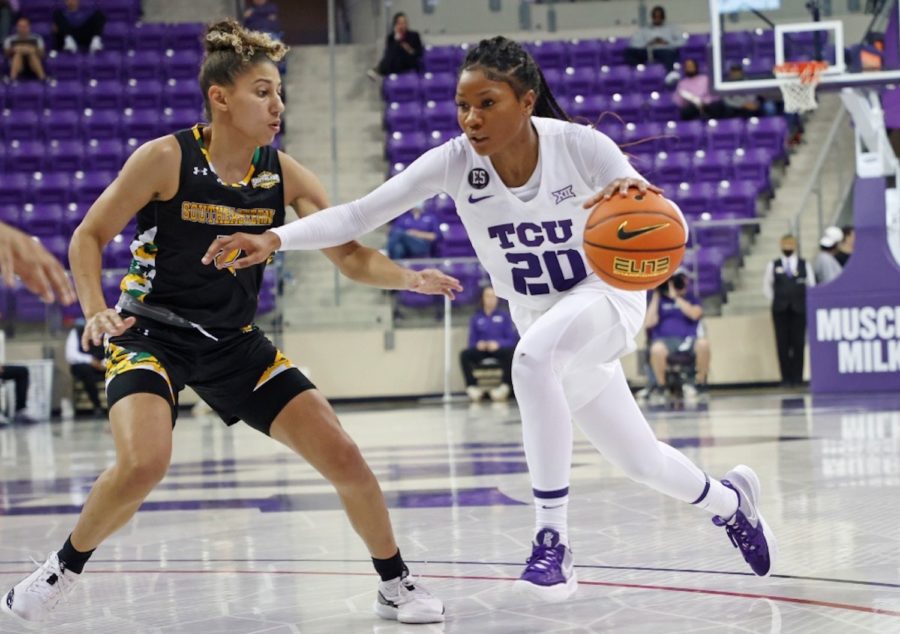 Guard Lauren Heard moved up to No. 5 all-time in Wednesday night’s game versus Southeastern Louisiana (2-5), but it was Arizona transfer Okako Adika who led TCU women’s basketball to victory.

At times during the match, the Denmark native seemed to be one of the only Frogs who could get a bucket. Adika led a trio of TCU players scoring in double-figures as she tallied team-highs of 15 points, a 60% field goal percentage that included a hat-trick of three-pointers and eight rebounds.

Despite surpassing Lynn Davis’ total of 1,683 career points and moving to No. 5 in Frogs history, Heard was held silent for most of the first three quarters, scoring just six points and shooting 22% from the field.

Lions guard Breonca Ducksworth and the Lions led ferocious a full-court press on Heard and TCU from the tip-off, and the early pressure was working in the Lions’ favor.

“Everything [the Lions] do is an aggressive and ‘keep you out of the flow’ kind of thing,” said TCU head coach Reagan Pebley. “They definitely had a lot of success with that I think, especially in that first half.”

Trailing 10-13 going into the second quarter, the Frogs’ first three possessions of the quarter were two turnovers and a missed shot. Heard was showing signs of frustration as she gazed up and smacked her hands together.

Adika kept the Frogs in the game in the midst of an absence of TCU buckets, being a scoring presence inside and outside for an effective 11 points in the half.

Senior guard Caroline Germond also injected some life into the Frogs, forcing a halfcourt strip and hitting a three on the other end to edge out Southeastern Louisiana in the half 24-21.

About three minutes into the third quarter, the Lions went on a 7-point run that stifled TCU and convinced Pebley to call a time out.

Adika and senior Michelle Berry came out of the break on fire, giving the Frogs their best run all game with 10 straight points to take a narrow lead by the end of the third.

With the game winding down, a Christmas caroling TCU band section sang through all twelve of the Twelve Days of Christmas before Southeastern Lousiana could get a shot to fall, as the Frogs held the Lions scoreless from 6:37 to 1:25 left in the fourth.

With 3:28 remaining in the bout, Germond drained a big three-pointer, followed by Heard euro stepping through the lane for a quick layup.

A few plays later, Heard zinged a confident dart to Berry inside, who knocked down her shot and gave the Frogs a convincing lead with little time remaining for the Lions to play catch up.

The Lady Frogs ended the game with a win and a final score of 55-46.

Despite struggling all game, Heard bounced back to hit a few crucial buckets and free throws down the stretch to get more than she needed to move into the top five of all-time TCU scorers. She finished with 12 points, four assists and seven rebounds.

“I felt like tonight was a good gut check for me and my team. I’m just glad we got the win,” Heard said in the postgame press conference.