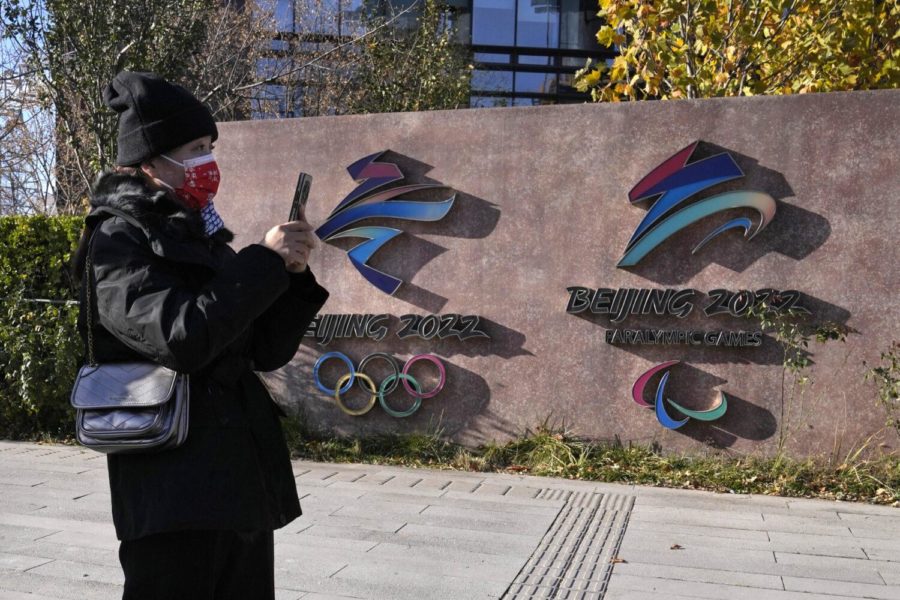 A visitor to the Shougang Park walks past the logos for the Beijing Winter Olympics and Paralympics in Beijing, China, Tuesday, Nov. 9, 2021. China on Monday, Dec. 6, 2021 threatened to take "firm countermeasures" if the U.S. proceeds with a diplomatic boycott of February's Beijing Winter Olympic Games. (AP Photo/Ng Han Guan)

FILE – In this Feb. 3, 2021, file photo, exile Tibetans use the Olympic rings as a prop as they hold a protest against the holding of the 2022 Beijing Winter Olympics, in Dharmsala, India. Facing the boycott-threatened Beijing Winter Olympics in just over six months, the International Olympic Committee said on Wednesday, July 28, that its only responsibility was to “deliver the Games” and not to monitor human rights. (AP Photo/Ashwini Bhatia, File)

The Biden administration will not send any diplomats to the upcoming Winter Olympics in Beijing in protest of China’s crimes against humanity, according to FOX News.

The announcement was made by White House Press Secretary Jenn Psaki Monday afternoon amid calls to boycott the event by congressional Republicans and human rights activists.

“The Biden administration will not send any diplomatic or official representation to the Beijing 2022 Winter Olympics and Paralympic Games, given the PRC’s ongoing genocide and crimes against humanity in Xinjiang and other human rights abuses,” Psaki said.

Chinese government officials have committed human rights abuses against Uyghur Muslims in the northwestern Xinjiang region, atrocities that garnered sanctions from the Biden administration in March.

The Chinese government has also received growing international backlash as of late for its treatment of Hong Kong protestors and its policies toward Taiwan and Tibet. State Department Spokesman Ned Price said other countries may soon follow suit.

“We fully expect that other countries will announce their decision in the coming days and weeks,” Price said. “What we know today is that there are many countries around the world, including many of our closest allies, who share these concerns.”

If the diplomatic boycott of the Olympics is followed through, China has threatened to take “firm countermeasures” against the U.S. 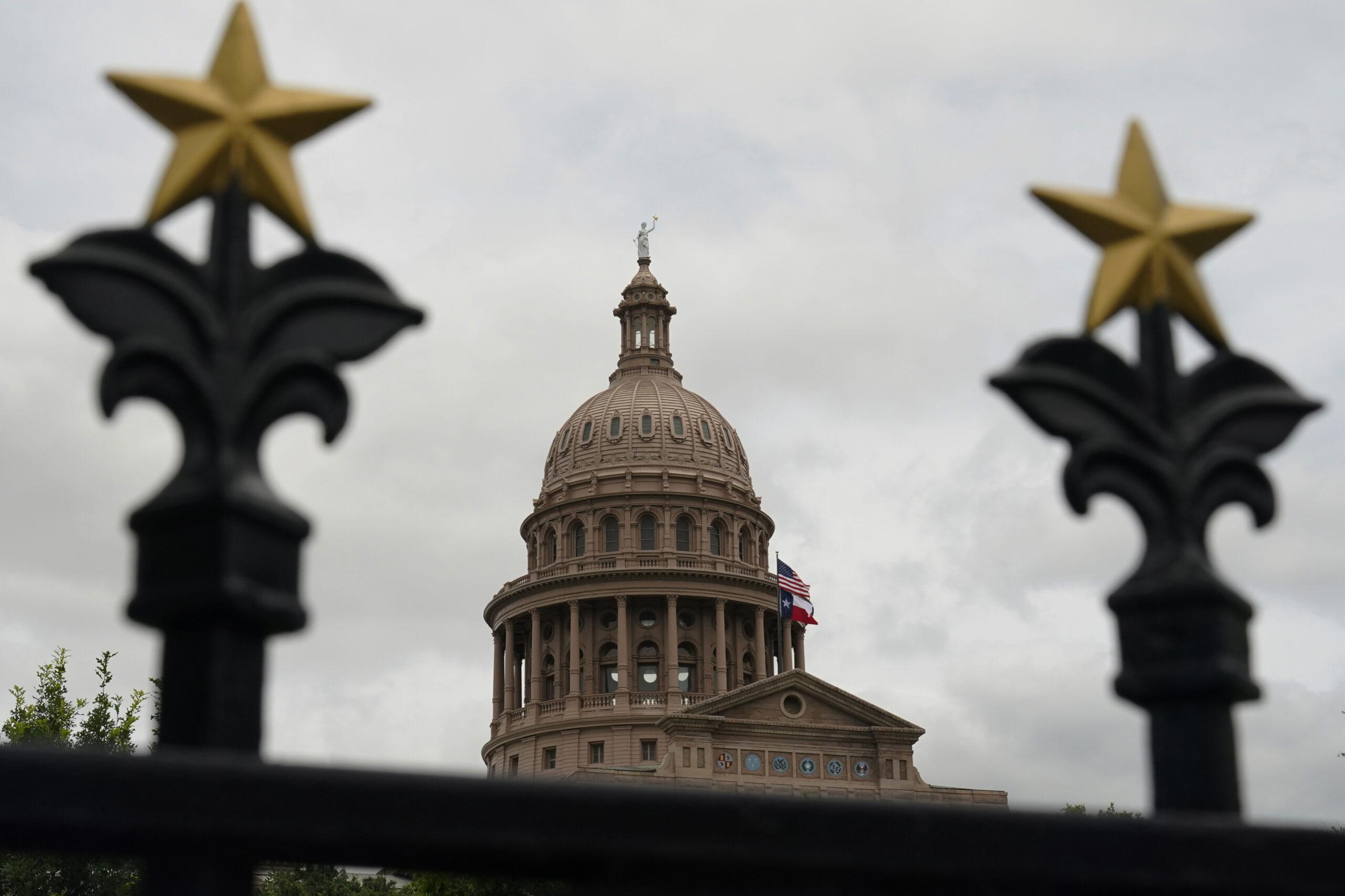 The U.S. Department of Justice sued the state of Texas in federal court on Monday over Republican-drawn congressional and state legislative districts based on 2020 census figures, per NBC News.

The lawsuit accuses Texas of violating the Voting Rights Act through new voting maps that, “deny or abridge the rights of Latino and Black voters to vote on account of their race, color or membership in a language minority group,” Attorney General Merrick Garland said.

“Our investigation determined that Texas’ redistricting plans will dilute the increased minority voting strength that should have developed from these significant demographic shifts,” Gupta said.

If won, the suit will prevent Texas from implementing these new maps. 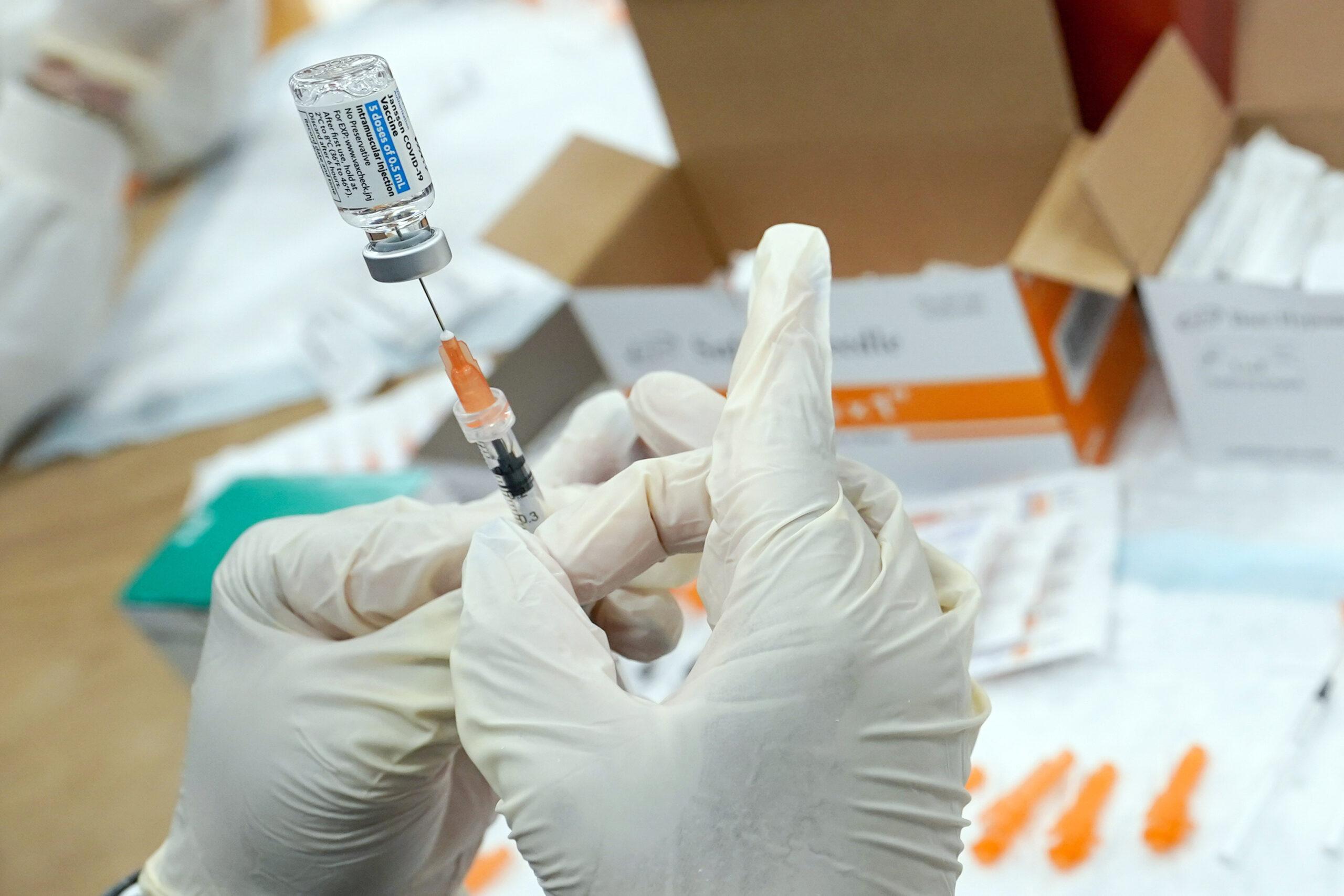 FILE – A registered nurse fills a syringe with the Johnson & Johnson COVID-19 vaccine at a pop-up vaccination site in the Staten Island borough of New York, April 8, 2021. All private employers in New York City will have to require their workers to get vaccinated against COVID-19, Mayor Bill de Blasio announced Monday, Dec. 6, imposing one of the most aggressive vaccine rules in the nation. (AP Photo/Mary Altaffer, File)

New York City Mayor Bill de Blasio announced on Monday that COVID-19 vaccine mandates will be expanded to all private-sector employees and children as young as five years old, according to Reuters.

The mandate expansion comes in response to concern over the growing presence of the new highly contagious Omicron variant in the United States.

“Vaccination is the way out of this pandemic, and these are bold, first-in-the-nation measures to encourage New Yorkers to keep themselves and their communities safe,” said de Blasio.

Workers in all of NYC’s 184,000 businesses must show proof of vaccination to their respective employers by Dec. 27, and children ages five to 11 are required to receive their first doses by Dec. 14.

Currently, 15% of children in NYC ages five to 12 are fully vaccinated against COVID-19 and 27% have received their first doses, while 81% of adults 18 and older have reported the same status, according to nyc.gov.

Children ages 12 and up must be fully vaccinated by the Dec. 27 deadline as well, or else they will be unable to dine in restaurants or participate in any extracurricular school activities.

Dallas police have arrested two suspects in connection to a street-racing crash in Far East Dallas last month that killed a 73-year-old woman, per The Dallas Morning News.

The vehicles involved, a black Chevrolet Impala and a yellow Chevrolet Camaro, were identified as belonging to the pair by both Montoya’s mother and one of the suspect’s employers, according to an arrest warrant affidavit.

Reports of reckless driving on Dallas city streets rose during the first year of the COVID-19 pandemic, but this year’s totals are comparatively less than in 2020.

Pearson’s daughter, Shashana Pearson-Hormillosa, said that the Dallas police and District Attorney’s Office, “must work to ensure a just sentence is imparted and that the penalties for criminal street racing are substantially increased so that the streets of Dallas are made secure enough that we can safely walk our dogs without fear of death or dismemberment.”

Martinez was held at the Dallas County Jail with bail set at $175,000 Monday, while Montoya was released on bond.