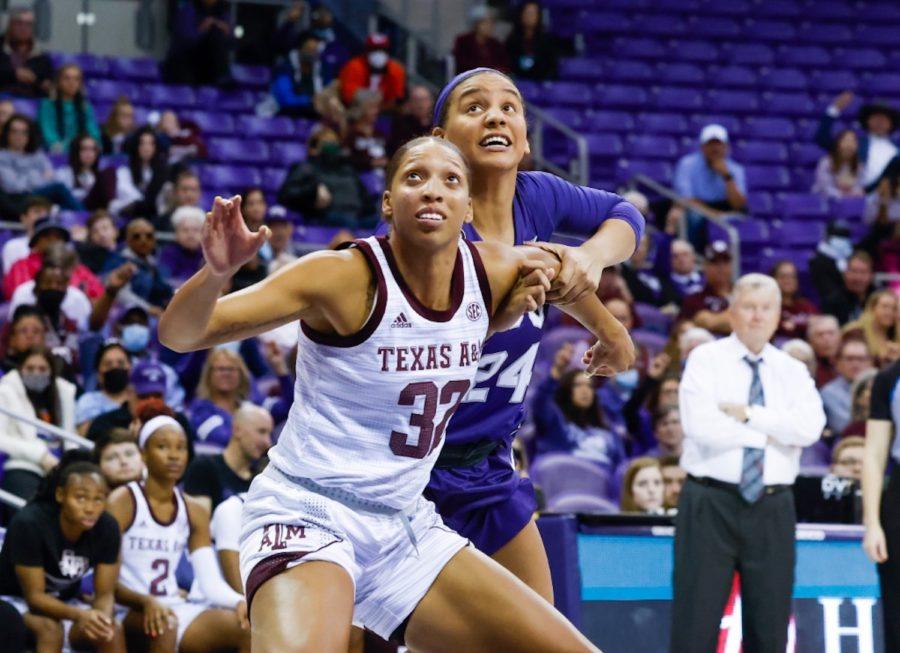 TCU vs Texas A&M women's basketball in Fort Worth, Texas on December 12, 2021. (Photo by Sharon Ellman)

In its second-consecutive SEC matchup, TCU women’s basketball (4-4) bounced back after its loss last Sunday to get its first statement win of the season a week later.

The Frogs came out of the gate on fire compared to a Texas A&M (9-2) team that couldn’t get many shots to fall, shooting an underwhelming 26.3% from the field.

TCU kept Texas A&M in check for most of the game, leading by as much as 29 by the third quarter.

The Aggies came back within 10, though, off a valiant fourth-quarter run where the Aggies outscored TCU 32-26, but this week’s Big 12 Player of the Week did just enough to keep the Frogs ahead.

TCU super senior Lauren Heard knocked down 13-14 free throws in the fourth quarter to put the Aggies on ice until the final buzzer.

Heard — named the Big 12 Player of the Week — scored 33 points in Sunday’s game, which was the fifth time in her career that she’s scored over 30 points in a game. Off the bench, sophomore guard Aja Holmes had a breakout performance, going for a career-high 22 points that included six three-pointers.

The Frogs also snapped an eight-game losing streak to Texas A&M, one that dates back to 2009, and they did it in a convincing fashion to an impressive Aggies squad ranked No. 18 by the AP and No. 15 in the USA Today Coaches Poll prior to Sunday.

“[I’m] really proud of our team and just their gut check and their perseverance heading into this game as well as throughout this game,” said TCU’s coach Raegan Pebley postgame.

The Frogs’ win over Texas A&M was also a bittersweet moment for some in TCU’s corner, as they had played a team coached by basketball legend Gary Blair possibly for the last time.

TCU’s Pebley honored Aggies’ head coach, Blair, 87, before and after Sunday’s game, celebrating his impact on women’s basketball and upcoming retirement at the end of the season.

TCU graduate transfer Aaliyah Jackson played under Blair from 2016 to 2020, before she became a Frog one year ago. She finished with a career-high in rebounds against her former squad.

The Horned Frogs (4-4) now look ahead to their next matchup versus Incarnate Word (3-4) on Sunday, Dec. 19 at 1 p.m. inside Schollmaier Arena.