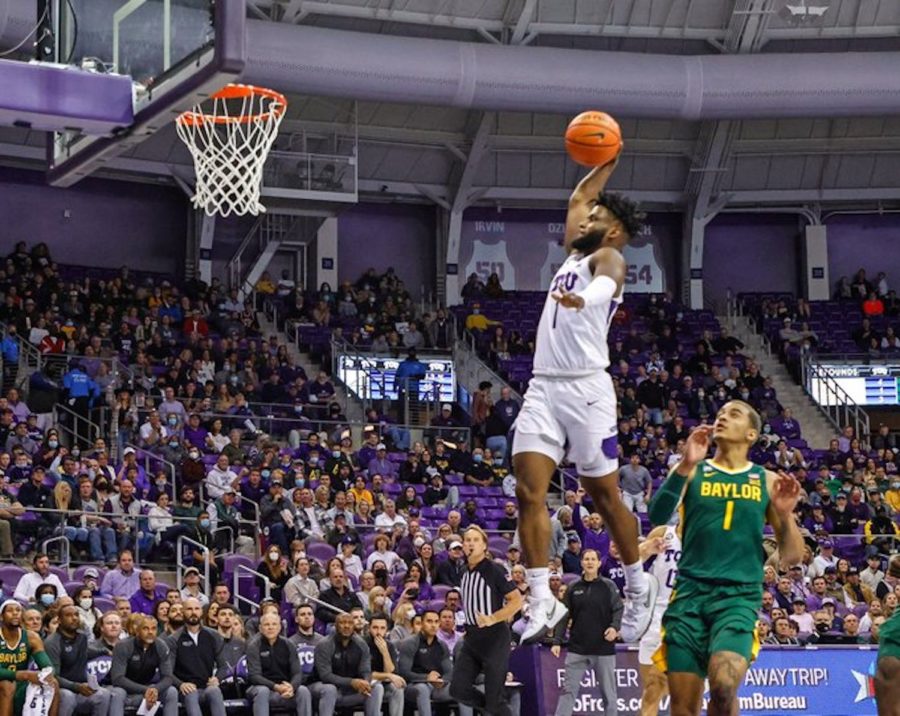 Sixteen days off due to COVID-19 protocols.

That’s the hurdle TCU basketball had to overcome going into its Big 12 opener against the best that both the conference and the entire nation had to offer — the Baylor Bears.

Playing in their first game since Dec. 21 and facing the top-ranked team in the country, the Frogs were not able to shock the nation at Schollmaier Arena on Saturday, but they were able to do something almost as important.

TCU proved that the team belongs in the nation’s top basketball conference.

“We knew from day one that we could play with anybody in the country,” forward Chuck O’Bannon said. “We’re taking this as just a loss because that’s all it is. We know that we’re fully capable of beating them again, and we’re more than excited to go back to Waco next month.”

A surprise to some around the college basketball world, TCU’s ability to hang with Baylor was not a surprise to the Frogs, as the players (O’Bannon and guard Mike Miles) who spoke to the media following the game held back emotion on their faces in wake of the loss.

Led by an 18-point explosion in the first half by Miles, the Frogs held a 37-31 lead over the Bears at the halftime break, even going up by nine in the opening moments of the second half.

From there, the Frogs would hold on for as long as they could, but they could not keep up with a superhuman shooting effort by their state rivals, eventually falling 76-64.

Baylor made eight three-pointers in the second half alone, shooting 67% from behind the arc during that time. Leading the way was sophomore guard Adam Flagler, who made all six of his threes in the final 18:49 of the game.

In the game, the Bears were an impressive 13-for-27 from deep, with Houston native L.J. Cryer right behind Flagler with four made threes of his own.

Another turning point for the Frogs was an injury to Miles’ wrist on his shooting arm at the beginning of the second half that had seemingly diminished his ability to shoot the ball.

Before the injury, Miles had 22 points and looked practically unstoppable.

After hitting two early threes, the point guard flushed a fast break layup to tie the game at 14 just five minutes into the game, flexed at the student section and sent Schollmaier Arena into a frenzy.

The pandemonium by the Frog fans would reappear at the end of the first half, when Miles (with 8-straight points) led TCU on a 14-2 run into the break.

After Miles converted a four-point play to start the second half, he injured his wrist and scored just four for the remainder of the game. During that span, the sophomore (80% from the line on the season) uncharacteristically missed three free throws.

“It hurt. It was tough,” Miles said. “I couldn’t really flick it on my shot. That’s why my two free throws were short. It hurt, so I got to get an X-ray. But hopefully it’s not anything serious.”

The final straw for TCU losing the lead was turnovers. After committing just seven in the first half to Baylor’s nine, TCU turned the ball over 11 times in the second half while forcing only three.

Despite all of that, TCU was within six points (68-62) of the No. 1 team in the nation with less than five minutes to play after missing multiple weeks of practice.

“We got a chance to play against the number one team in the country, and that’s how good you have to be,” head coach Jamie Dixon said. “As I told our guys, we know what the bar is. We know what we have to do.”

Looking for its first Big 12 win, TCU will head to Manhattan, Kansas, this week for a matchup with Kansas State. Tipoff is scheduled for Wednesday, Dec. 12 at 8 p.m. on ESPNU.