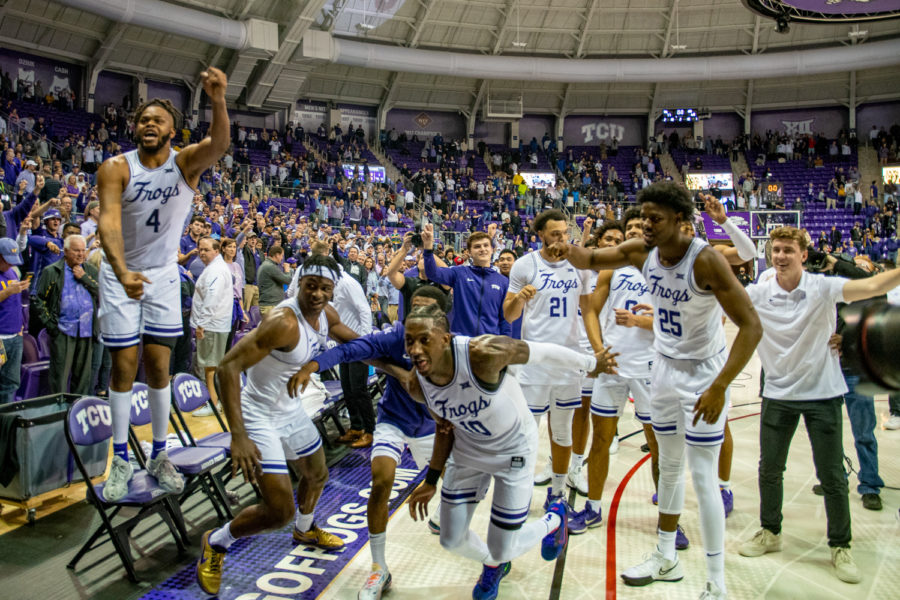 LSU basketball head coach Will Wade sat in front of the Fort Worth press on Saturday afternoon and made light of TCU’s impressive 77-68 win over the Tigers as part of the 2022 Big 12/SEC Challenge.

Maybe the seasoned head coach was right. Maybe LSU should have stayed home, because the Frogs had clawed their way to a resounding win in Schollmaier Arena to bounce back from their worse loss of the season just four days prior.

“We didn’t want that [the Texas loss] to happen again, especially at home,” guard Mike Miles said. “We had that mindset coming in, and that’s why we won.”

Listed as the top defense nationally on Kenpom.com, LSU ranked 7th in the nation and 2nd in the Power 5 with just 58.4 points given up per game heading into Saturday.

None of that mattered for TCU, though, as it put up the most points the Tigers have given up all season, giving them a rude awakening to life in Big 12 basketball.

In reference to what the performance means for TCU’s offense in the future, forward Chuck O’Bannon said, “Sky’s the limit.”

The strongest single surge of offense the Frogs saw all day came from O’Bannon. With TCU clinging to a single-digit lead early in the second half, the super senior drilled three-straight threes, all from the right corner, to blow the game wide open and give the team a 16-point lead with just under 16 minutes remaining.

Before that sequence, the Frogs were just 1-for-11 from downtown.

“They [the three-pointers] felt good. They were pressing these two [Miles and guard Damion Baugh] up top, so that opened it up for me in the back court,” O’Bannon said. “So that was that.”

LSU would later crawl all the way back within one midway through the half, but Miles, who has struggled recently with a wrist injury, took over for TCU down the stretch to protect the lead.

The sophomore scored eight-straight points for the Frogs late in the second half, adding a pinpoint assist to Baugh with 1:30 remaining to put TCU up by nine and all but seal the game. 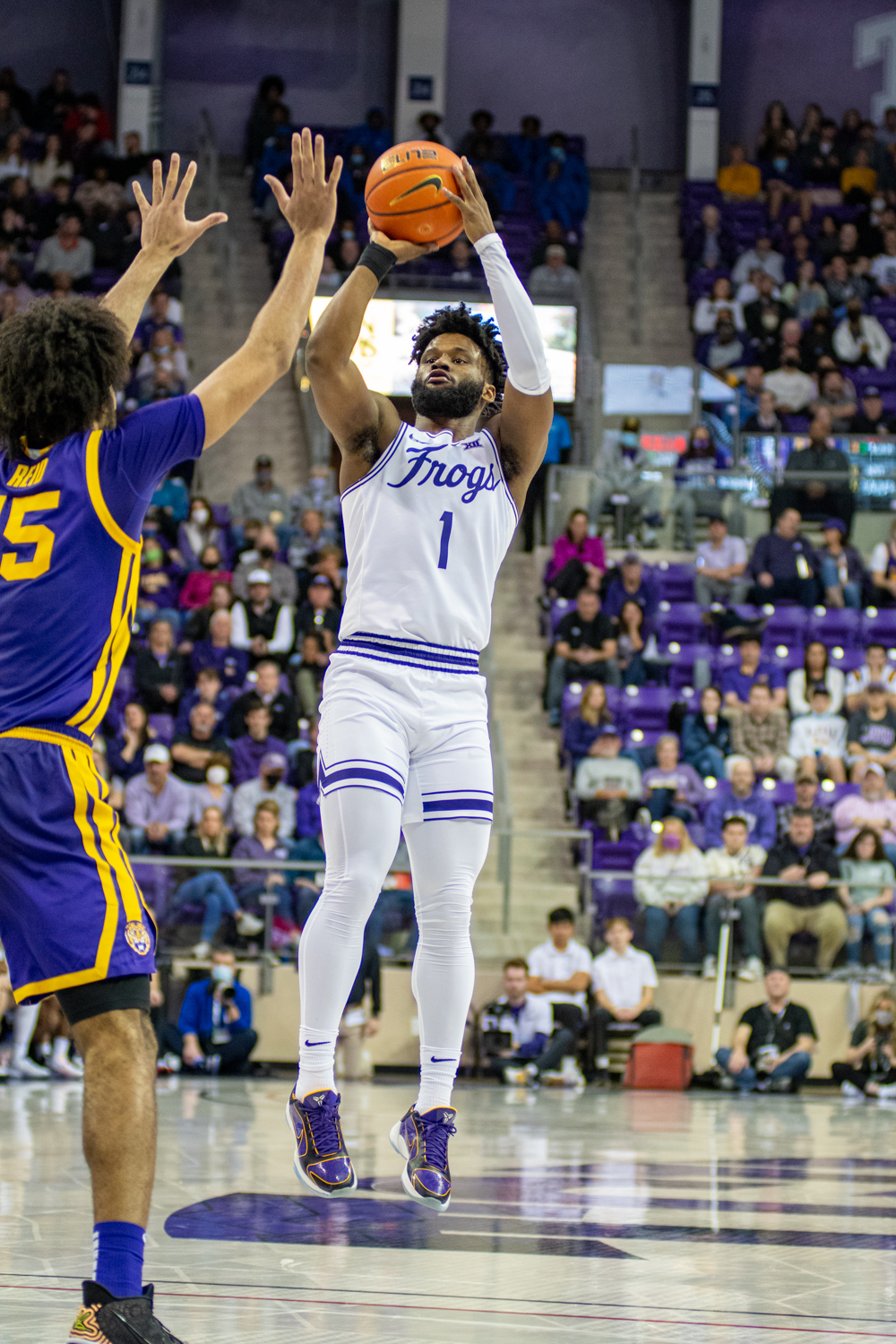 TCU guard Mike Miles (1) pulls up for a jump shot in TCU’s win over No. 19 LSU in Schollmaier Arena on Jan. 29, 2022. (Esau Rodriguez Olvera/Head Staff Photographer)

Both O’Bannon and Miles finished with game-high 19 points, with Miles leading the Frogs in rebounding (8) and assists (6) as well.

“I thought he [Miles] was a little more patient early,” head coach Jamie Dixon said. “Then, I thought he got some penetration and pass. When you take tough shots early and don’t make them, you question yourself. We’re putting a lot on him.”

Miles said postgame that his wrist feels “great right now,” adding that it gets a little sore after games.

After getting outrebounded by 10 on Tuesday against the Longhorns, the Big 12’s leading rebounding team (41.5 per game) was back to form on Saturday, outperforming the Tigers 40-34.

When asked if the Texas loss was an aberration, Dixon said “I think so.”

“It’s hard to beat ranked teams all the time,” Dixon said. “We didn’t play good the other day, but we responded. We had two great practices. We prepared. We took on the challenge.”

Scoring was not a problem early for the Frogs, as they made five of their first seven shots in the game. Forward Emanuel Miller got TCU going with two-straight midrange jumpers before Miles hit a pair of contested shots himself to give TCU a 10-8 lead early on.

Despite the hot shooting start, the Frogs were held back by four turnovers in the first five minutes, feeling the effects of facing the nation’s top defense.

LSU gained some offensive momentum near the middle of the half, going on a 9-2 run, but a series of impressive plays from Baugh prevented the Tigers from pulling away.

The Memphis transfer first hit an acrobatic layup while looking away from the basket to put TCU up 15-12. Then, after LSU gained a two-point advantage, Baugh threw it to himself off the back of a Tiger defender during an inbounds play for a reverse layup that tied the game at 17.

Finally, the guard took a charge that slid him multiple feet across the court to give the ball back to the Frogs. A pair of Miles free throws helped give them back the lead on the next possession. 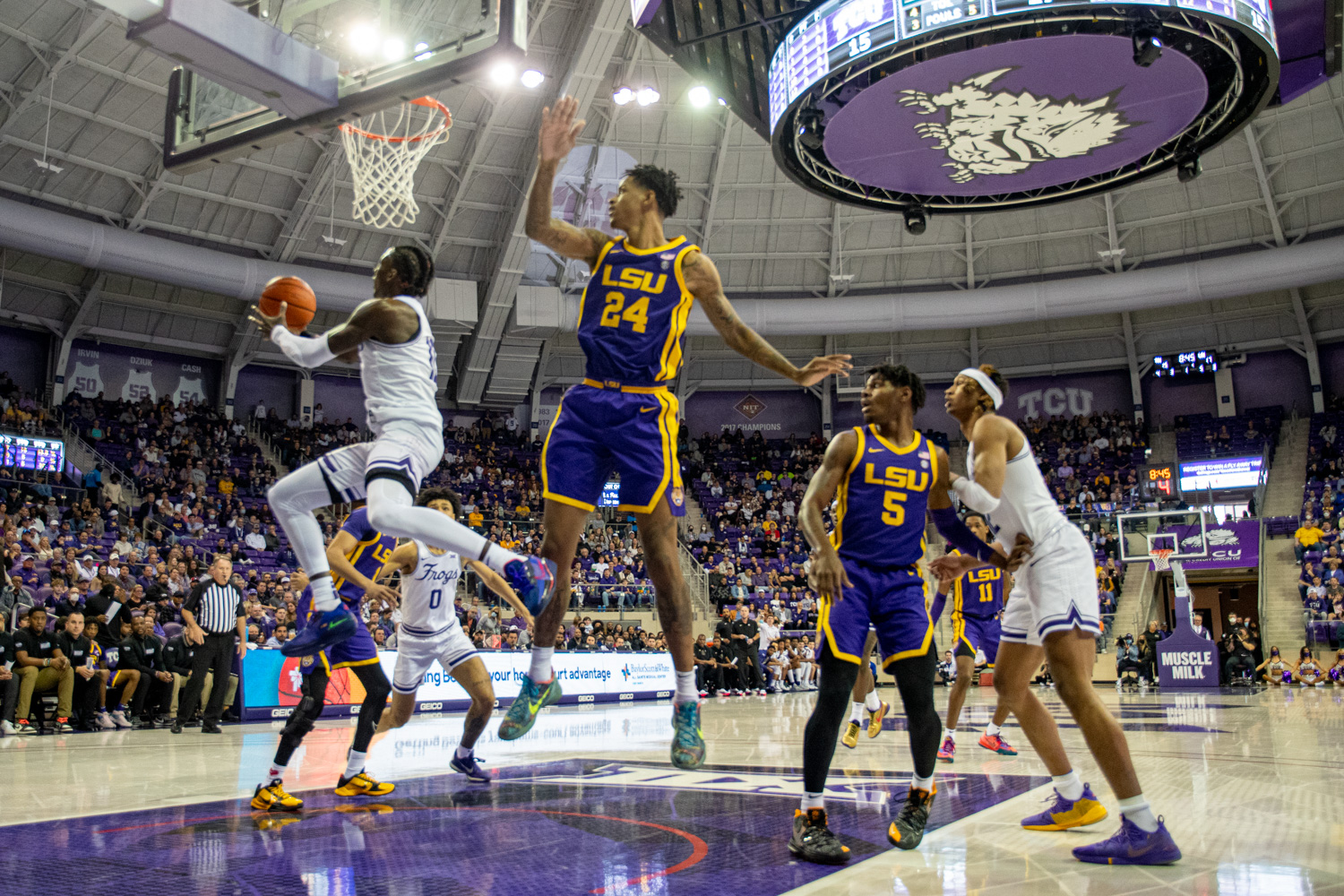 TCU guard Damion Baugh (10) goes up for an acrobatic layup in TCU’s win over No. 19 LSU in Schollmaier Arena on Jan. 29, 2022. (Esau Rodriguez Olvera/Head Staff Photographer)

There were four lead changes in the next four minutes of play, leading to a 26-24 advantage for TCU with 4:41 remaining on a corner three-pointer by guard Francisco Farabello.

The Frogs would then dominate the rest of the half, ripping off a 15-5 run (including the Farabello triple) to take a commanding 38-29 lead into the halftime locker room. Through the first 20 minutes, TCU dominated the boards, outrebounding its opponent 26-16.

The teams locked in defensively at the beginning of the second, scoring just three points apiece through the first 2:45.

At that point, TCU was just 1-for-11 from behind-the-arc, but O’Bannon’s trio of triples opened the game up and gave the Frogs some cushion.

The game was far from over, though. A 15-2 run by LSU in which four different Tigers scored points cut TCU’s lead down to three with 11:22 to go in the game.

Another Farabello three momentarily stopped the bleeding, but another 5-0 run by LSU brought them all the way back within one and had the Tiger fans going nuts.

“At Oklahoma State, we had the lead. They came back, and we didn’t want it to be like that,” Baugh said. “We just had to lock in and get the W.”

Baugh was referencing TCU’s 57-56 loss to Oklahoma State ten days ago in which they gave up a 7-0 run to end the game.

With chants of “T-C-U” and “L-S-U” fighting for dominance, Miles, O’Bannon and Baugh took over the game, scoring 18 of TCU’s final 22 points to earn the Big 12 its first win of the day.

The Frogs had led for 32:57 minutes of the game, earning their first win over a ranked SEC school since 1954.

It’s now a quick turnaround for TCU, as the team heads on the road to play Oklahoma on Monday night. The Frogs have never won in Norman during the Dixon era. Tipoff is scheduled for 8 p.m. on ESPN2.