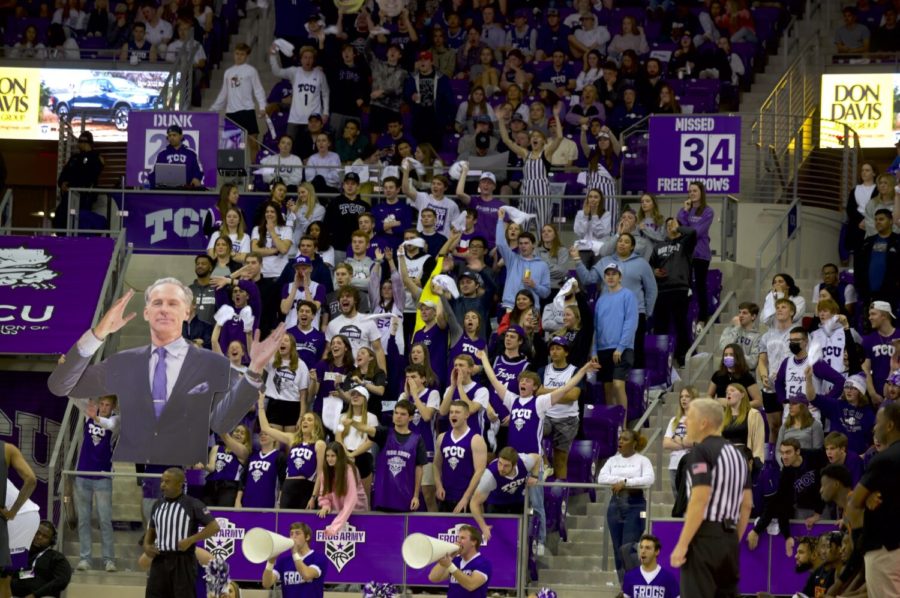 On game days during football season, students routinely show up to “Protect the Carter,” but until this semester, Schollmaier Arena, or Fort Dixon, had been neglected.

“It used to be me, my friends and the 20 other students who liked basketball that would be in the front row, and we would sit the whole game, it was really sad,” said David Stein, 2012 graduate and director of admissions at the Neeley School of Business.

When Stein attended, fans barely showed up to basketball games, despite the TCU Men’s Basketball Student Rewards Program giving away nearly $10,000 worth of prizes, including a trip to Las Vegas and a flat-screen television.

Stein recalled winning a gift certificate and taking advantage of the free haircuts provided during the game. Other students won team apparel, a night out at a local business and an iHome.

Ten years later, students wrapped around the arena to fill the student section after TCU social media announced an on-campus student tailgate for the upcoming game against Oklahoma. The weather outside was cold, but the temperature in the stadium was heating up as fans rushed in.

The cheers from the stands erupted throughout the concourse. In the student section, not a single body was sitting. During the game, students could be seen shifting around the railings, trying to get a view of the game.

“The student section definitely helps to hype up the team and the other fans,” said Kat Kelly, a sophomore nursing major.

The game versus Oklahoma ended up hosting a record-breaking student attendance of 2,144. Just four days later at the game against Texas, students would top that for a new record of 3,594. The UT game also set the record for overall attendance at 8,412.

“I would be surprised if it was even that much. We used to go to the games and we could have a conversation with the other team’s bench because it was so quiet,” said Stein.

While TCU finished 7-7 in conference play with an overall record above .500, the team won two games over ranked opponents (then-No. 11 UNLV and then-No. 18 New Mexico). This came after the rewards system boosted student support.

The student attendance average rose to 600 in the 2017 season. This came after the hiring of current head coach Jamie Dixon. Dixon led the Frogs to an NIT championship that season, and the upward trending student attendance showed their excitement.

Dixon acknowledged the difficulty of having big turnouts at games because TCU is one of the smallest schools in the Big 12, but said the upward trend in student attendance since he took over the team is exciting and great to see.

“The players are very outgoing and the connection we have with the student section is something special, especially because I went here and played,” Dixon said. “I want to make sure it’s a good experience.”

This year, the overall attendance record was broken by nearly 1,000 and the student attendance average sits at 1,031 with three conference home games left in the season.

“The marketing team and Frog Army have done a really great job,” said Dixon. “We really want to make [games] a special experience for students.”

Students are excited about basketball this year and are optimistic they could break another attendance record this season.

“I think we’ll break the record again because students are showing up and creating the culture of a basketball-school that we haven’t had before,” said Kelly.