Unbearable: TCU basketball dominated from start to finish by No. 7 Baylor 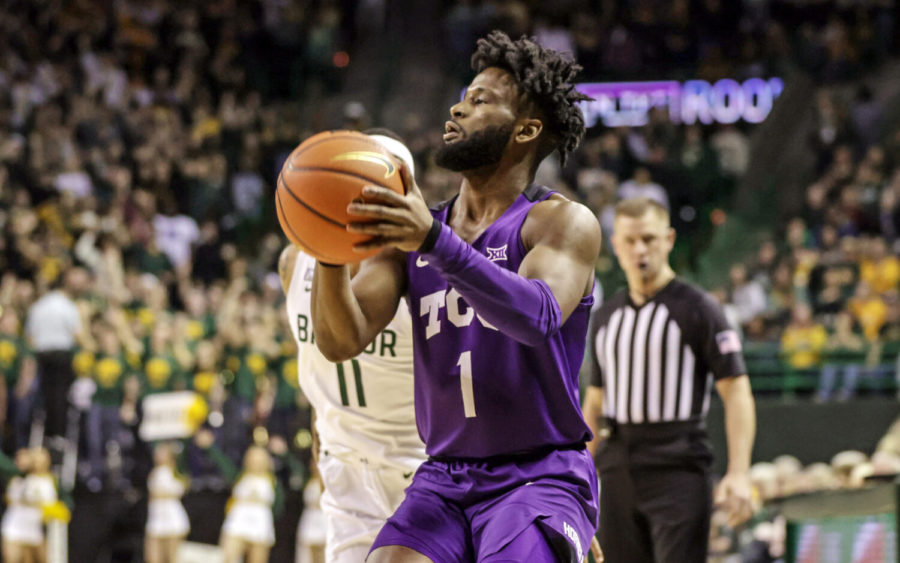 With four members of the 2021 National Championship team in the building watching, a beat up No. 7 Baylor team looked almost like it was drawing strength from its former stars on Saturday afternoon in Waco.

Missing two of their top three scorers (LJ Cryer, Adam Flagler) and their most active big man (Jonathan Tchamwa Tchatchoua), the Bears never let TCU basketball get comfortable at the Ferrell Center as the Frogs lost their third-straight game in a contest where they never saw a lead.

Though both teams shot 18% from 3-point range, Baylor was superb from inside the arc, making 55% of its 2-point attempts and 76% of its free throw attempts to dominate the TCU defense.

Five different Bears finished with double-digit points, combining for 67 of Baylor’s 72 points on the day.

The loss for TCU came despite a career day from Micah Peavy, who finished with 16 points on 6-for-9 shooting to go with six rebounds.

After avoiding back-to-back losses for the majority of the season, the Frogs have now lost three-straight matchups, and they need to find wins quickly to remain in the NCAA tournament scene.

“If I’m going to be real with you, it’s frustrating, because I know how much potential as a team we have and I know how much each individual cares about this program,” forward Emanuel Miller said.

“TCU is absolutely an NCAA tournament team because of their nonconference schedule,” Drew said postgame.

TCU ranks 110th nationally in nonconference strength of schedule, but it sports wins over Power 5 opponents like LSU, Texas A&M and Utah.

TCU looked rattled to start the game, coming up empty on its first five possessions and finding itself in a 7-0 hole right away.

Even after the Frogs got going offensively, scoring two-straight buckets, Baylor still had an answer. The Bears went on yet another 7-0 run just minutes later to put TCU down 10.

A scoring surge by guard Micah Peavy then helped the Frogs get back in the fight. The Texas Tech transfer scored 7-straight points to pull the Frogs within 4 near the midway point of the half.

TCU pulled all the way within 2 but then went over four minutes without scoring, allowing Baylor to extend its lead right back to 7.

Late in the half, the Frogs had a chance to break a streak of over five minutes without a field goal with a wide open layup, but it rimmed out. TCU could simply get nothing going on offense, and Baylor went up by 12 with 5:13 before halftime.

The Frogs pulled within 6 at one point on three-straight buckets from Miller, but they did not score for the last 2:46 of the half and went into the locker room with a 33-23 deficit.

Ten turnovers, eight fouls and 9-of-26 shooting had plagued TCU in the first 20 minutes of play. Baylor’s 0-for-6 status from 3-point range had prevented them from blowing the game open.

Before even two minutes had gone by in the second half, the Bears extended their run from the first half to 10-0, and the Frogs were down 16 before they could even blink.

That deficit grew to 18 before guard Damion Baugh scored his first points of the game with 13:33 remaining to make it 48-33 in favor of the Bears.

The Memphis transfer is the Frogs’ second-leading scorer with 10.7 points per game, but he finished with just nine points on 4-of-10 shooting in the contest.

Over the next seven minutes of play, Baylor’s lead fluctuated between 14 and 19, with TCU doing just enough to stay in it but not enough to make the game interesting.

Around the seven-minute mark, forward Matthew Mayer hit the Bears’ first two 3-pointers of the game on back-to-back possessions, extending Baylor’s advantage all the way to 20.

A 13-1 run scoring run that featured buckets by four different Frogs cut Baylor’s lead to 71-62 with 43 seconds to play. That was simply to prevent embarrassment for TCU, though, as the nails in the coffin had sealed the game long beforehand.

TCU outrebounded Baylor 35-39 in the loss. During their three-game skid, the Frogs have won or tied the rebounding battle each time.

After forward Eddie Lampkin went down with a knee injury late in the second half, Dixon said postgame the first-year “seems to be okay” going forward.

Over the next seven days, the Frogs will play three games, two of which are against ranked opponents (No. 20 Texas, No. 11 Texas Tech). They’ll start the stretch Monday night at home against West Virginia.

“We play Monday against West Virginia. We can’t view them as any other team that’s less than us,” Miller said. “Like I said, each team is a great team. We have to attack early.”

Tipoff against the Mountaineers is scheduled for 7 p.m.