Back on: TCU basketball proves resilient in crucial win over West Virginia 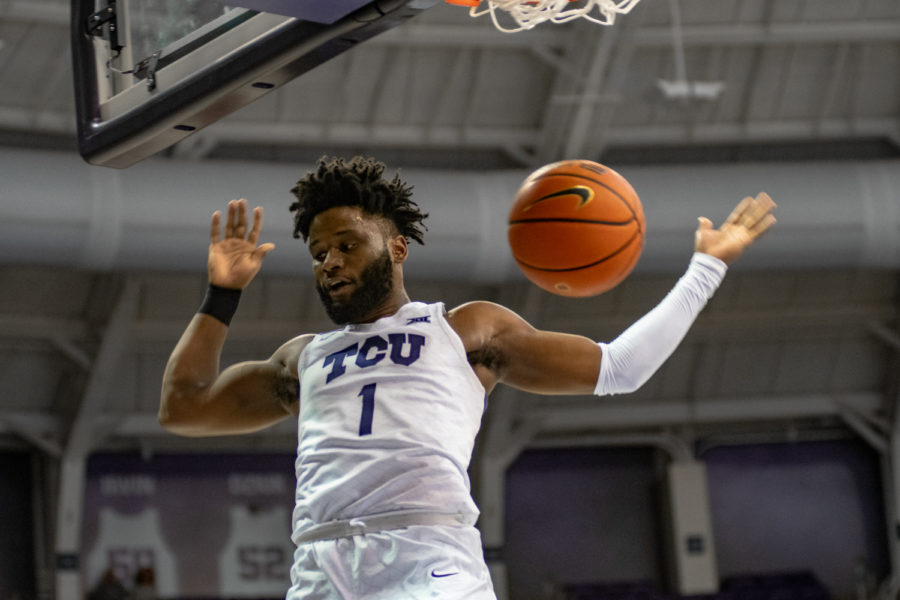 TCU guard Mike Miles (1) flushes a dunk during TCU's win over West Virginia in Fort Worth, Texas, on Feb. 21, 2022. Miles had 15 points in the game. (Esau Rodriguez Olvera/Head Staff Photographer)

During the 2020-2021 season, TCU basketball started strong in conference play, winning two of their first three Big 12 matchups, before losing 12 of their last 15.

This year, the Frogs won three of their first five Big 12 games, before losing five of their next seven and facing the chance of a similar predicament.

On Monday night, TCU proved resilient, though, ending their recent three-game losing streak with a well-rounded 77-67 win over West Virginia at home.

Five different Frogs finished with double-digit points in the win, and TCU set a season-high with 54% shooting from the floor as a team.

Leading the way was Miller, who scored 18 points and grabbed eight rebounds. Right behind him was guard Mike Miles, adding 15 points along with five assists, four rebounds and two steals.

After going crazy in the first half for 17 points, West Virginia guard Taz Sherman scored just six points in the second half, finishing with a game-high 23 points but on a whimpering note.

“He [Sherman] hit two shots that we could not have guarded any better in the first half,” head coach Jamie Dixon said. “It’s interesting. We really talk to our guys about this. I get made when guys get layups on us. They get mad when a guy hits a really tough shot on them, and I’m fine with that.”

For the 21st time this season, TCU won the rebounding battle in the game, but on Monday, it came in resounding fashion. The Frogs grabbed 42 rebounds to the just 24 of the Mountaineers.

Now 6-7 in Big 12 play and 17-8 overall, TCU needs at least one more win to get an at-large bid to the NCAA tournament. They have five more regular season games and the Big 12 tournament to add to their postseason resume.

TCU was missing forward and lead energizer Eddie Lampkin, who suffered a knee injury on Saturday against Baylor. Starting in his place, center Xavier Cork got right to work, scoring the first four points of the game to give TCU an early lead.

Cork stayed productive all night, finishing with season-highs in points (10) and blocks (4).

From there, the score went back-and-forth. Both teams were shooting well over 50%, as neither side could string together defensive stops.

Finally, six-straight points from Miles helped lead a 15-3 run by the Frogs that put them up 10 (40-30) with just under five minutes to play in the half.

At that point, it seemed like TCU was in full control of the game, but Sherman then began to display why he is one of the top scoring threats in the conference.

The senior scored 10 of the last 15 points of the game, including the last eight, to lead West Virginia on a 12-3 run to end the half and make it a one-point game.

Any momentum the Mountaineers gained to end the second half seemed to disappear at the start of the second. Six points right away from Miller helped the Frogs go on a 9-2 run and push their lead back to eight in the first three minutes.

The run was capped by an emphatic put back dunk by Miller following a missed three-pointer.

Shortly there after, the game turned into a sloppy slugfest. The two teams both went long, simultaneous stretches without a made field goal, with TCU’s lasting over seven minutes and West Virginia’s going for nearly five minutes.

As he had all night, it was Miller who stepped up for the Frogs and ended their drought, hitting a contested fast break layup.

West Virginia continued to see struggles on the scoring side of things, allowing for TCU’s lead to get up to 13 two different times in the last four minutes.

One of those leads came on a steal-and-score by Miles, who responded to his missed free throw on one end with a defensive stop on the other end that translated to a bucket.

“With my free throws not going in, I knew I had to step up in some kind of other way,” Miles said. “That’s what I did on defense.”

The sophomore, who said he is still feeling his wrist injury, went 5-for-10 from the free throw line.

The Frogs all continued to improve defensively, holding the Mountaineers to zero points in the last 1:20 to seal a win and break their three-game slide.

Dixon said postgame that losing when playing in the Big 12 conference is not always a sign of whether a team is good or bad.

“Even good teams, top teams in the country, lose. There’s nobody going undefeated,” Dixon said. “This thing’s [the Big 12], top-to-bottom, the best it’s ever been, I think.”

After West Virginia shot 55% in the first half, the TCU defense stepped up big time to hold the Mountaineers to just 35% shooting in the second half.

Guard Damion Baugh flirted with a triple double in the win, finishing with 10 points, seven rebounds and seven assists.

Despite the win, TCU had lost in the area of turnovers, committing 16 while forcing only 11.

“You’ve got to find a way to cut down turnovers,” Dixon said. “Even in the second half, with a big lead, we still find ways to turn it over.”

Looking to inch further towards the Big Dance, TCU has a quick turn around, as they head to Austin for a matchup with No. 20 University of Texas on Wednesday. Tip-off is set for 6 p.m. on ESPN2.