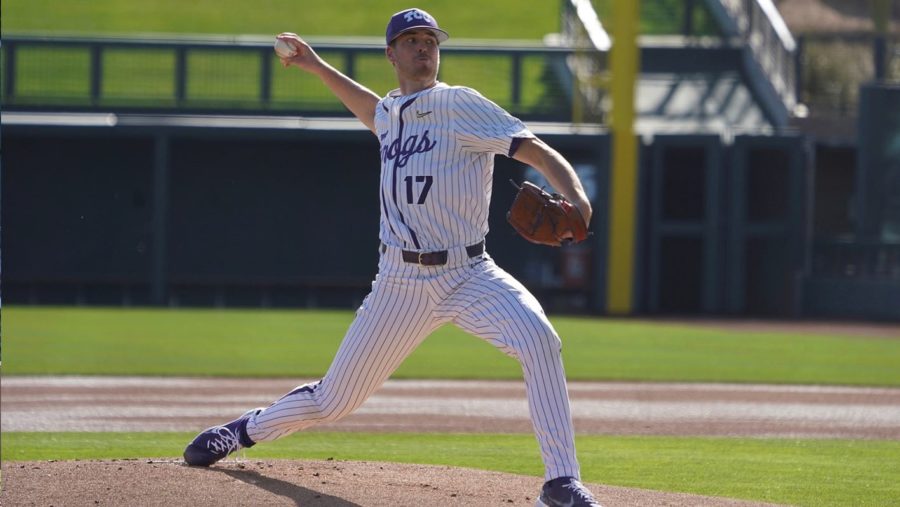 Following a long offseason, TCU Baseball has officially entered the Kirk Saarloos era. The Frogs started the season as the No. 17 ranked team in the nation and third in the Big 12 conference.

The MLB4 opening weekend tournament was a success for the squad, as they won two out of three. Shortstop Tommy Sacco and third baseman Brayden Taylor led the scorching hot offense, tallying seven hits each.

Following a weekend in which he batted .636 and had seven total hits, Taylor was named Big 12 Player of the Week for the second time in his career.

The Frogs drove in 21 total runs and allowed 10. Lupton magic was in the air in Scottsdale, Arizona, as the team rallied late on multiple occasions.

Thanks to some late game heroics, TCU took care of San Diego State 5-3 in their first game of the year.

In his collegiate debut, first baseman David Bishop knocked in the Frog’s first run of the season in the first inning to give the team an early lead.

Catcher Kurtis Byrne added to the Frog’s lead with a double to left center field in the sixth.

Shortly after, a fielding error by Sacco and a wild pitch by Luke Savage opened the door for San Diego State to score three runs and take the lead.

TCU needed late game heroics to pull off the victory, and the Frogs did not disappoint.

Taylor hit a game tying double to the delight of many in the Arizona crowd.

Bishop drove in the go ahead run with a single up the middle and a wild pitch gave the frogs some insurance. TCU went through the entire lineup in the inning.

River Ridings closed it out, picking up the save.

After a late push to tie the game, TCU fell to the University of California 7-6 in their first loss of the season.

Sacco, Taylor and right fielder Luker Boyers drove in four runs throughout the first two innings, giving the Frogs a solid lead to start the game.

Slowly but surely, Cal made its way back into the ballgame. The Bears scored a run in the fourth and hit a solo shot in the sixth. Riley Cornelio left the mound after tossing a little more than five innings, striking out five and only allowing three hits.

Both teams went scoreless for a few frames. In the eighth inning, the Cal offense exploded for four runs, taking the lead. Relief pitchers Tommy Vail and Cohen Fesser gave up the runs for the Frogs.

Down by two, TCU once again needed late game heroics to try to pull off the victory. Brayden Taylor once again came up clutch, driving in a run and shortening Cal’s lead to one.

In the bottom of the ninth, a one out triple put the Bears in a good position to seal the game. The winning run was brought to the plate from a Gray Thomas wild pitch.

Sacco and Taylor led the way for the Frog offense with two RBIs each.

Sacco tallied three hits, a walk and three runs, putting the finishing touches on an outstanding weekend for the shortstop.

Taylor once again had an excellent game, reaching base four times.

Sacco and Taylor both finished the weekend with batting averages above five hundred.

Starting pitcher Brett Taylor threw almost seven scoreless innings and struck out five. Although he put nine men on the bases, he was able to get out of every inning unscathed. The defense up the middle was effective, turning two inning ending double plays.

The Frogs were active on the basepaths, stealing five bases throughout the contest.

Designated hitter Reed Spenrath drove in four, including a two run single that concluded the ballgame in the eighth.

The No. 17 Frogs are now 2-1 on the season. Their first game at home in Lupton Stadium is Tuesday night at 6 p.m. against Stephen F. Austin State University.