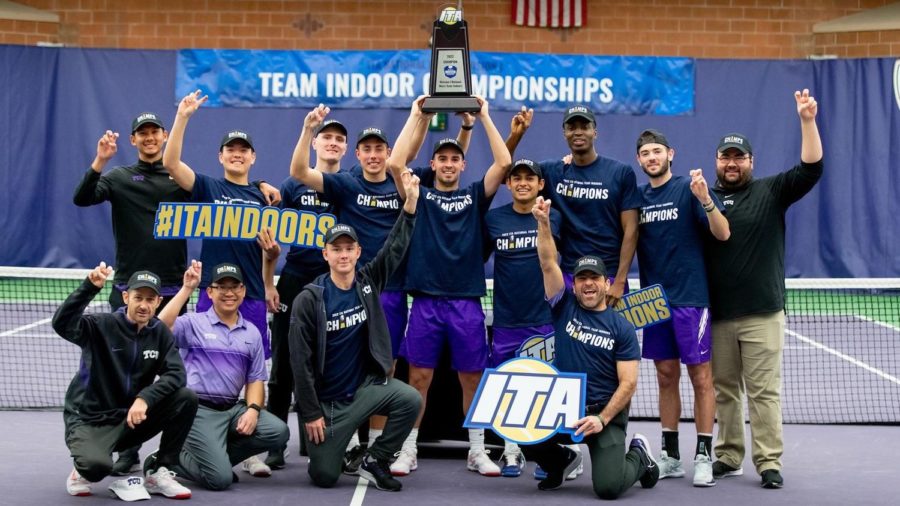 “Special day. Not just for our players, but our alumni, our Frog Family, this title means a lot,” head coach David Roditi said. “I’m super excited that our players were actually able to get that title. I feel very fortunate as a coach and very thankful to be in this situation.”

This is the first national title in the history of TCU men’s tennis.

The indoor title puts a cherry on top of a near-flawless indoor season for the Frogs. They now sit at 12-1 overall and are on a streak of 10-straight wins, the last seven of which have come against ranked opponents.

Already twice this season, TCU has knocked off the No. 1 overall team. The second of such wins came in the semifinals of the ITA Indoor Nationals Championship against No. 1 Ohio State.

The doubles point for TCU took big time performances from its top guys.

The Frogs’ second pairing, Sander Jong and Lui Maxted, pulled away from their opponents late to win their match 6-3, but the third pairing, Juan Carlos Aguilar and Tim Ruehl, fell 6-3.

It was then up to TCU’s first pairing, Jake Fearnley and Luc Fomba, and the two got the job done, winning their match 6-4 and handing the doubles point to the Frogs.

That momentum carried into the singles for TCU. After Fomba took his match, Aguilar fell in a close battle to tie the overall score at 1-1.

The Frogs then exploded for four-straight match wins, with Pedro Vives winning back-to-back sets in his match to give TCU a 4-1 singles win and seal the national title.

“For Pedro [Vives] to stay the course and keep playing when he saw Lui serving for the match or Fomba up a set, he never stopped playing and that was awesome,” Roditi said.

The win was the Frogs’ fourth of the year over a top five opponent.

Now moving into its outdoor season, TCU has a quick turnaround, as it will host the University of Michigan on March 2 on its signature purple courts to begin outdoor play.