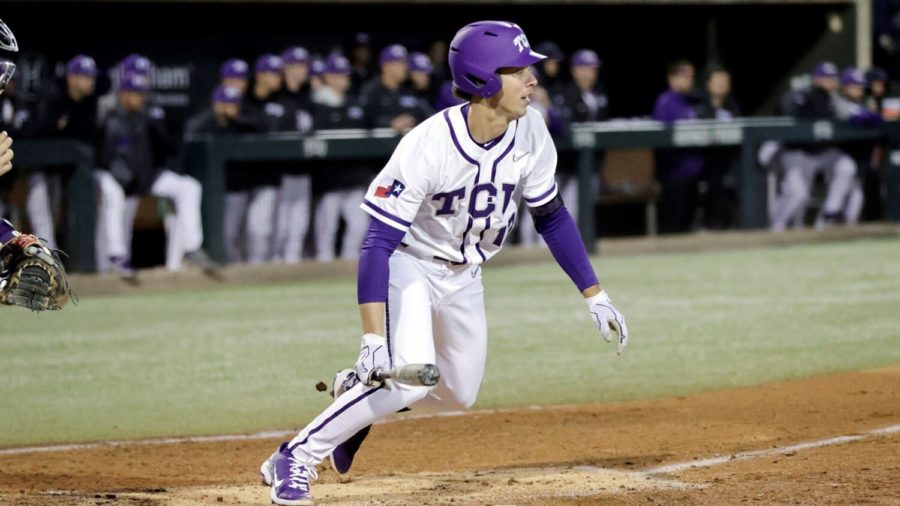 David Bishop drives in five runs off three hits, including the first home run of the season for the Frogs, as they beat SFA 11-1. (Photo courtesy of go frogs.com)

The temperature at Lupton Baseball Stadium was cold on Tuesday night, but TCU baseball remained hot, beating Stephen F. Austin State University 11-1 in its first home game of the season.

“We have more guys who are built for this, who grew up in this,” head coach Kirk Saarloos said. “The weather was not going to be talked about, we’re ready to play in anything and everything.”

Cam Brown started the game on the mound, pitching five scoreless innings. He struck out seven, only giving up two hits. Brown said he thinks anything is possible for this team with the right mentality.

“I want to be a big part of this team,” Brown said. “I want to help our team have success. The only way I’m going to do that is if I believe in myself as much as my team believes in me.”

First-year first baseman David Bishop led the way offensively for the Frogs with five RBIs and three hits. He hit his first career home run as well as the first for the Frogs this season. Bishop was grateful for the opportunity to play and to hit cleanup.

“I’m just really blessed to have an opportunity to show my [skillset] and be an impact on the team,” said Bishop. “It’s a good feeling coming out and living up to the four spot.”

TCU’s offense only put up seven hits on the day but was still able to score 11 runs.

“We got a lot of stuff for free tonight,” said head coach Kirk Saarloos. “I’d like to see us be a little bit more offensive swinging the bats.”

Due to poor weather conditions, TCU’s Wednesday game against the University of Texas at San Antonio was canceled.

TCU’s next matchup will be a tough one, as it takes on Nebraska in a weekend series at Globe Life Field. The first pitch of the series is Friday at 6 p.m.