TCU basketball falls apart in second half against No. 20 Texas 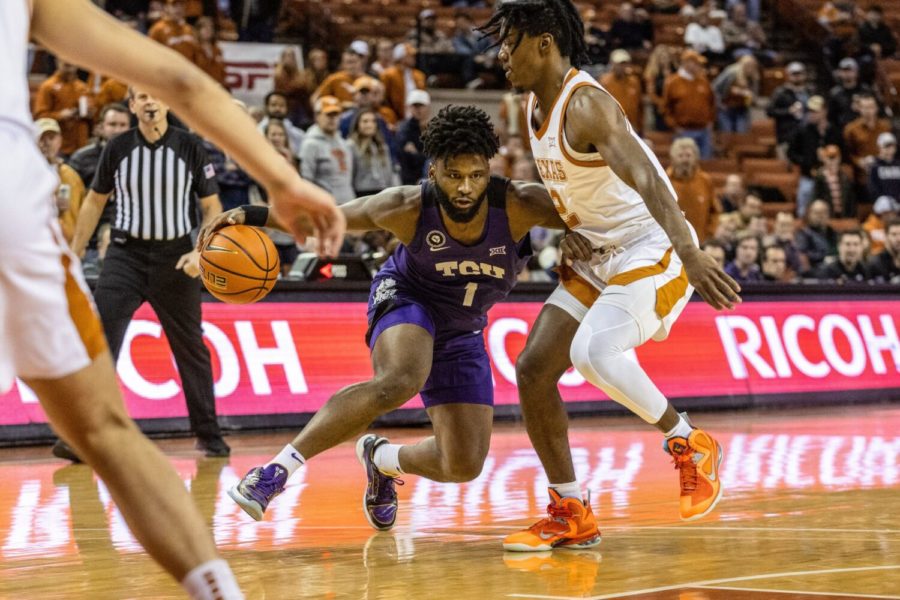 TCU guard Mike Miles dribbles while defended in TCU's loss to No. 20 Texas on Feb. 23, 2022, in Austin, Texas. (Photo courtesy of gofrogs.com)

For TCU basketball, that mantra has been real in the form of a rude awakening over the last month. Desperately needing wins to make the NCAA tournament, the Frogs have now led at halftime in three of their last four losses.

The most recent of those blown leads came on Wednesday night in Austin, as the Frogs blew a 35-30 halftime lead to the No. 20 Longhorns in a game they had in the palm of their hand.

“They were certainly the more physical team. They knocked us all over the place, especially in the second half,” head coach Jamie Dixon said. “Give them credit for doing that.”

TCU led 48-38 with 13:30 to go in the game, but an explosion of offense by Texas and poor composure by the Frogs led to the Longhorns ending the game on a 37-18 scoring run.

Texas guards Andrew Jones and Marcus Carr combined for 40 points in the game, with 31 of them coming in the second half. The duo shot a combined 14-for-16 from the free-throw line.

Keeping the Longhorns off the foul line was something the Frogs struggled with all night. Texas went 24-for-29 from the charity stripe, while TCU went a measly 8-for-11.

Looking his best since early January, guard Mike Miles scored 12 points in the second half alone, but TCU was limited by 10 second-half turnovers that led to 18 points for the Longhorns.

Miles finished with a team-high 17 points and two steals.

To add insult to injury, the Frogs were outrebounded (30-28) for just the fifth time all season. Despite getting six rebounds from forward Eddie Lampkin, who returned from injury, TCU had zero other players grab more than four boards.

“We’ve got to do a better job of getting to the line,” Dixon said. “They were certainly more physical than us. The turnovers stood out for us, and that’s something we have to improve on. Then, we got outrebounded.”

Besides Miles, guard Micah Peavy was the lone Frog to finish with double-digit points (11).

During a strong first half for TCU, the energy and hustle of Lampkin paid off right away, as he drove past his defender for an acrobatic layup to score the Frogs’ first points of the game.

The Longhorns punched TCU right back, though, going on a 7-0 run to put the Frogs in an early 8-2 hole.

TCU stayed right with Texas through the first eight minutes thanks to a balanced scoring attack. Each of the Frogs’ first five buckets came from different players.

Miles was the first TCU player to score twice, hitting a floater with 12:06 left to tie the game at 14. The Frogs would then continue to score and stretch their run to 10-0, putting them up by 5.

For the rest of the half, the most unanswered points that either team would see was 4, as the two teams went back and forth. The Frogs led by 5 (30-25) again with 4:33 to go, but they could never build on that.

A corner three by guard Francisco Farabello at the halftime buzzer put TCU up 35-30 at the break following what had been as good of a half as the Frogs had played all year.

Through the first 20 minutes, TCU shot 65% from the floor and made five of their seven 3-point attempts on seven assists as a team.

The only thing keeping the score close at that point was free throws, as the Longhorns had gone to the line six times (7-for-11) compared to zero free throw attempts for the Frogs.

Carr put Texas on his back to start the second half, and TCU could not stop him. The Minnesota transfer went on a personal 6-0 run to cut the Frogs’ lead to one just over two minutes into the half.

It was then Miles’ turn to take center stage. The sophomore scored 6 points over a four-minute span, leading TCU on an 11-2 run that gave the team its biggest lead of the game at 48-38 with 13:20 to go in the game.

They say basketball is a game of runs, and that was certainly true on Wednesday. Texas immediately responded to the Frogs’ lead with a 17-2 run of its own, putting TCU at a deficit for the first time in nearly 24 minutes of play.

Jones had started that run with a 5-0 run on his own, scoring 10 of Texas’ 17 during its offensive outburst.

With 4:26 to go, the Frogs’ deficit was up to eight, and the Longhorns looked to run away with it. TCU was not going to go away that easily, though, pulling within 3 with just under three minutes on the clock.

Texas instantly responded with a 5-0 run, though, and the Frogs were never again able to produce the defensive stops needed to get back within reach.

Though the Longhorns missed all eight of their 3-point attempts in the second half, they went an impressive 14-for-22 (64%) from inside the arc.

“We’ve got to get ready for Saturday,” Dixon said. “We have an opportunity. We have a home game. We’ve obviously played a unique setup here: having a Monday, Wednesday situation and a Saturday.”

Next, TCU heads back home to Schollmaier Arena for a matchup with No. 9 Texas Tech. Tipoff in Fort Worth is scheduled for Saturday, Feb. 26 at 5 p.m. on ESPN2.