Miles ‘puts on’ for Fort Worth, leads TCU basketball in upset over No. 9 Tech 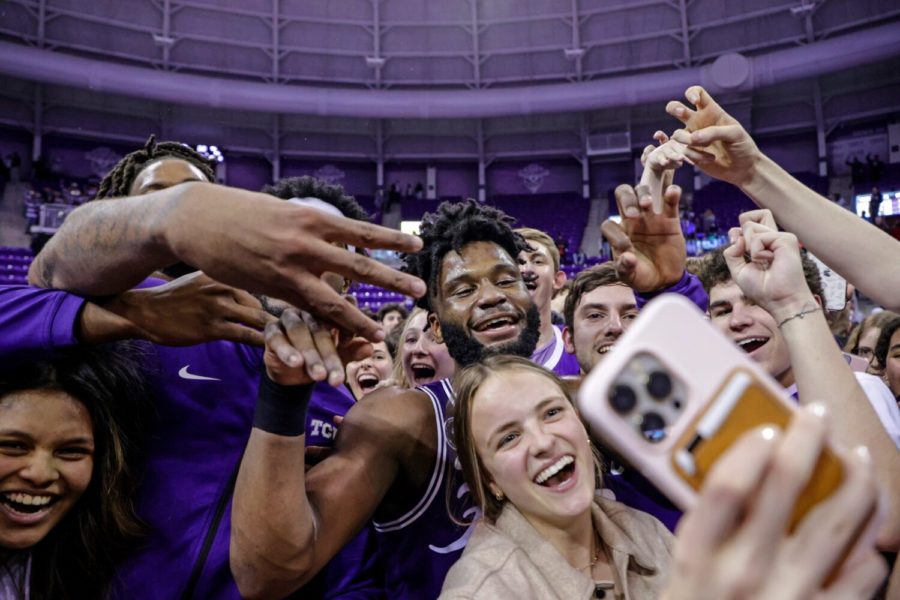 “I’ve decided to stay home and put on for the city that made me.”

When Mike Miles committed to TCU over a multitude of other Power 5 schools, the Lancaster, Texas native said that short, powerful phrase in reflection of the goals he had for his time in the purple and white.

Two years later, Miles had the game of his life against No. 9 Texas Tech in front of a nearly packed-out Schollmaier Arena to all but seal an NCAA tournament berth for TCU.

When asked postgame if nights like Saturday’s were what he envisioned when he said that phrase, Miles said that’s “exactly” what he meant.

“I feel like that’s a great example of it,” Miles said. “It was huge getting that win and everybody coming on the court and taking pictures with everybody.”

Once the outcome of the game had been sealed, thousands of TCU students and fans stormed the court. Miles stayed on the court for nearly 30 minutes afterward to take pictures with nearly every fan that asked.

To most college basketball insiders, the seven-win mark, especially coming against a top-10 opponent, ensures a berth to the NCAA tournament for the Frogs.

“I mean only time can tell. I believe this team is a tournament team,” forward Emanuel Miller said. “I have complete trust in my teammates, especially these two right here [pointing to Miles and guard Micah Peavy]. I think we have proven enough that we are one of the best teams in the country.”

Miller joined Miles in double figures on the scoring end, putting up 11 points to go with four rebounds, a block and a steal.

Behind 14 steals, TCU forced 20 total turnovers on the night, which was a season-high for Texas Tech. On the other side, the Frogs committed just 13 turnovers.

Trailing for most of the game, the Frogs took the lead for the first time in almost 25 minutes of game time on a 3-pointer by guard Francisco Farabello with 3:47 left to play.

From there, the teams went back and forth before a dunk by center Xavier Cork followed by a pair of turnovers and a pair of misses by the Red Raiders sealed the win for TCU.

“It means everything. It shows how much fight we have in us. It shows how much we’re determined to win. It shows we can overcome anything,” Miller said. “We had a stretch where we lost three games in a row, and I think as a team collectively, this is the best way you can answer a challenge – Tech, at home, with a lot of Red Raider fans in the crowd, our great student section in the crowd. This is everything.”

Forward Bryson Williams got Texas Tech’s final look at tying the game, but the few tenths of a second left on the clock did not even leave enough time for his attempt to count.

Williams was a forced to be reckoned with all night, leading the Red Raiders with 21 points on 8-for-9 shooting.

There was an electric buzz in Schollmaier Arena to start the game. The crowd was nearly half Red Raider fans, and all but a few seats were filled.

Throughout the first half, the two teams traded blows. Williams scored the first 7 points for Texas Tech, but TCU held pace, tying the game at 7 apiece on a Miles three-pointer.

The Red Raiders then grabbed a 6-point lead, but the Frogs responded with a resounding 14-4 run to go up by 3 with 8:27 to go in the first half.

Four different TCU players scored during the run, with Miller leading the way with 5 points on his own.

Fueled by the thousands of fans that traveled to cheer them on, Texas Tech responded with a run of its own, scoring 10 unanswered points to take a 30-23 lead.

“Obviously they had some people here, but that’s a challenge,” head coach Jamie Dixon said of the opposing fans. “We’re a smaller school in a place where everybody wants to live, and this is where the jobs are. So, it’s a good thing. I like to live in a good place, so do a lot of people. We battle, we’ve got to find ways, we’re much smaller than everybody else, but I knew that coming here.”

The Frogs got as close as 3 with just over two minutes left before halftime, but a 5-0 run by guard Adonis Arms for the Red Raiders put TCU down 41-33 going into the locker room.

In the first 20 minutes, Miles had scored 14 points on his own, as the All-Big 12 guard was doing all he could to keep up with 61% shooting from Texas Tech to that point.

After scoring 11 points in the first half, Williams continued to score in the second half, hitting an impressive sky hook to give the Red Raiders an immediate 10-point lead.

“He’s [Williams] hard to guard. He really is,” Dixon said. “Plus, he makes his free throws. [A] couple of the drives were really tough. He went left one time, went right one time. That says a lot.”

Williams finished a perfect 4-for-4 from the charity stripe.

Miles continued to keep the Frogs in the fight, though. He scored TCU’s first 5 points of the second half, and his third 3-pointer of the game cut the deficit to 8 with just under 16 minutes to play.

The Frogs began to feed off the energy of their leader, putting together a 10-2 run that was capped by a strong and-1 layup by forward Eddie Lampkin.

TCU pulled within 4 moments later, but Texas Tech seemed to always have an answer. The Frogs’ deficit fluctuated between 4 and 8 for the next eight minutes of game time.

With just under four minutes to play, Farabello caught a pass, pump faked, and calmly drilled a 3-pointer to put TCU ahead (61-60) for the first time since midway through the first half.

That spurred a dogfight between the two teams, and the lead changed six times over the next three minutes.

Finally, TCU got a score to take the lead on Cork’s slam and a stop on the other end, giving the Frogs the momentum they needed to secure a victory.

Cork finished with 6 points, making all three of his field goal attempts. Following his big dunk, the characteristically quiet big man tapped his head in the “on his head motion” to let his defender know that he had just been dunked on.

While TCU saw little to no advantage when it came to number of fans in the stands, it was those from the city of Fort Worth celebrating on the court postgame as the thousands of the Red Raider fold trudged to their cars.

“To do it at home, with all the fans storming the court, it’s everything,” Miller said. “It just shows how much we are a family at this school. It shows how much they care. They could’ve given up on us, but we have the realest student section in the country.”

Following its big win, TCU is set to face a gauntlet next week, taking on No. 5 Kansas twice. The first matchup is scheduled for Tuesday in Fort Worth. Tipoff is at 7 p.m.