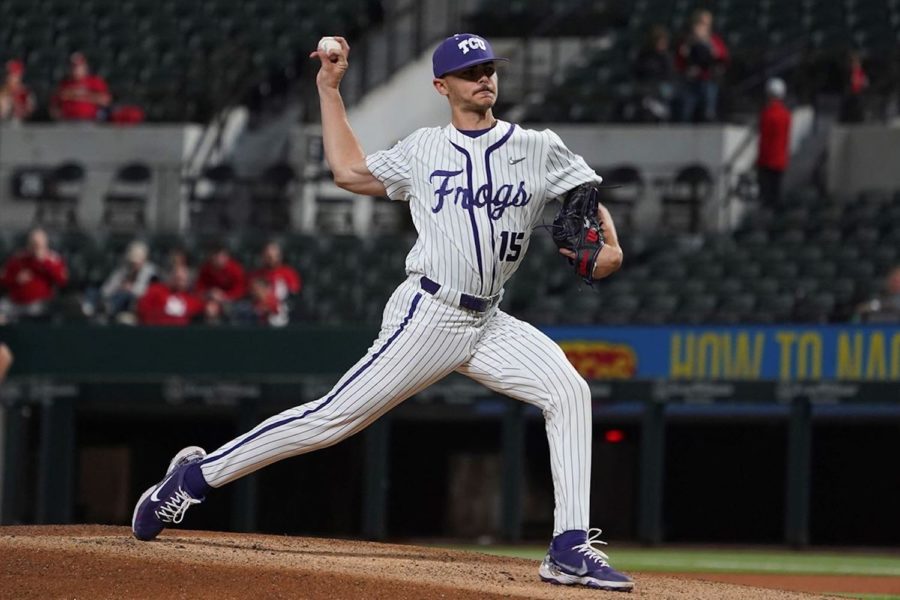 Starting pitcher Riley Cornelio gave up three hits and struck out seven, securing the win for TCU over Nebraska on Feb. 27, 2022. (Photo courtesy of go frogs.com)

The Frogs did not trail at any point during the series.

Krob, who hasn’t given up a run this year, threw six scoreless innings, giving up two hits and striking out six.

The game was relatively quiet for both teams on offense, but the Frogs capitalized on two big at bats from Bishop and shortstop Tommy Sacco to pull ahead from the Cornhuskers.

Sacco hit his first homer of the year, a solo shot to left field in the third inning, giving TCU the lead.

Bishop then hit a bases-clearing double in the fifth, driving in three runs to give the Frogs some insurance.

Relief pitcher Luke Savage had a rough night, giving up two hits and hitting a batter in less than one full inning, leading to the sole Nebraska run in the game.

Reliever River Ridings got the four out save, striking out three batters.

Nunez, after not playing in the opening game of the series, had a stellar night, driving in four runs to help TCU beat Nebraska 8-3.

Right fielder Luke Boyers hit a home run in the first, securing an early lead for the Frogs.

After starting pitcher Riley Cornelio shut down the Huskers for the third straight inning, designated hitter Reed Spenrath added to the lead with a double down the right field line, scoring second baseman Gray Rodgers.

Soon after, Nunez hit a single that drove in two more, giving TCU a commanding 5-0 lead.

Nebraska chipped away at the lead as Cornelio gave up a single and then a homerun in the fourth.

With that inning being the exception, Cornelio was dominant throughout. He gave up three hits and fanned seven in six innings.

Rodgers hit a two out double in the sixth, bringing Bishop home to score. Rodgers ended the inning getting thrown out trying to advance to third.

After giving up a solo shot the following inning, Nunez responded with a two run single for the second time this game.

Nebraska failed to respond, giving TCU their second win of the series.

TCU swept the series against Nebraska on Sunday afternoon, winning the third game 5-3 after a controversial call ended the ballgame.

The Frogs once again scored early with a Bishop single to right field, scoring Nunez, who had two hits on the day, and leading the team.

After starting pitcher Brett Walker gave up a run to the Huskers in the third, Gray Rodgers responded with a double down the left field line, scoring third baseman Brayden Taylor.

The Frogs added to their lead with a big fifth inning, scoring from a Boyers single, a Taylor double and a Rodgers fielder’s choice.

Walker had a solid outing, giving up two runs in seven innings and striking out six. Relief pitcher Marcelo Perez took over, giving up one unearned run due to a passed ball.

In the ninth, Ridings loaded the bases, giving Nebraska an opportunity to tie or take the lead. The game ended in controversy after Taylor fielded a slow bouncer and made a snappy throw to first base. The umpire called the runner out, even though he was clearly safe.

The Nebraska coaching made their disdain clear, but the weekend series came to a close.

Looking to extend their win streak, TCU will next play UT Arlington in Fort Worth on Tuesday at 6 p.m.